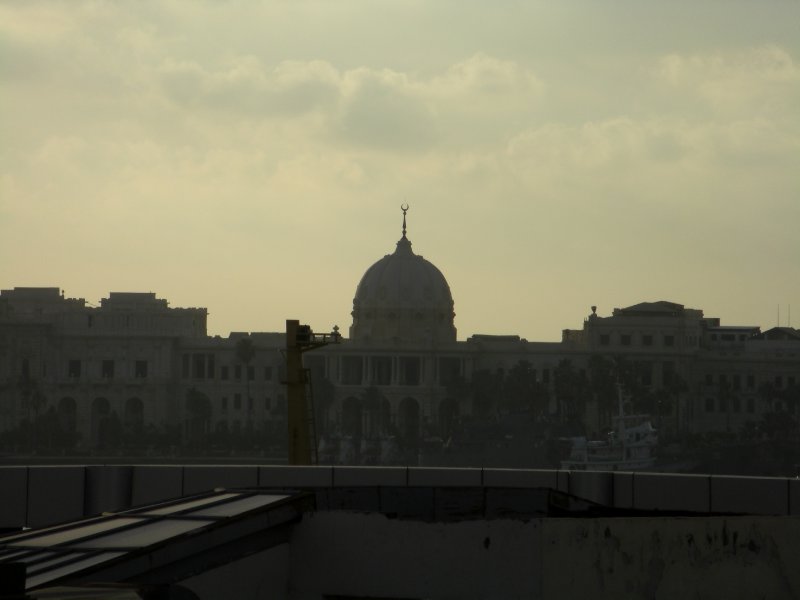 Saturday morning, we dock in Alexandria. My phone rings at 7am, requesting that I come down to the medical center. When I arrive, they take my temperature, and send me back to the room to wait. About an hour later, the phone rings and I'm released from quarantine.

I desperately try to contact Mr. David to see if I can resuscitate our tour, but I'm unsuccessful. I fly to the excursions office to see if there are any openings still available that can get me to Cairo, but alas, it is just too late. The convoy is getting ready to leave, and I'm not in it. I check with Joe May, the port expert, to see if tour operators are normally present at the port. He shakes his head and tells me that once the convoy leaves, there is no hope, as no independent operators will be available at the pier.

Not having eaten for well over 24 hours, and banned from the buffet (ship's rules...noro cases are requested to refrain from the buffet for an additional 2 days), we head to the dining room for breakfast. I order egg beaters. I receive a plate of chopped up soft-boiled eggs instead. I feel like crying.

Despondent, I wander down to the dock and browse through the souvenir stands, and chat a bit with Yousef, one of the vendors. The only other people at the pier are the local blue taxis, who are not interested in taking us to Cairo. As I'm preparing to head back to the ship with a few trinkets, a fellow in a red shirt approaches. He identifies himself as Mr. Mahruos, and claims to be a licensed tour guide. I take a look at his laminated badge. I have no idea if it's real or not. He points to a van in the far parking lot, and offers to take me to see the pyramids for a reasonable fee. 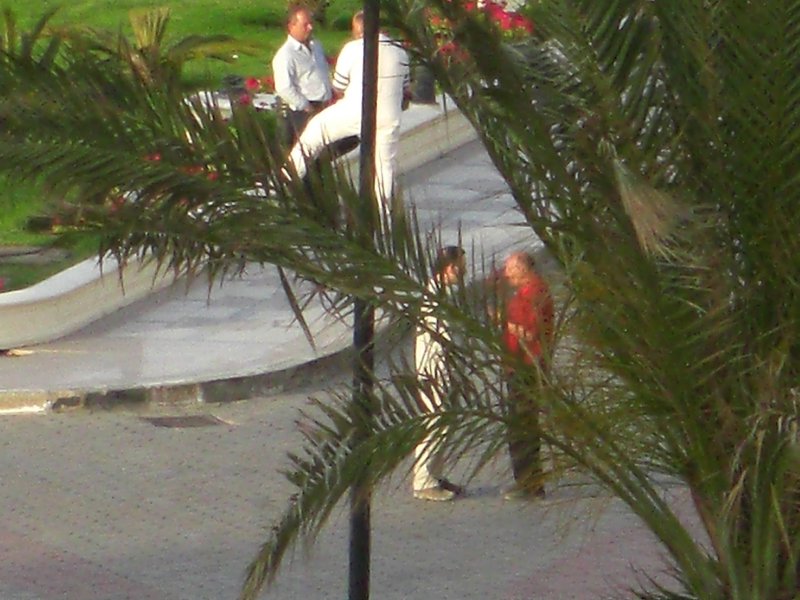 Mrs Z, wondering what the covert meeting was all about

I tear back to my room and let Mrs. Z know. We debate a few moments if it is wise to go driving off with a total stranger with no references in post-revolution Egypt. Given the unlikelihood of ever returning to Egypt again, we decide to take the risk, and quickly get our stuff together.

Mahruos has a driver with him, whose name escaped me if it was ever even mentioned. His mini-van is actually very well kept, and we begin to feel a bit more at ease. Mahruos's English is somewhat limited, so he spends much of the three hour drive along the "desert route" to Cairo talking with his driver, but he does periodically fill us in on the sights along the way. 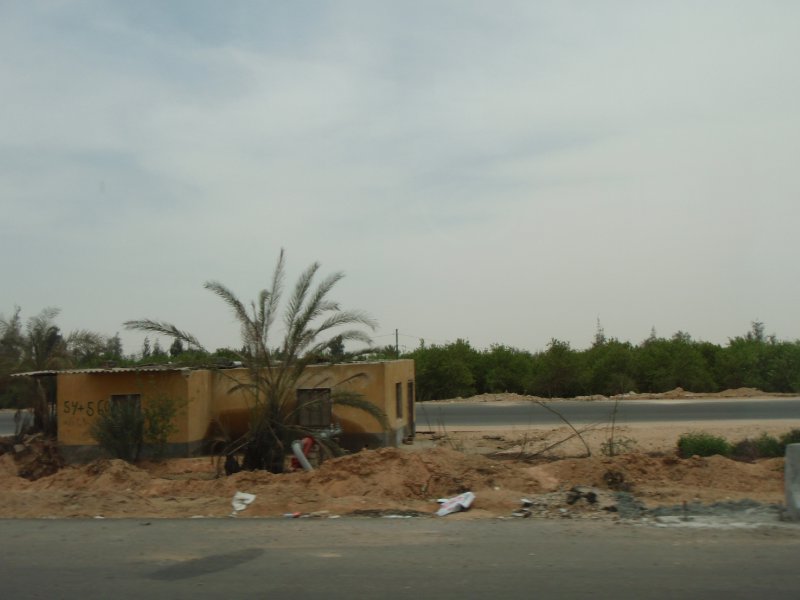 Scenery along the desert road

Mahruos tells us that we are the first customers he has had since January, prior to the revolution. The people in the tourism industry are really hurting. We are the really the first large ship that has made port in Alexandria in months.

Three hours and one rest stop later, we arrive in Cairo.

The first order of business is to head up to the plateau overlooking the pyramids. There is a turnout where there is a perfect vantage point for photos with all three of the main pyramids framed against the city of Cairo. It's really quite amazing how close the city actually is. 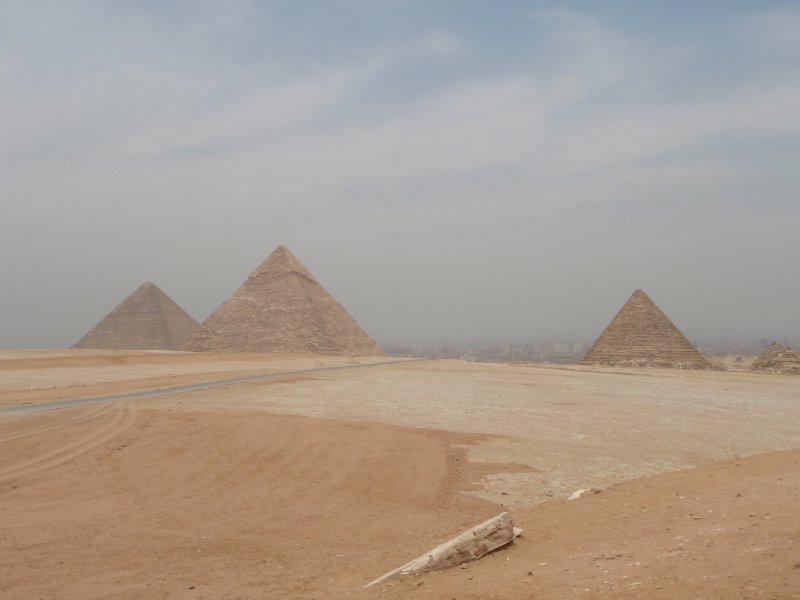 The Pyramids at Giza

It's very quiet here. There are few tourists, and due to our late start, most of the cruise-shippers have already come and gone. Vendors are persistent in their attempts to sell us trinkets. We would be willing to purchase some and spread some money around, but Mahruos is adamant that we avoid interacting with them. We drive back down the road so that we can approach the pyramids themselves. 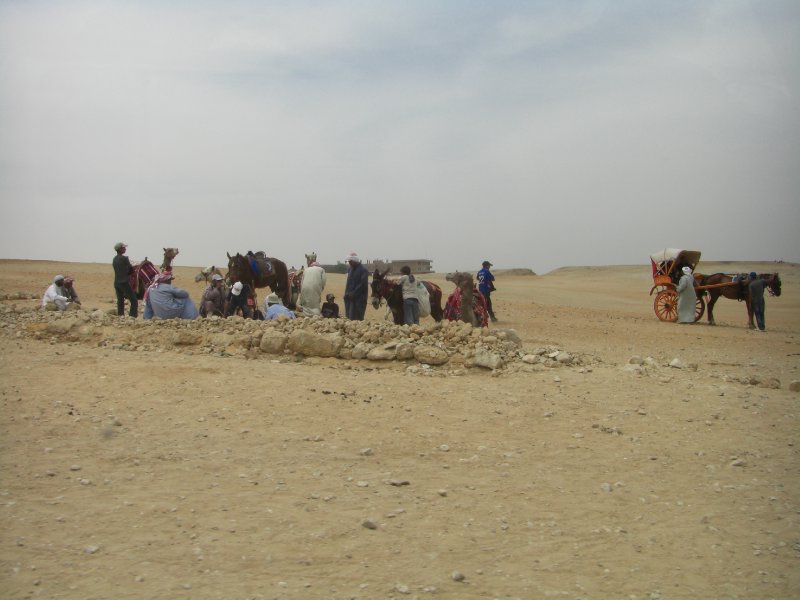 I've seen the pyramids a thousand times, in books, movies, & TV. Until I stood there in person, I never really appreciated the enormous scale of these structures. No matter what you may think, the pyramids are simply bigger than you imagine (and the Sphinx is probably a good deal smaller than you imagine). To paraphrase Mrs. Zukini, "Wow!" 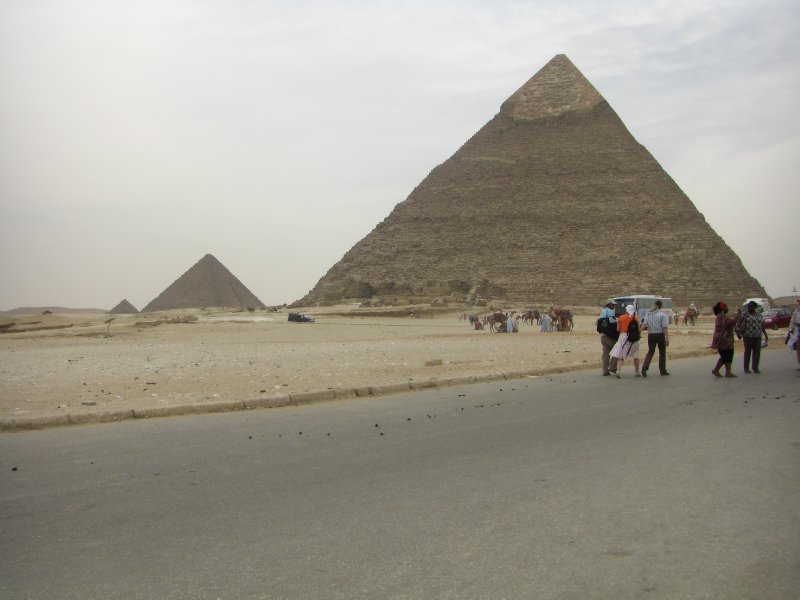 I'm sure you've all seen photos of the blocks that make up the pyramids, much like this one: 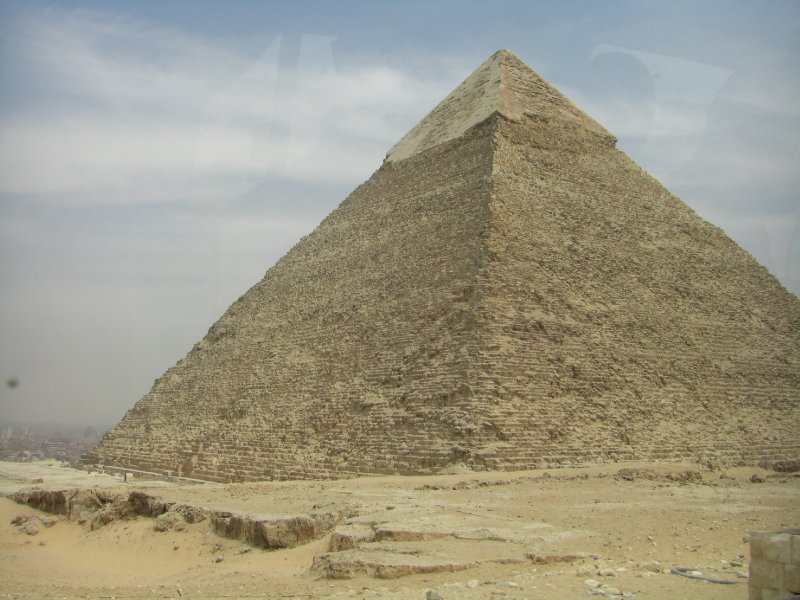 But, until you stand next to just one of those rows of blocks, it's difficult to conceive just how enormous they actually are: 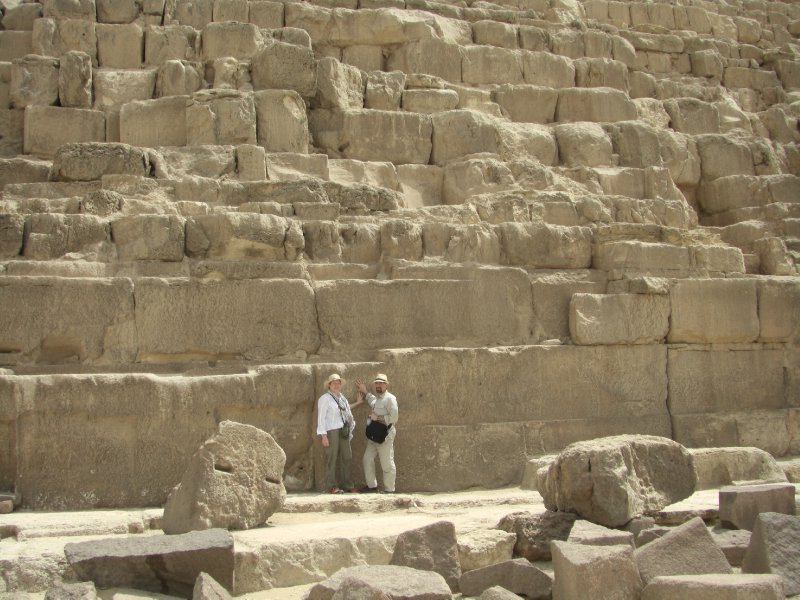 Dwarfed by the Great Pyramid

We next move on to the Solar Boat. Found disassembled and carefully wrapped in a tomb of its own in front of the Great Pyramid, this boat was meant to convey the Pharaoh on his journey to the next life. It has been completely reassembled and installed in its own exhibition hall right next to the pyramid, and should not be missed. 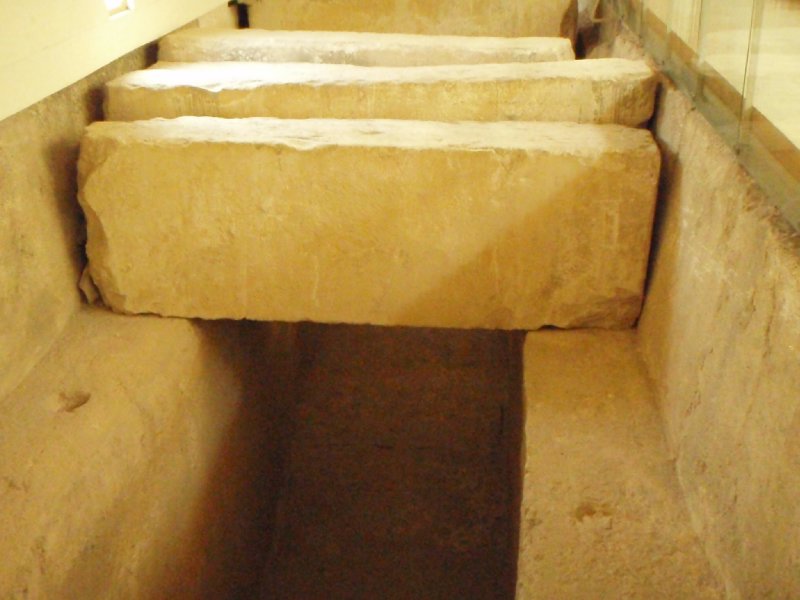 Tomb of the Solar Boat 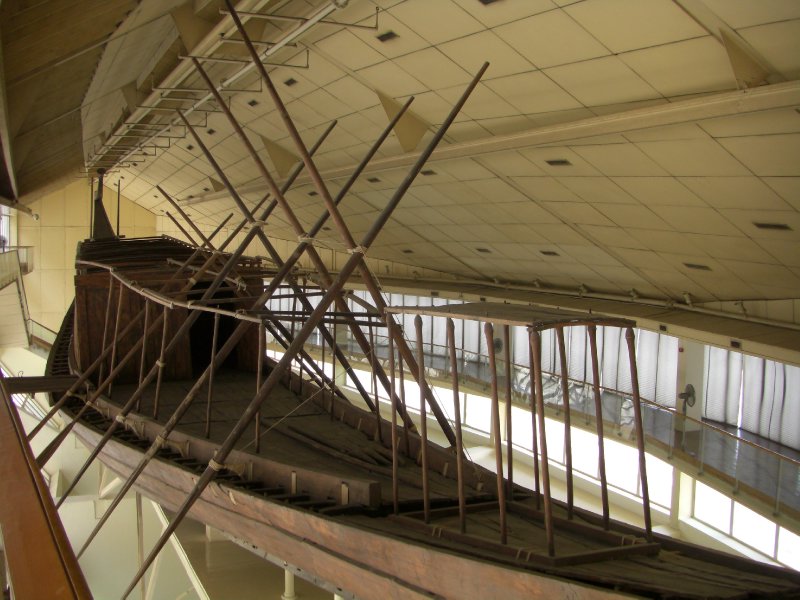 Finally, we move over to the Sphinx compound, where we are encouraged to drop a few Euros through a grate in the floor for no comprehensible reason. 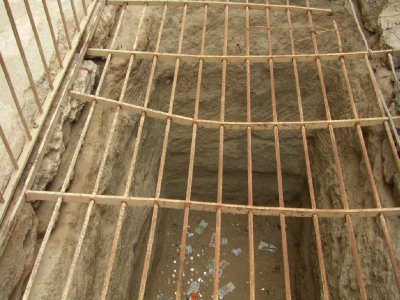 As I mentioned, it seems to me that the Sphinx is actually much smaller than I've imagined it to be, but an impressive sight, and one we very nearly didn't have the opportunity to see. 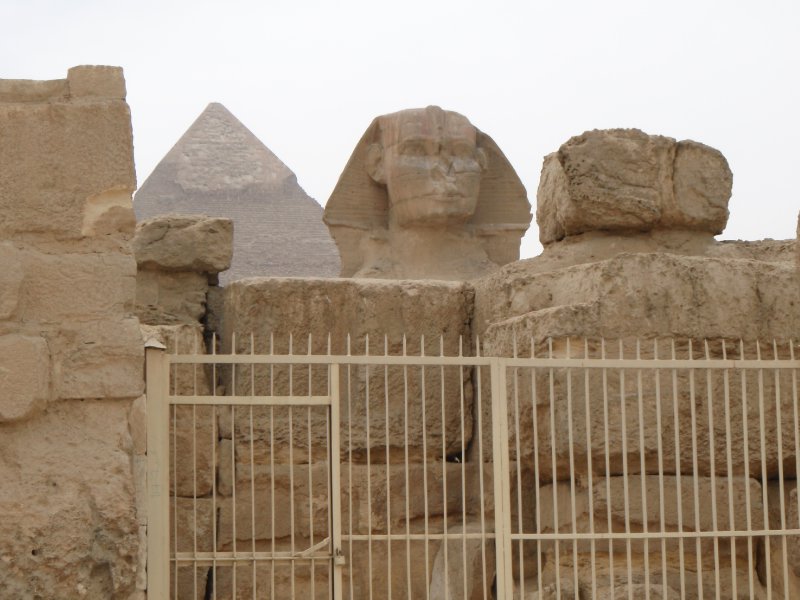 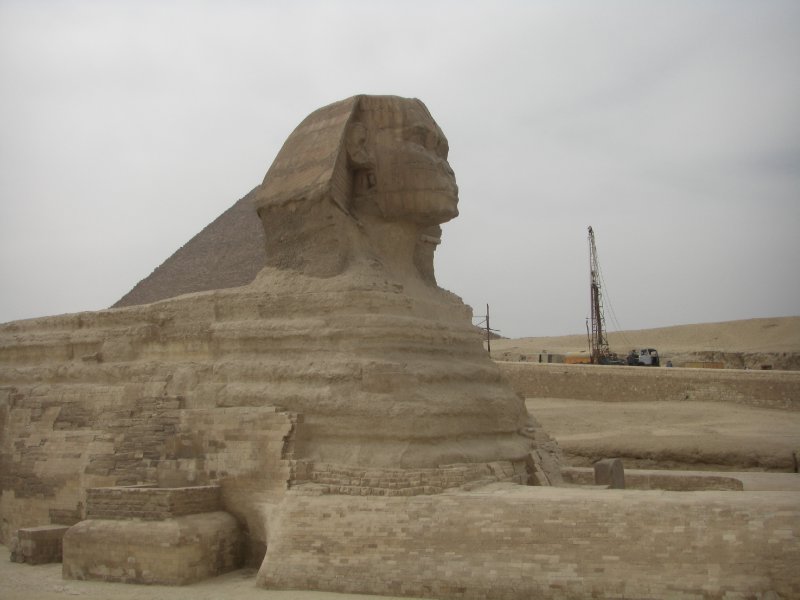 It's starting to get late. Mahruos offers to set us up at a hotel for the evening, but we decide that we would prefer to head back to the ship. I'm still not feeling my best, and there's still the possibility that Mrs. Z may become ill, so it seems a wiser course to call it a day. Mahruos pressures us into a stop at close, claustrophobic perfume shop, but we quickly bail out of there for the three hour ride back through congested Alexandria traffic. When we arrive back at the ship, Mahruos waits while I head back to our stateroom for the Euros I need to pay him.

We did it! We made it to the pyramids, although not nearly the way we had planned. I feel terrible that we couldn't reach Egypt Private Excursions, especially when he contacts us later that evening to express his concern for my health, and his regret that we missed our opportunity to visit his country. I don't have the heart to tell him that we found another operator, especially after seeing first-hand how the economy in Egypt has been affected by the revolution.

(For those of you who may have seen my review of this trip on another website, you may have noticed that in that review I omitted that we ultimately made it to Cairo. I truly felt horrible about stiffing Mr. David, and did not want him to know that we found a guide at the pier after cancelling with him, and I knew he had been following my posts in that forum. Mea culpa.)

We discover that our decision to avoid the overnight stay turned out to be a smart one a few minutes past midnight, when Mrs. Z is hit hard by the same virus. When the medical center suggests that she should come pay them a visit, our biggest question is how, exactly, is she supposed to DO that??? They reply that a laundry bag or two might be helpful.

So, several injections of anti-nausea drugs later, our quarantine is reinstated. This time, we stay together, since I've already been exposed. The med center suggests that the current passenger complement skews a bit older than it normally would, and is therefore more at risk for serious complications. I'm asked to be very cautious and to avoid exposing other passengers as much as possible.

The second quarantine lasts a full 50 hours, so there's a pretty long gap where I can't describe much about shipboard life, except to talk about the unsung heroes. The "special team" that takes care of quarantined passengers have got to have one of the worst jobs in the world, yet they do it with courtesy and with a smile (I think...they often were wearing masks). Not only do they have to work with bio hazardous wastes, they have to deal with grumpy and disappointed passengers, and the near certainty of getting sick themselves, all on a crew member's wage. I'm sure this isn't the duty they signed up for, and my hat's off to them.

Next entry, we'll be skipping ahead to our release from quarantine the morning of our port call in Chios. Don't worry, it gets better from here, and the photos shall return. 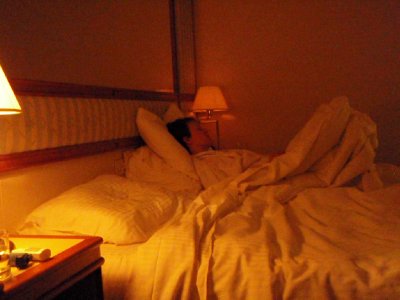