An Evening Stroll Through Rome

After visiting the Vatican, we take a long, rambling stroll through Rome. Our path will take us across the Ponte Vittorio Emanuele II, along the Lungotevere, and up to Piazza della Rotunda for second look at the Pantheon. Exhausted by our day at the Vatican (and LONG walk back) we stop at a restaurant near the apartment for a bite to eat. Some simple Roman pizza bufalina and delicious homemade tiramisu, and we're refreshed and raring to go.

After revisiting the Pantheon, we head up to Piazza Colonna. While the Piazza has a famous column, we have an ulterior motive. 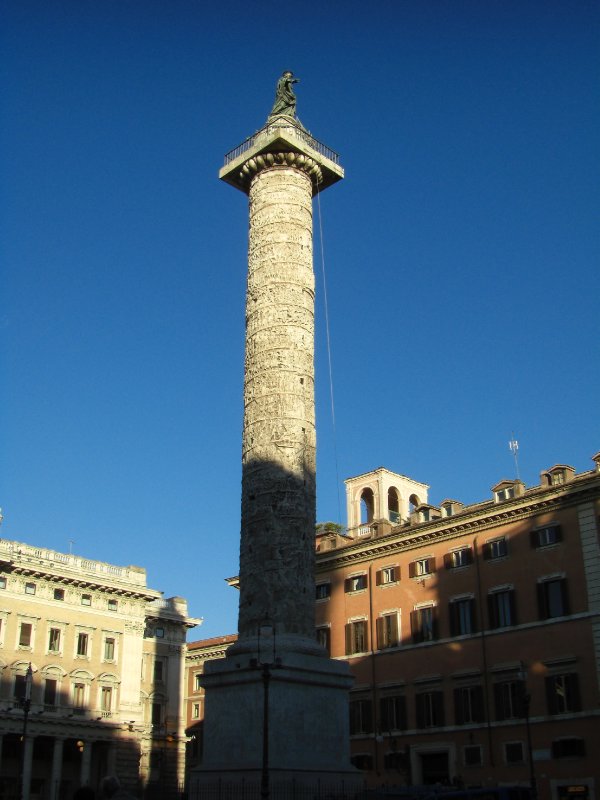 Nearby is a gelato place we've heard about in various guidebooks, Giolitti's. Now, we ate gelato constantly during our visit to Rome, and you can really tell the differences in quality between the different places. Giolitti's was simply the best we tried, and worth going out of your way for. Stop at the register first, and order your cup or cone. Then take your receipt to the counter and sample pure wonderfulness. I find pistachio is a great gauge of gelato quality...the pistachio at Giolitti's is stuffed with crunchy nuts and creamy goodness. DW had a stracciatella and nutella mix that was out of this world. After eating at Giolitti's, no gelato anywhere else ever compared.

Next stop is an obelisk erected at Piazza Montecitorio. I have to wonder if there are any obelisks left in Egypt...13 of them are scattered around Rome, and we saw them in a few other places on our trip as well. 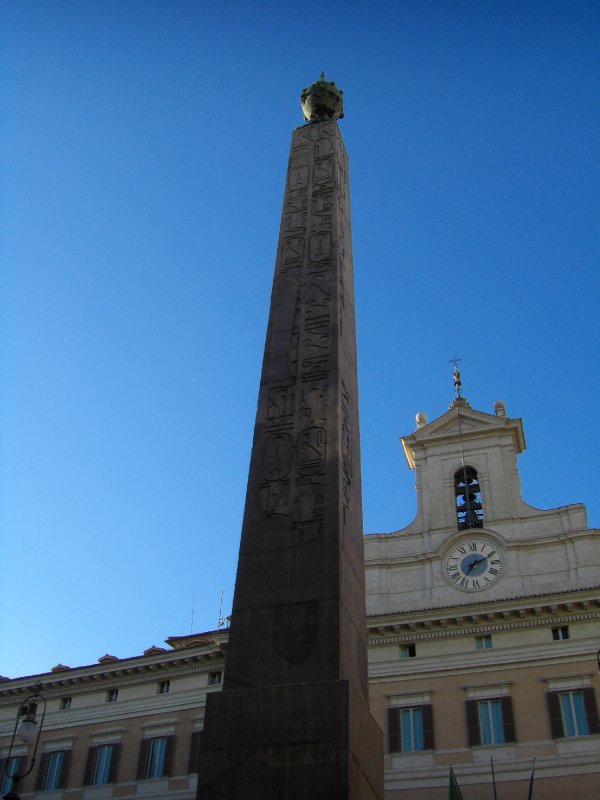 We wiggle around the narrow streets, turn a corner, and are stunned by an overwhelming baroque fountain, jutting out of the front of a building and into the tiny square. This is the Trevi Fountain, perhaps the most famous fountain in the world. Once powered by the Vergine Aqueduct, it is now run by modern recirculating pumps, but is as impressive as ever, towering 85 feet over the piazza. 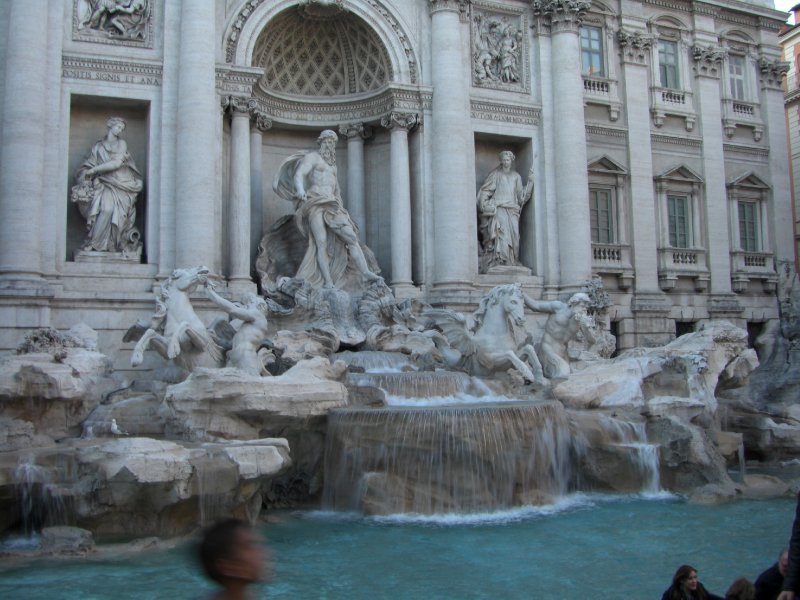 We toss our coin into the fountain, adding to the 3,000 Euros that are dropped into it each day. We expect our coin will guarantee good luck and a return trip to Rome, but it certainly will help provide for the needy, as all money collected from the fountain goes to a free supermarket for the poor.

We headed up to Piazza Barberini to catch the metro. The metro lines in Rome are very straightforward. You have a red line and a blue line, and the stops are clearly laid out. We took the red line to Piazza Spagna, the Spanish Steps. Darkness was just starting to fall, and street vendors were out with glowsticks and such. A relaxed, fun atmosphere. 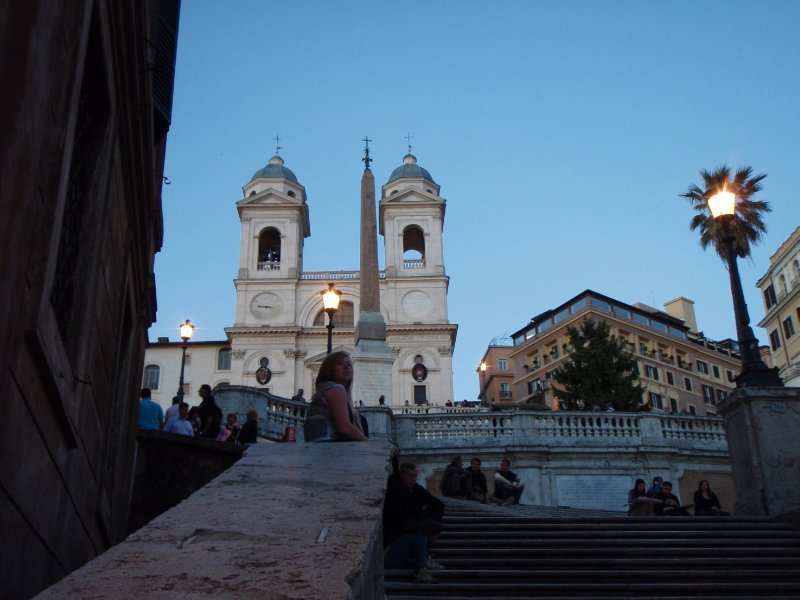 Dusk at the Spanish Steps

Our feet were starting to get a little worn out by this point, so we found the 116T bus (which we now affectionately refer to as the "Bronco Bus") and took a jouncing, jostling ride down to Piazza Navona. By now, it was full dark. The piazza was filled with artists and vendors and strolling musicians. The restaurants were all open, and it was just what you would picture it to be. Pure romance. 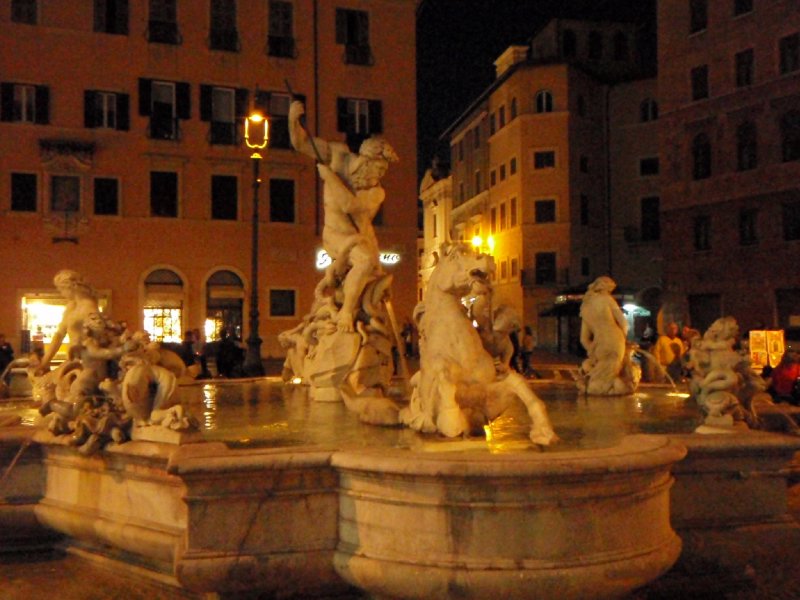 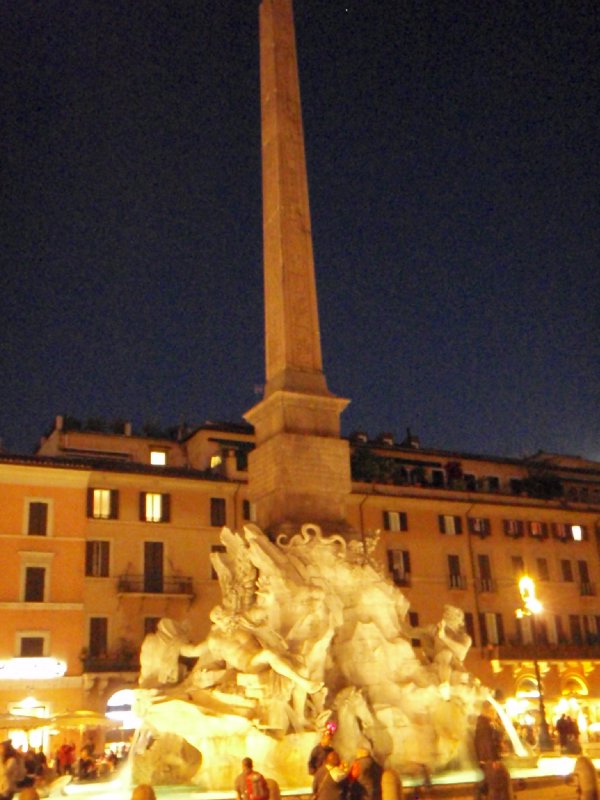 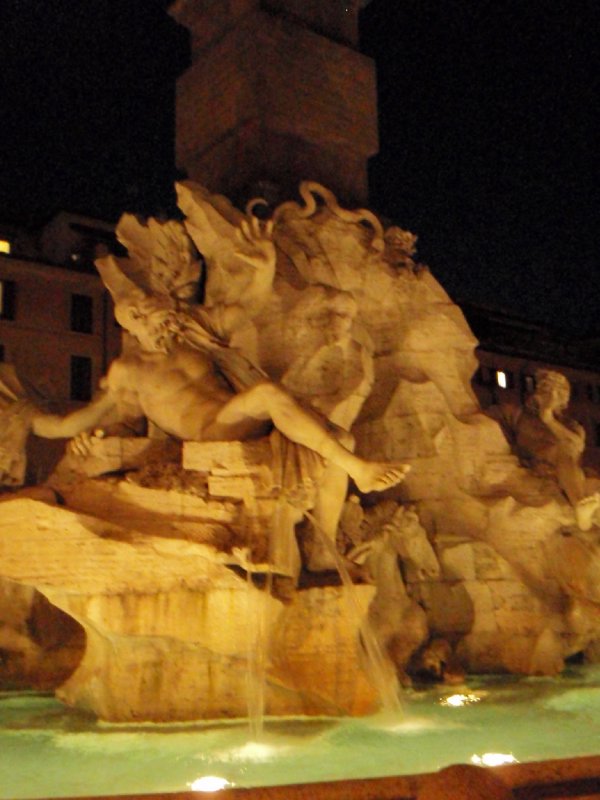 Our stroll home from there took us down Via Mascherone, where we found the mask fountain that the street is named for. 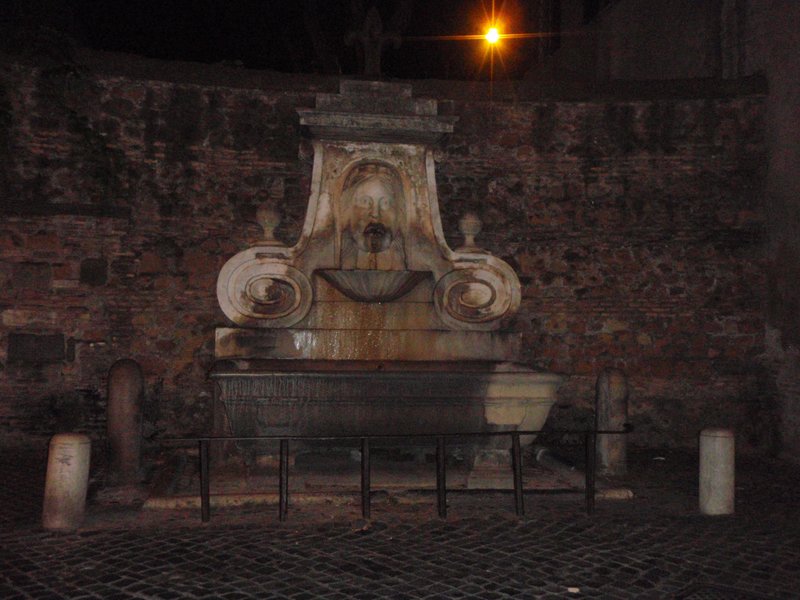 Having had our taste of La Dolce Vita, it's time to head home. We've got plans to travel out of Rome tomorrow, to visit the ruins at Ostia Antica.