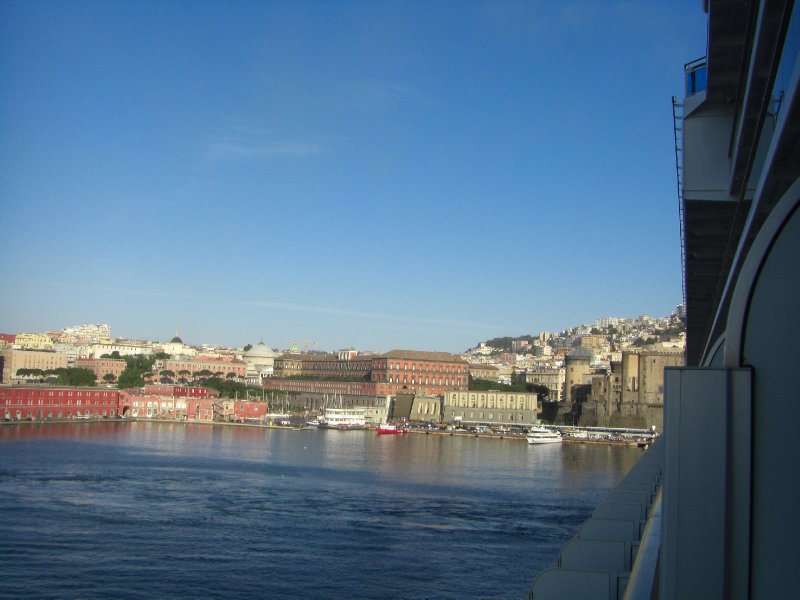 The Port of Naples

It's now Sunday. We originally had ambitious plans for Napoli. I had worked out the timetables of the trains to figure out how we could visit the Naples Archaeological Museum for 2 hours, then hop over to the Capella Sansevero for a quick visit, then take the Circumvesuviana to either Herculaneum or Pompeii for a few hours.

When push comes to shove, as attractive as a trip to Pompeii or Ercolano may be, we've already seen two extensive sets of ruins at Ostia and Ephesus, and the idea of rushing through Pompeii just to say we've been there isn't really appealing to me.

Instead, we decide to pace ourselves and spend time at two places we REALLY want to see, and then see what happens. So, around 8am, we pack up our Pacsafe, make sure our money is secure, take off our jewelry, and stroll out into the Naples sunlight.

At first glance, Naples doesn't seem to be as scary or as threatening as it's made out to be. As we walk into the city, we're unaware of the mugging and death of a tourist that was recently in the news. 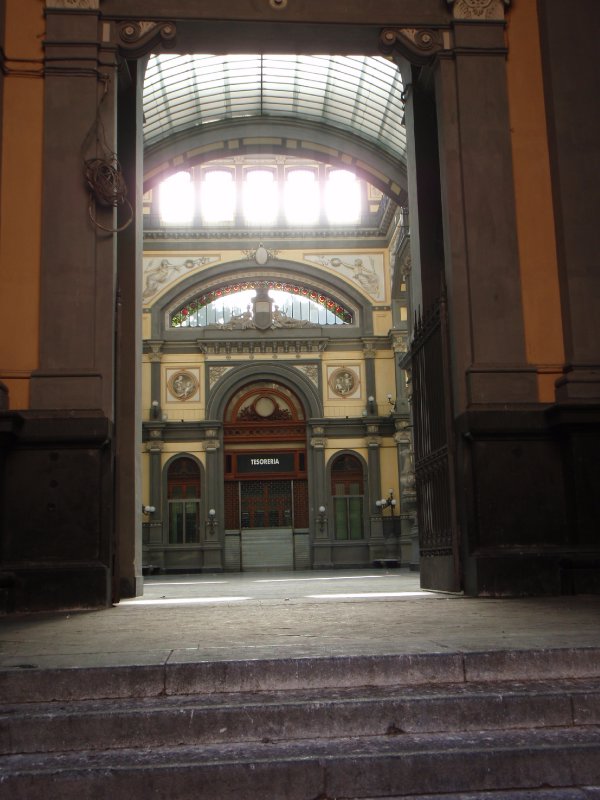 A Bank along Via San Giacomo

Honestly, perhaps it was because it was a Sunday, but Naples wasn't nearly as crowded, chaotic, or threatening as I was prepared for it to be. We exercised a normal amount of caution, but at no time did I feel any more uncomfortable than I would walking on a street in Manhattan. I will admit, however, that crossing streets is a little like playing Frogger, until you get the hang of it.

We stop for some pastries at a little shop on Via Toledo. Mrs. Z decides to indulge in a Nutella Cornetto, a pastry horn filled with Nutella...and "filled" is an understatement. When she bites into it, Nutella bursts out and runs down her arms. It's truly a 5-napkin cornetto!

We arrive at the National Archaeological Museum about 20 minutes before opening time, so we just hang out on the steps for a bit. 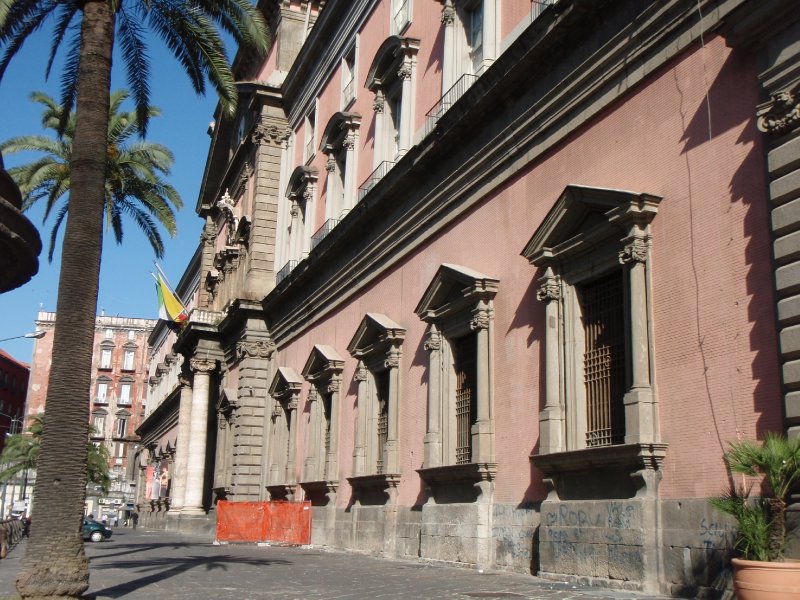 Promptly at 9am the doors swing open, and we step into this wonderful museum. Although it's empty at the moment, as the day progresses it fills with Italian and German tour groups.

Our first stop is the Farnese Collection, a set of statues amassed by the Farnese family; many of them were formerly on display at the Palazzo Farnese, not far from where we were staying in Rome. Here's the massive Farnese Hercules....there's an interesting story about his legs, but you've got to visit the museum to find out what it is! By the way, if you're offended by nude statues, grab yourself a fig leaf. 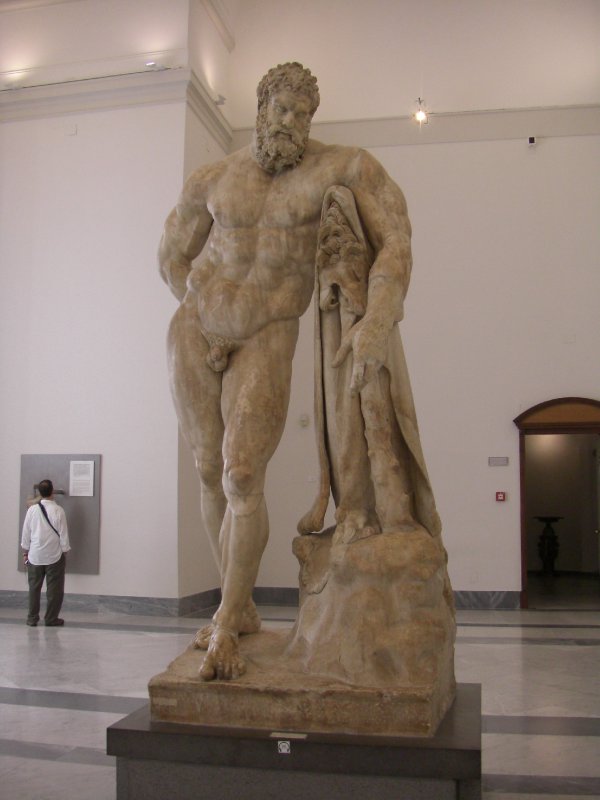 Of course, the big centerpiece of this collection is the Toro Farnese, "The Farnese Bull". It's a depiction of the myth of Dirce, who was tied to a bull to be trampled to death as punishment for irritating Antiope. It's an astounding work. 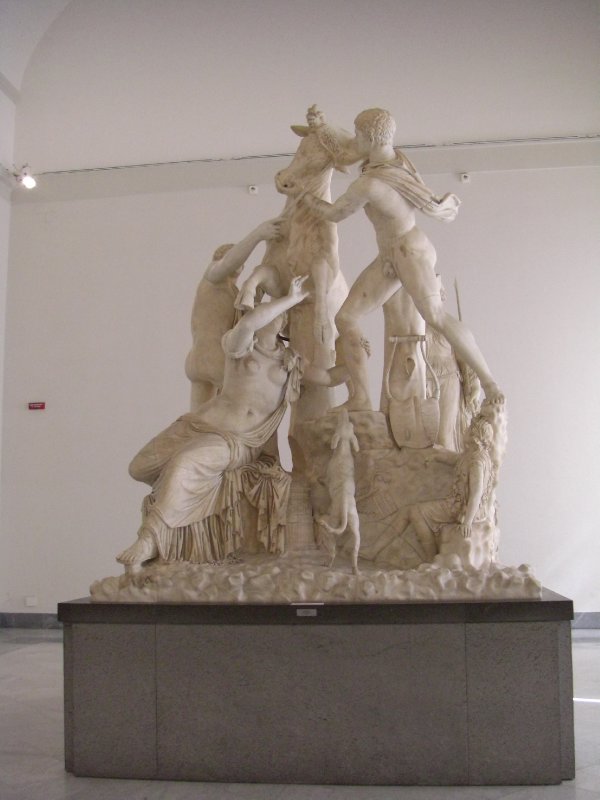 What's even more amazing, as you examine this intricate and immense sculpture, is that it is chiseled out of a single massive block of marble. 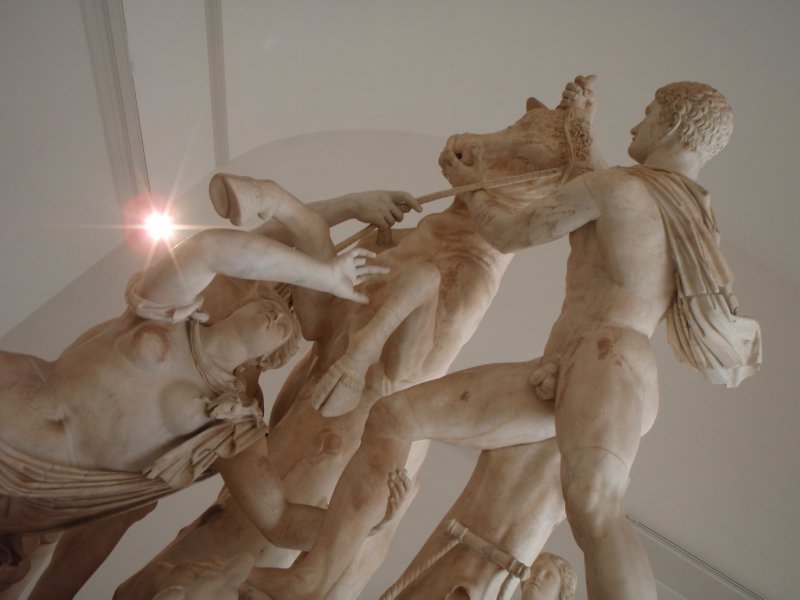 The other big draw of this museum is Pompeii....virtually all of the mosaics, statuary, and other accoutrements from Pompeii have been relocated here, and replaced with reproductions at the site. We get to see some of the most famous Pompeian artworks, including the original Alexander the Great mosaic: 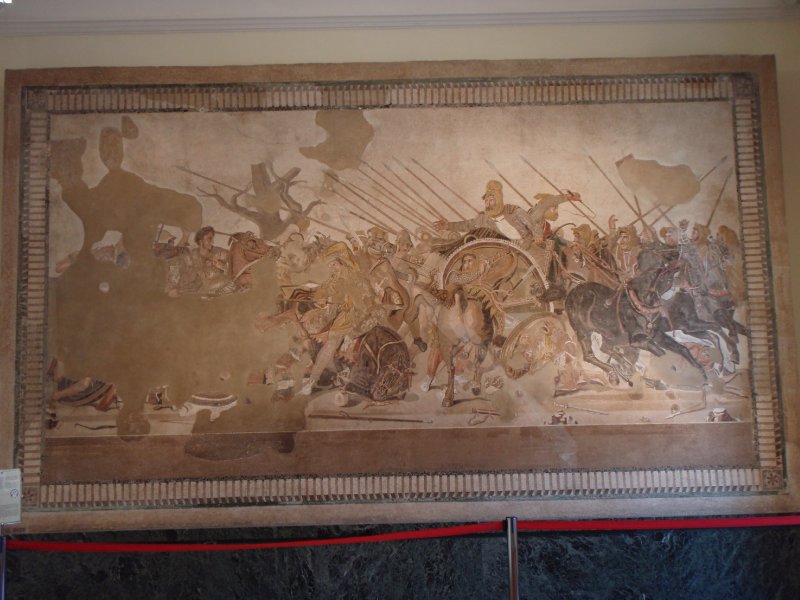 The Alexander the Great Mosaic 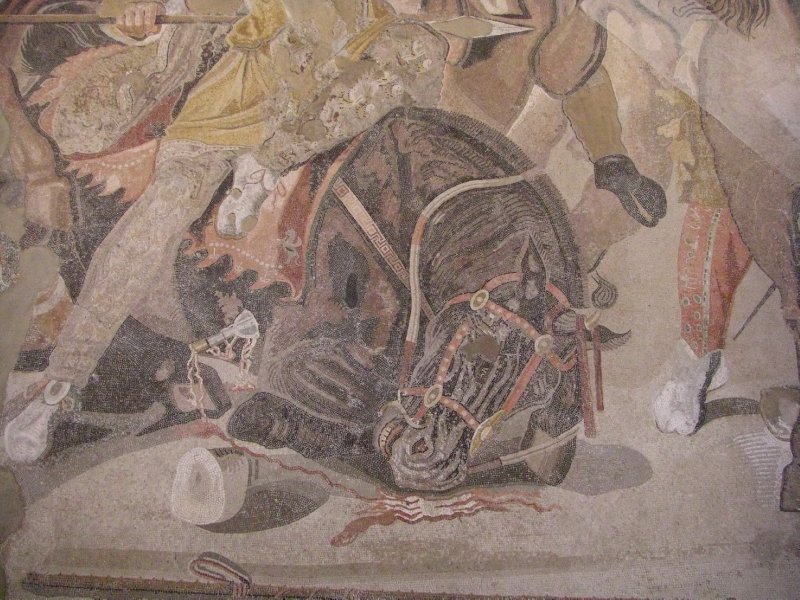 Detail of the Mosaic

....and the Dancing Faun 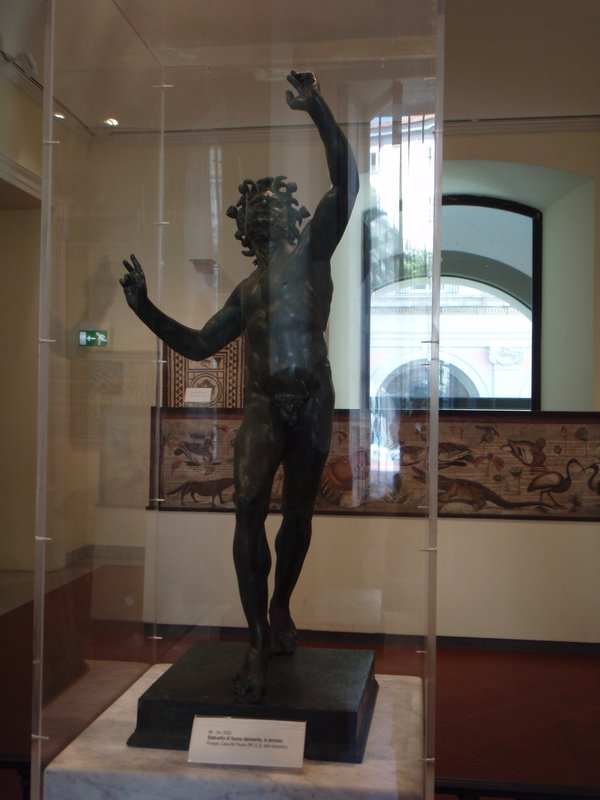 From the museum it's only a few short blocks to the Capella Sansevero. I heard about this place a while ago, and I've wanted to see it in person ever since. It's not especially well-known, yet it contains a lot of surprising sculptures, one of which, in my humble opinion, rivals Michelangelo's Pieta.

The Capella was the family chapel of the Sansevero clan, and it is wonderful and creepy all at the same time. No photos are allowed in the Capella at all, so you'll just need to click on this link to the museum's website to see what I'm talking about.

The centerpiece here is Sammartino's "Veiled Christ". Sammartino learned the art of creating a "veiled statue" from his mentor Corradini, and in this case, the student exceeds the master for sure. It's an exquisitely beautiful piece, rivaled only by the incredible complexity of Queirolo's "Disillusion" with an intricate fisherman's net carved out of stone. Seriously, this is the most amazing little place you've never heard of.

After the Capella, we decide to definitely skip the trip to Pompeii, and stroll down Spaccanapoli instead. Most of the stores are closed, but the streets are still crowded. 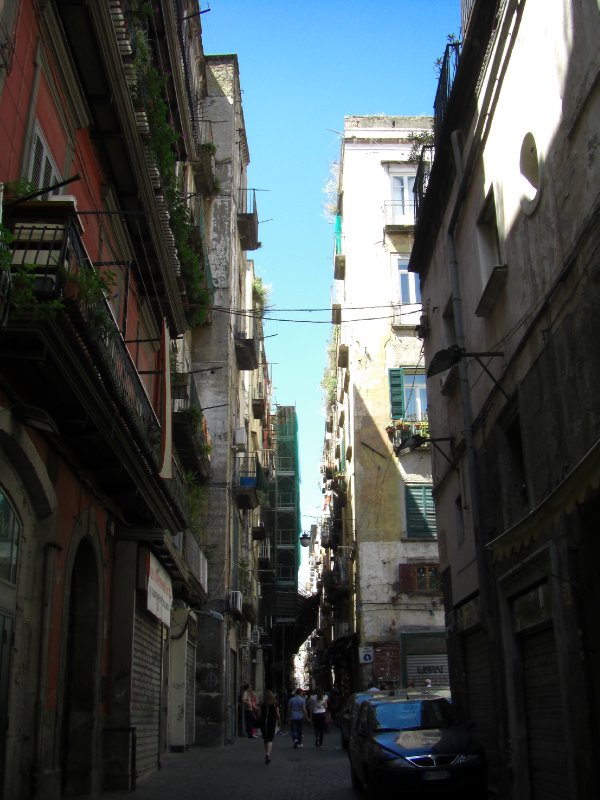 We pull off onto a side street, and take a few photos of the real Naples. We found this "street of stairs": 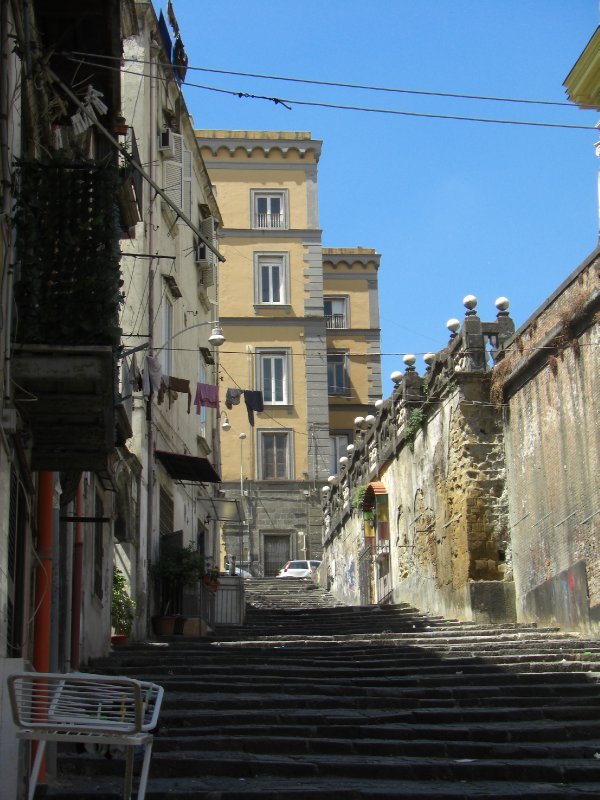 A side street of stairs 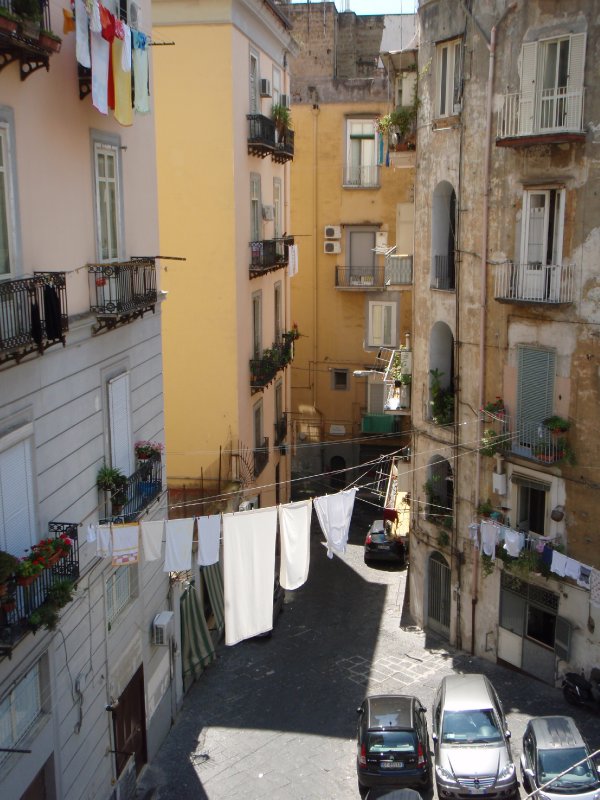 As we stroll around the city, we start to realize what makes it so different from Rome....there are NO green areas, no open parks, the few Piazzas we see are crowded and urban. The only open space is UP. Yet, there are still surprising and charming things if you take the time to look for them. 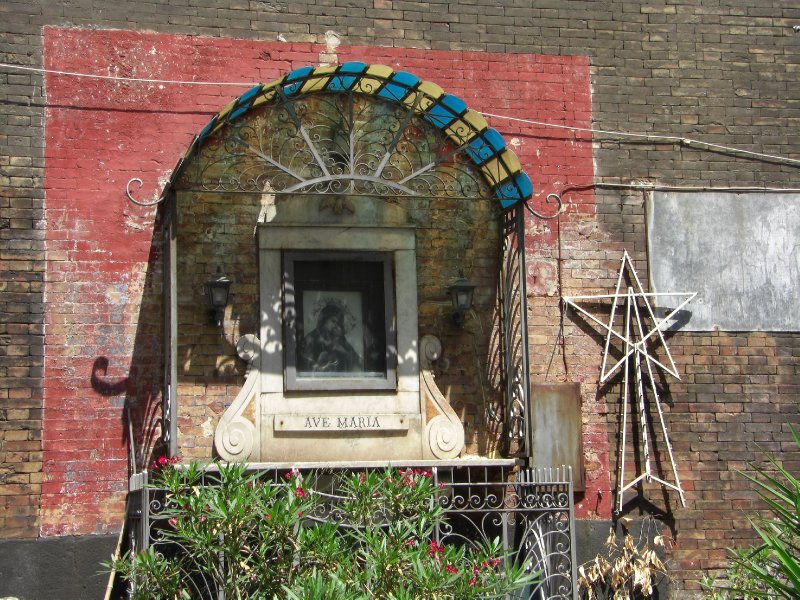 We wind up or visit to Naples with some Neapolitan pizza. The famous L'Antica Pizzeria Da Michele is closed, so we sit down at Borgo Antico near the port and enjoy some Pizza Bufalina and a vastly overpriced bottle of regional wine. We overpay for it willingly, and the owner of the Pizzeria seems to know that we're in on the joke. 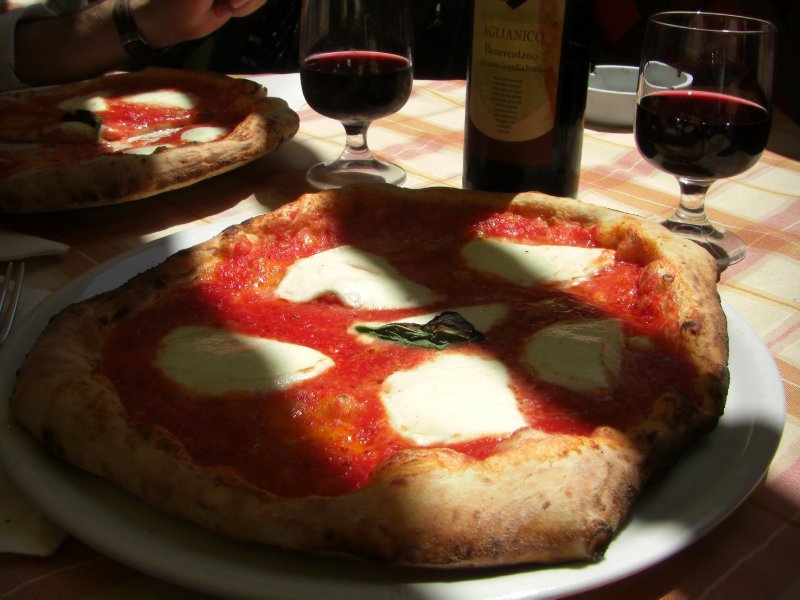 Satisfied and full of wine, we weave our way back to Molo Beverello and the Star Princess. 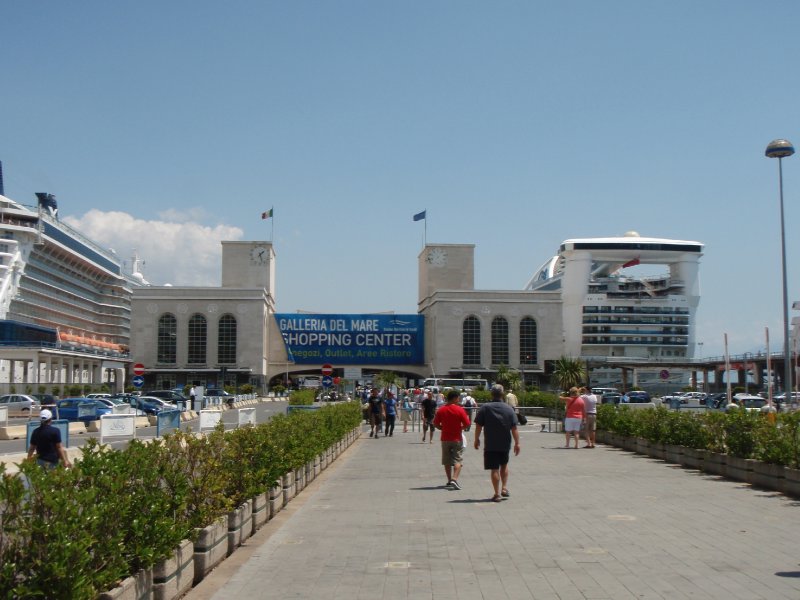 Tonight, we sail past the Island of Ischia, and head for our departure in Civitavecchia. The Celtic Tenors are giving a second, unique performance tonight, and this time we're there to enjoy it. In the morning, our adventure ends with a Princess transfer to the airport and an uneventful return flight to Philadelphia. Arrivederci, Italia! 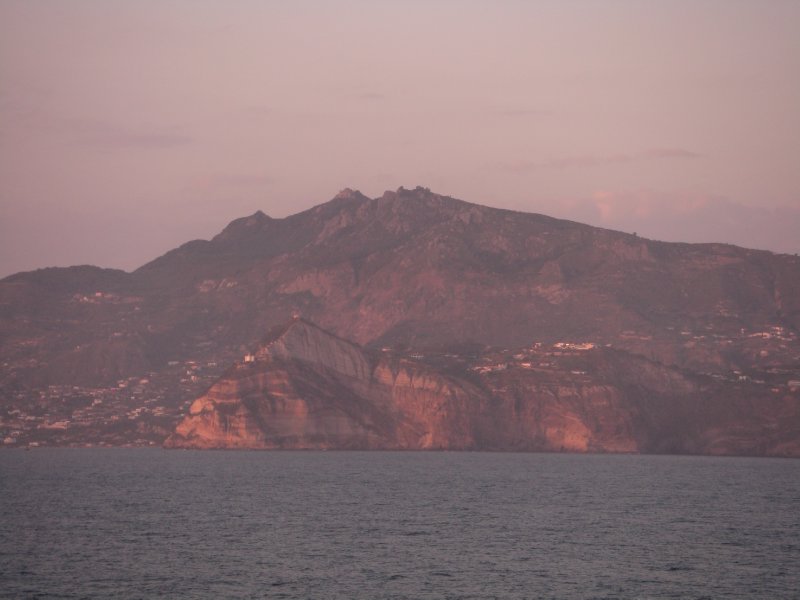 Passing Ischia in the sunset