Friday, I wake at 5:30 to watch our sail into Piraeus. The harbor is the busiest we've seen so far, with ferries criss-crossing every few minutes. Lighting crashes continuously just off shore. We've been preceded into port by Serenade of the Seas and Fred Olsen's Black Watch. This means we wind up berthing at Terminal B instead of the more convenient Terminal A. In addition, a dock worker strike has halted the normal shuttle bus service between the two terminals. Taxi drivers have arrived at the pier, but rather than the €15 they are supposed to charge for a trip to the Acropolis, they are charging €50 one way! 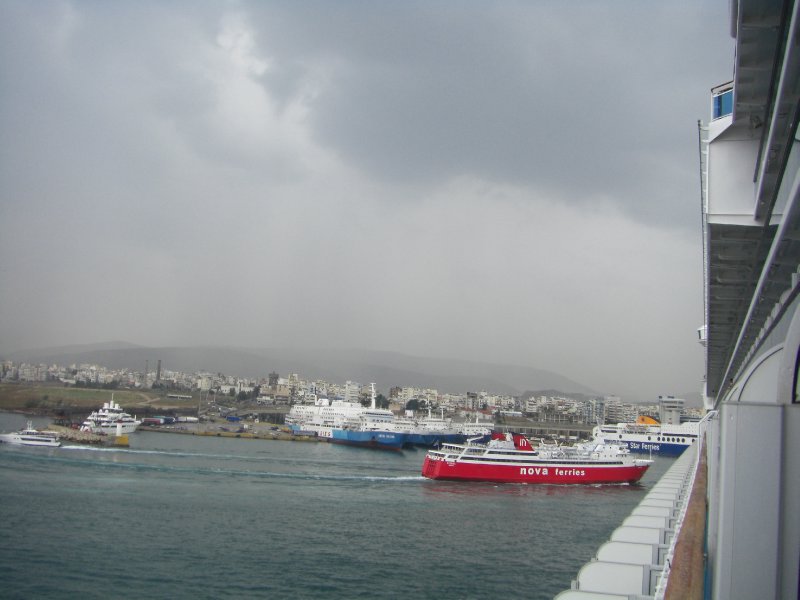 Terminal B at Piraeus Harbor

We look at the port map, listen to the recommendations that it is too far to walk to the metro, and decide to do it anyway. It takes us 15 minutes to get to Terminal A, then another 30 minutes to get to the metro from there, but the walk is safe and uneventful, although navigating the ramps and merges for the terminals and gates can be a little hazardous. We buy a pair of €4 all day tickets, validate them, and hop on the metro to Thissio station. From there, we make a long walk up the hill to the entrance to the Acropolis. 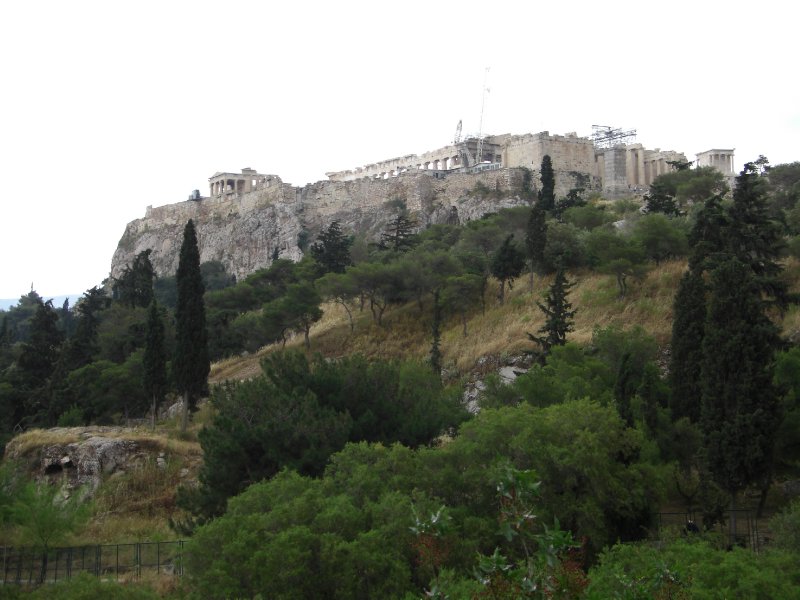 Once we obtain our €12 tickets, it's a steep climb up to the level of the Acropolis plateau. The path is a mix of slippery rough cut marble and loose gravel, and is clogged with plodding cruise shippers, tourists, and hundreds and hundreds of schoolchildren on outings. 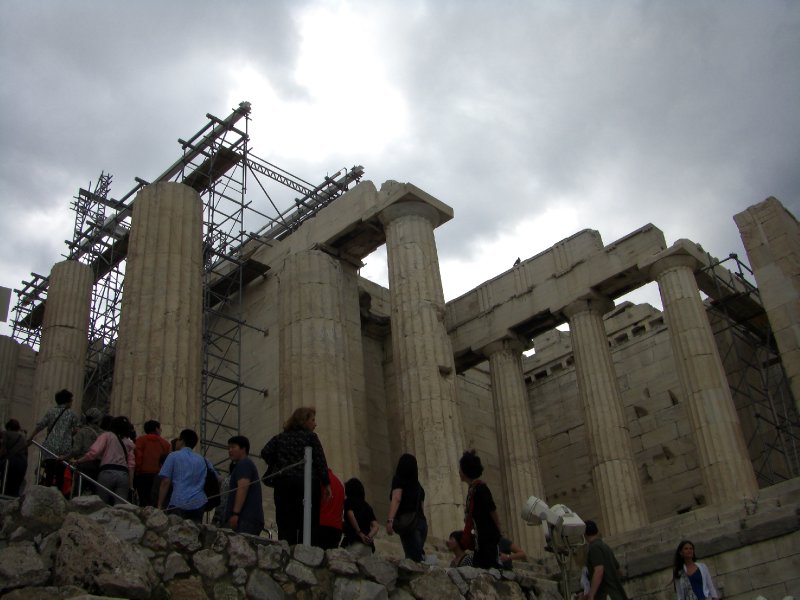 Climbing up to the Acropolis 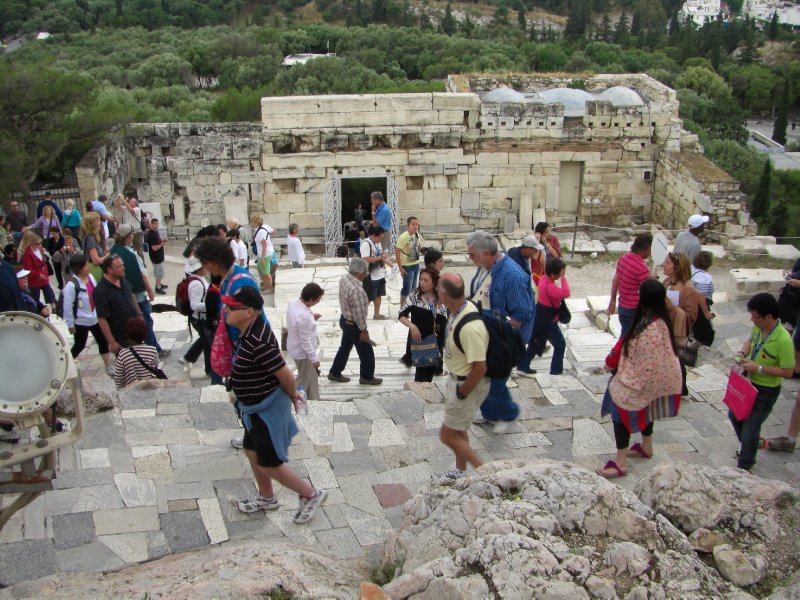 The climb to the Acropolis

On the plateau, people mill about, pushing and shoving to get the best vantage points. Nevertheless, the site is amazing to see. Restoration work on the Parthenon continues, and a large crane is in place, but much of the scaffolding has been removed. In fact, restoration work is evident throughout the Acropolis. The original marble quarries on Mount Lycabettus have been reopened, and that same marble is being used to reconstruct damaged portions of the site. It is expected eventually age and blend in with the original structures. 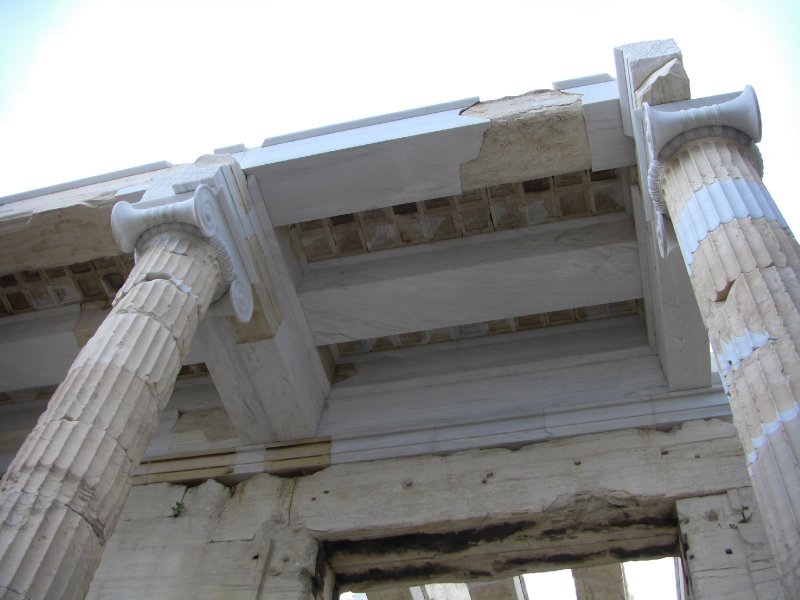 The white stone is fresh cut from the original quarry

Much of the exposed statuary has been removed and replaced with replicas. The originals have been moved to the New Acropolis Museum for restoration and display in a controlled environment. 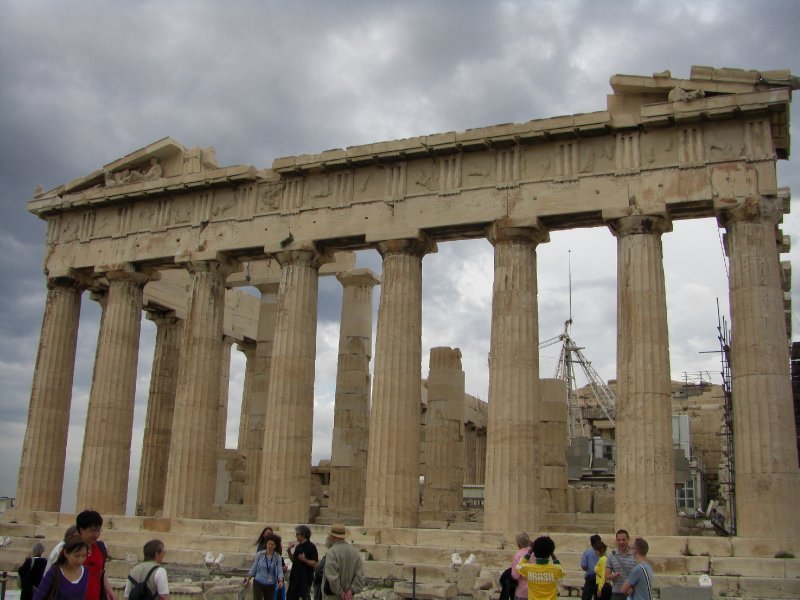 The East facade of the Parthenon

Even the famous Caryatids are replicas. We do get to see some of the recovered originals undergoing conservation in the museum. 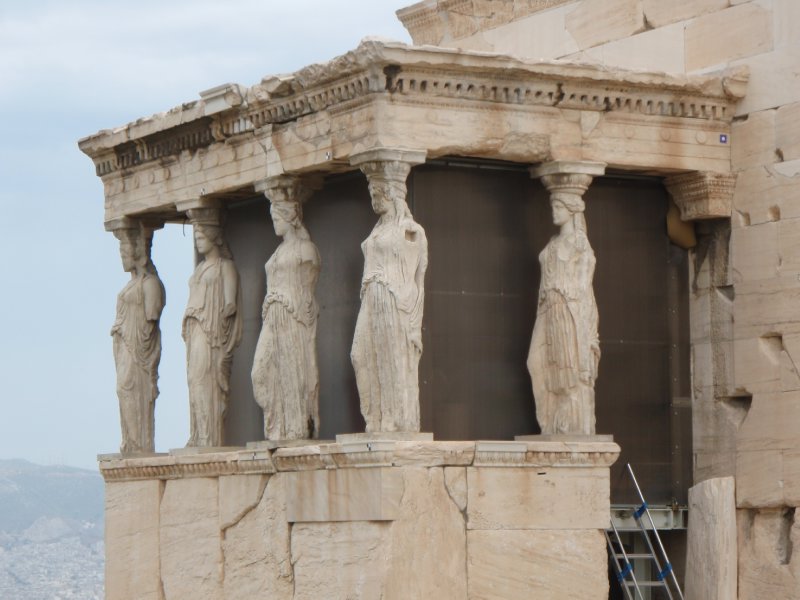 Porch of the Caryatids, south side of the Erechthion

We follow the very thorough Rick Steves audio tour, which takes about two hours. The view from this promontory in the middle of a dense urban city is amazing. 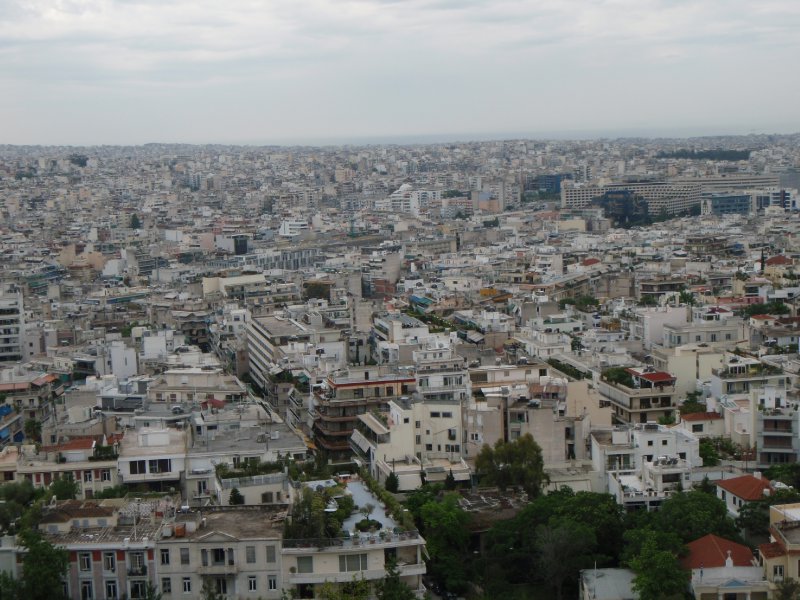 The City of Athens, from the Acropolis 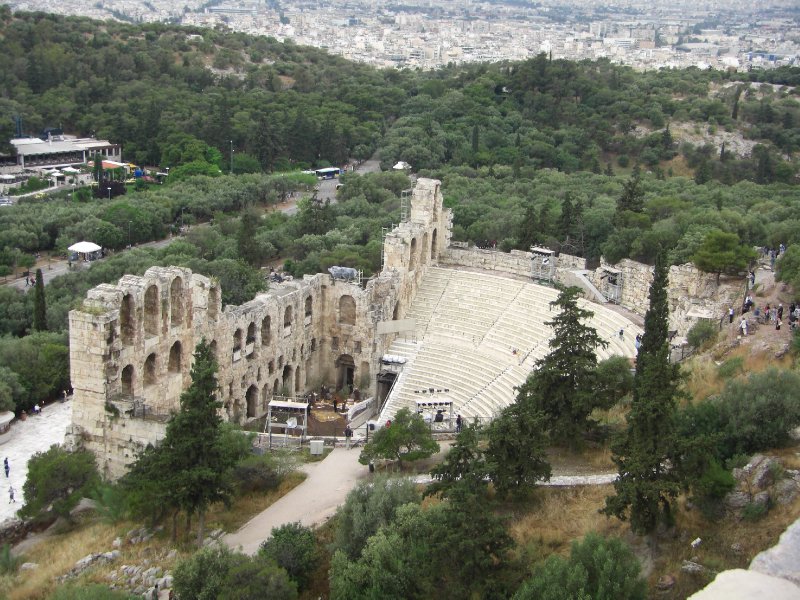 We descend and find our way to the New Acropolis Museum.

The Museum is a beauty, displaying many independent pieces from the Acropolis in a contextual manner. The displays are clean and fresh and laid out in a logical way. Even so, Mrs. Z is getting hot, tired, hungry, and frustrated with the bad behavior of the tourists that keep pushing their way in front of her at every display. There's so much space around the displays at this museum that there's just no excuse for that kind of behavior. We make it through the third level, which is a virtual reconstruction of the frieze, metalons, and pediments of the Parthenon, and is beautifully executed

We decide to exit the museum and try to cool down. We grab a couple of Cokes and start walking toward the Plaka. Using a recommendation from Rick Steves, we seek out Sholarhio Ouzeri Kouklis on Tripodon Street. This is an interesting place. They charge €14 per head for 5 plates of food. They bring around a large tray of dishes from which to choose. We pick fried calamari, fried eggplant, fried cheese pies, pork stew, and spinach in olive oil. The food is served with a crusty loaf of bread and a large bottle of water, and the meal concludes with what I think was halva, a farina and honey jellied dessert. Greasy but satisfied, we depart and decide to find the entrance to the ancient Agora. Our search takes us down to Monastiraki Square, where we see the diminutive Church of the Virgin, sunken below street level. 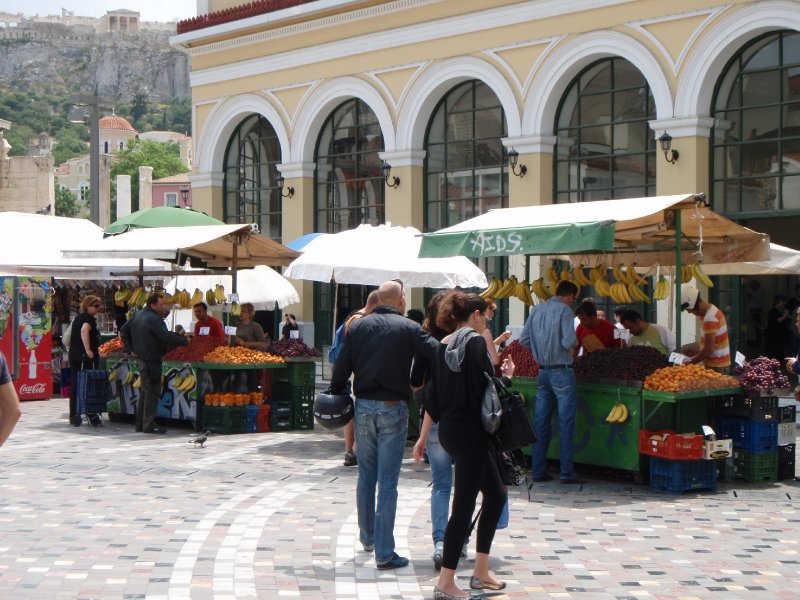 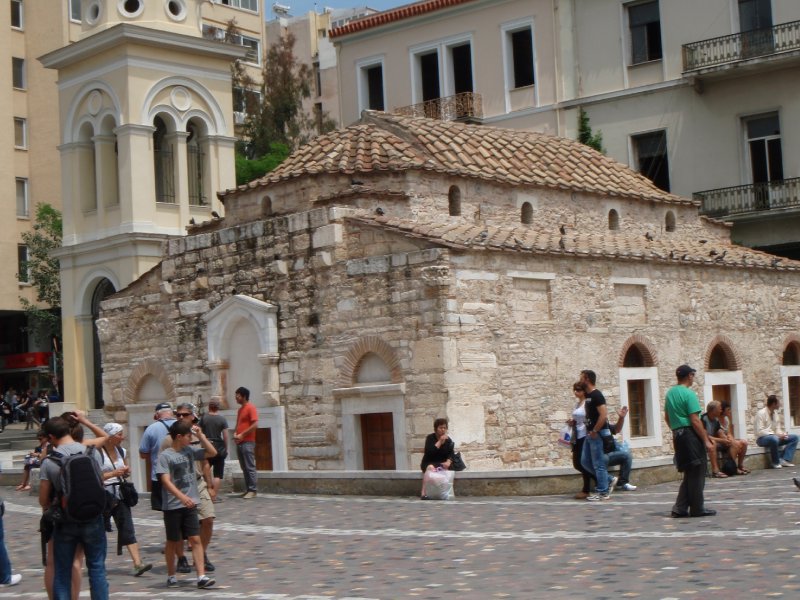 Church of the Virgin, Monastiraki Square

We detour down flea market alley, and I stumble across a small music store that features American guitars and Greek Bouzoukis. The bouzoukis are very reasonably priced, I think, at €230 pre-haggle. They feature beautiful inlay work, and I'm tempted but refrain. We can't seem to find the entrance to the Agora, we're hot, damp, and tired, and we find ourselves right in front of the Thissio station at 2:30, so we decide to call it a day. We have an uneventful metro ride back to Piraeus, but the walk back to Terminal B seems awfully long.

Just as we enter the port, the threatening skies start to let loose. A storm is whipping up, and Star Princess is being pushed away from her berth by the wind. We have to wait at the terminal while mooring lines are snugged up. 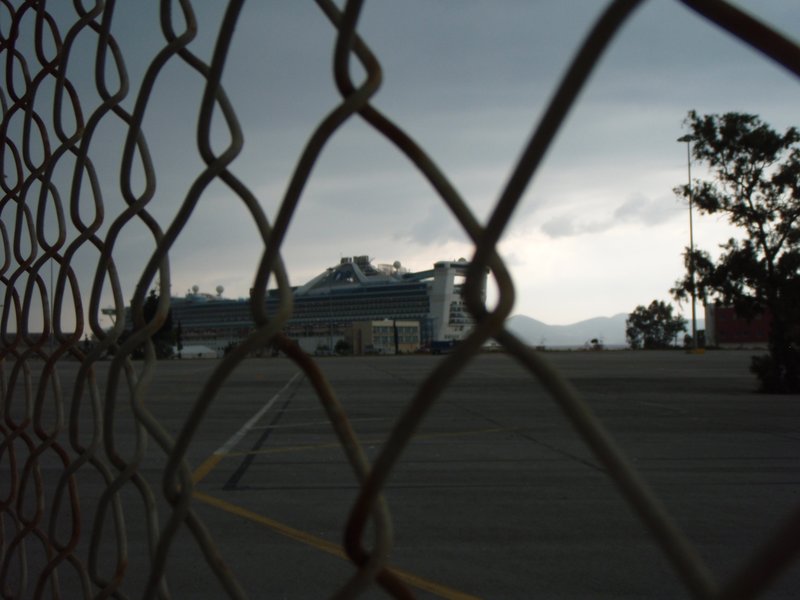 Almost there! Trying to beat the rain!

Finally, we're back on board. We enjoy a steamy cappuccino, followed by a steamier session in the thermal suite. Then, it's off to Mediterranean dinner in the Capri dining room. Tonight, I have shrimp cocktail, Shepard salad, and pork chops with fig demi-glace. Mrs. Z has fruit, a fettuccine starter, and the same pork chop. This is followed by some really nice pistachio ice cream and a sampling of baklava. We're finding that the service in the Capri dining room is much better than we've seen in the Portofino.

Tonight was supposed to be a Caribbean deck party (in the Mediterranean? Really?) and buffet but the inclement weather pushes it indoors to the Vista Lounge. We stop by, but it seems really silly. what. A band, plastic leis, no food. The ship, already lightly populated, is starting to seem positively deserted. We catch a small part of the first Celtic Tenors show in the theater before heading back to the room to crash. All of this touring is starting to wear us down.

Posted by Zukini 20:42 Archived in Greece