It's Thursday, May 26th, and the Star Princess is making a noon stop in Kusadasi, the jumping-off point for the ruins of ancient Ephesus. 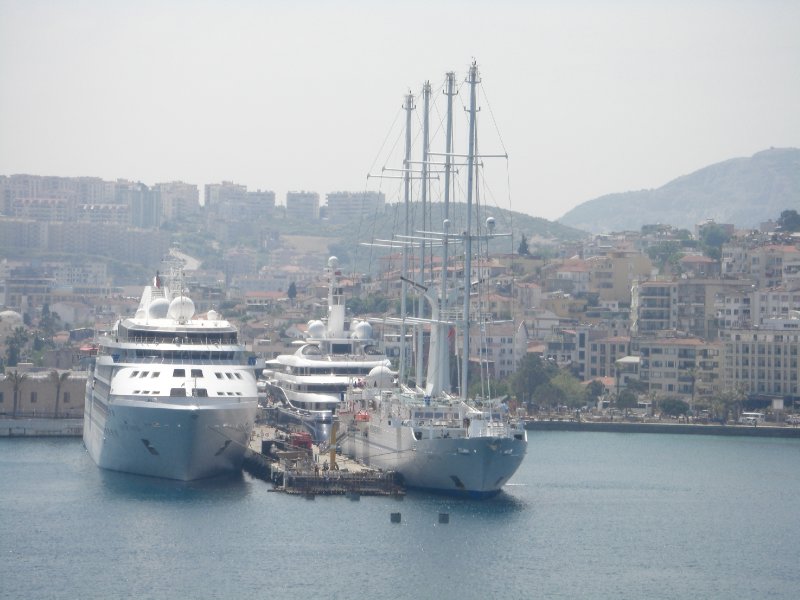 The port of Kusadasi

We have a relaxing morning, and meet our tour guide from Ephesus Deluxe at the cruise terminal. Her name is Gülçin, which means "person gathering roses", but she tells us to call her Rose. I'll do that here as well, since it's a pain in the neck to type those Turkish characters. We again have a van setup for touring, and off we go to the ruins at Ephesus.

Rose is a little soft spoken, so we have a hard time following her commentary as we travel. We pass some of the beach resorts, and pass through Rose's hometown of Selçuk. It takes about 25 minutes to get to Ephesus, and it is beastly hot. When we arrive, souvenir vendors are trying to sell guidebooks at ridiculous prices (30 Euros but they'll bargain down to 10). We decline.

The site is again astounding. It is another complete city that was abandoned due to malaria and a change in the course of the river, very much like Ostia Antica. Even the layout of the city is similar, with a government district, a commercial district, and a necropolis. Although the city dates back to the 2nd century BC, most of the ruins here are from the later Roman occupation. 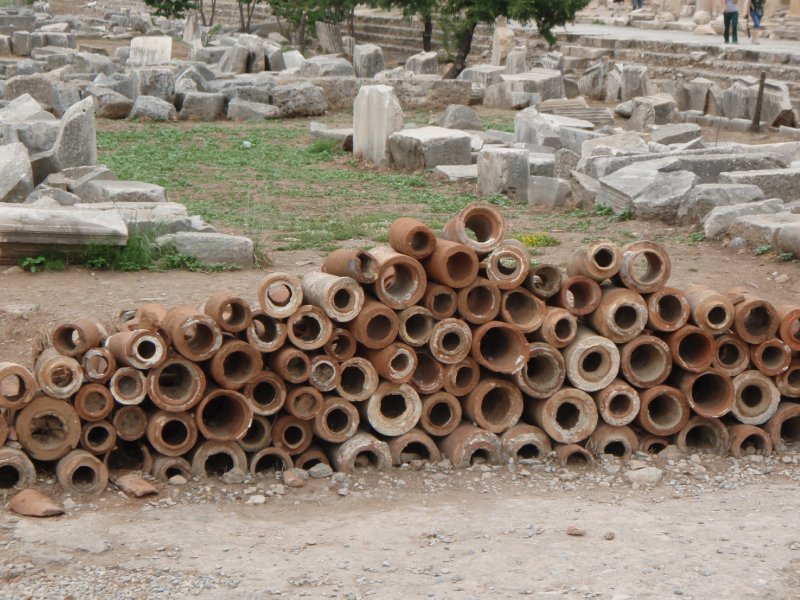 Clay pipes, still waiting for the plumber to show up.

As we are lead around, we start to get a real sense of how the puzzle pieces of history all fit together. The selection of cities on this cruise really emphasizes the cross pollination that has occurred in this region. 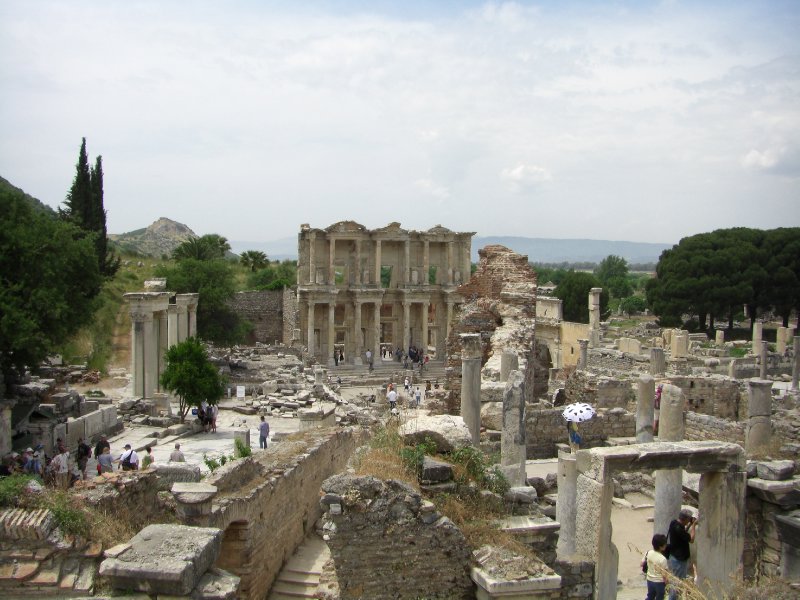 Overlooking the center of Ephesus

Of course, Ephesus has a lot of significance to Christians. Nearby is the "House of the Virgin Mary", believed by many to be the home where Mary was taken to live by St. John. The ruins at Ephesus also contain what is believed to be the tomb of St. Luke. 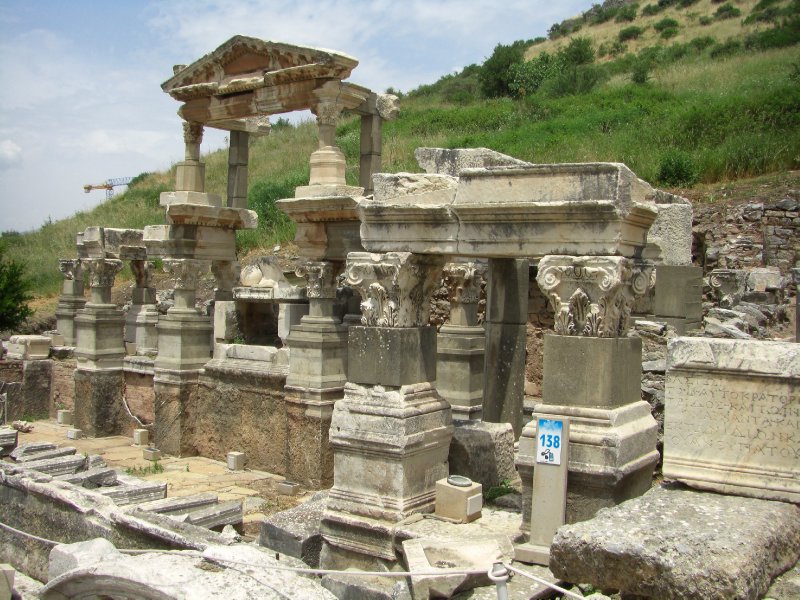 The scope of the city is quite large. It contains both an Odeon and the much larger Great Theater, so you can imagine the throngs of citizens that once filled them. 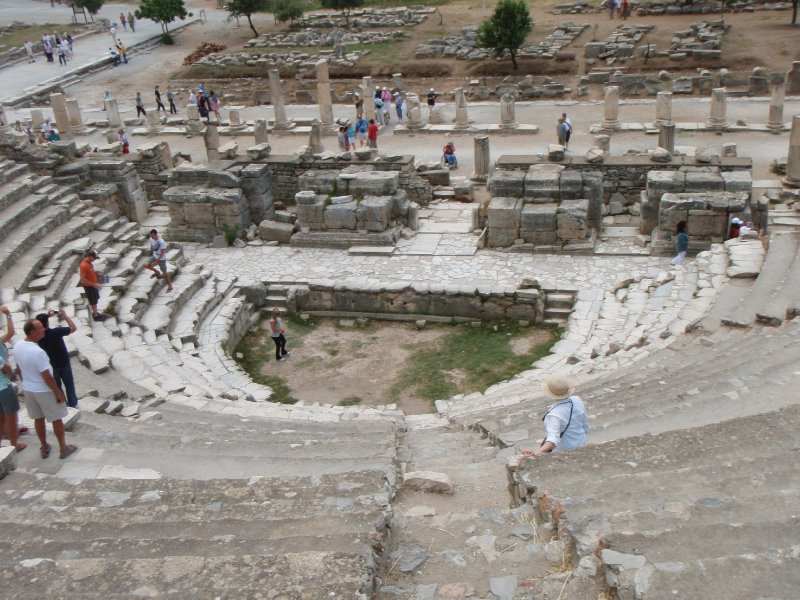 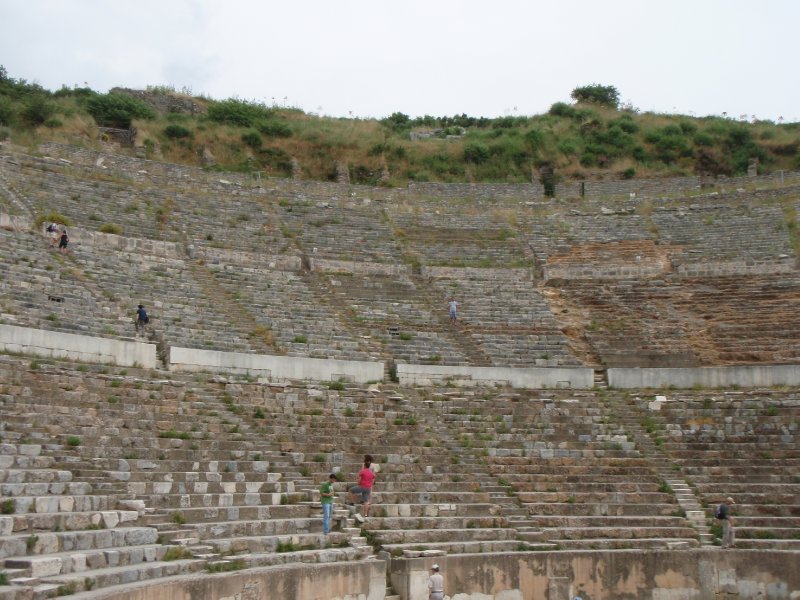 The ruins are fascinating, but the heat is punishing. Rose tells us about each area we visit, then runs off to a shady spot while we explore. A couple of standouts include this sculpture of Athena Nike. Look carefully at the folds of her gown on the left side...that was the inspiration for the trademarked Nike "swoosh". 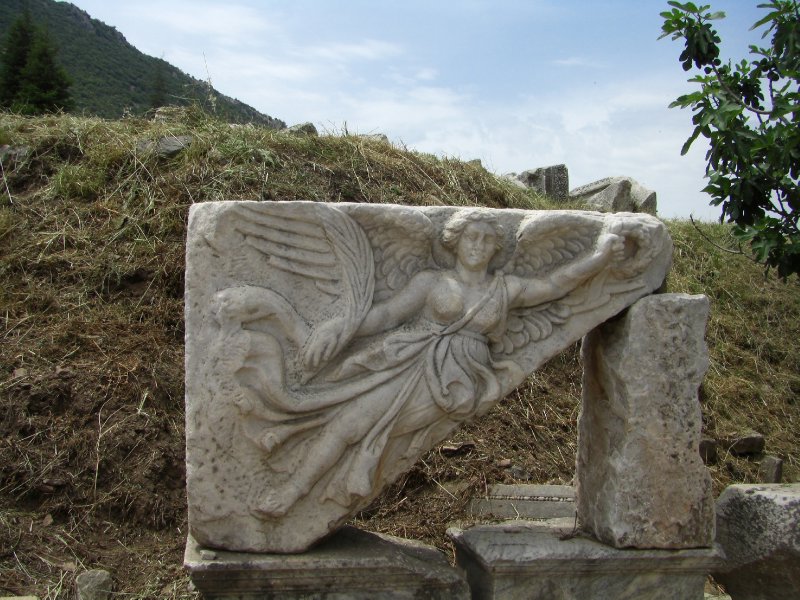 At the Temple of Hadrian, the now familiar Medusa stands guard. 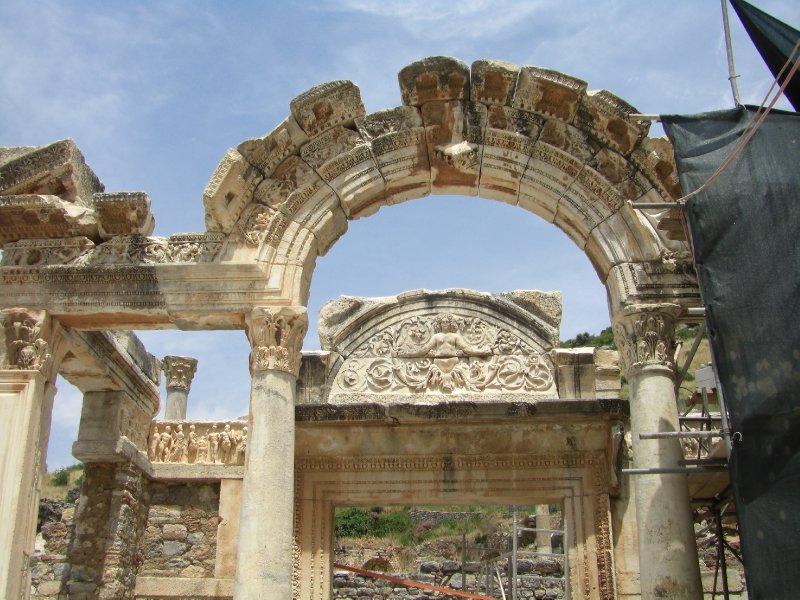 Another popular spot is the men's latrine. It was engineered with running water under the seats, to carry waste away, and running water in the trough in front of the seats, for washing...the sponge. The sponge, on the stick. That you would share. 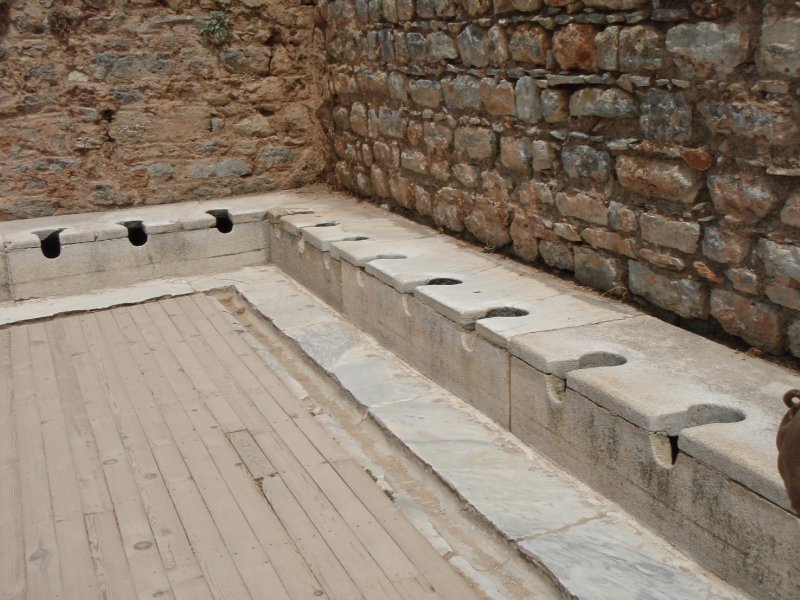 The big signature structure here at Ephesus is the iconic Library of Celsius. This is largely restored and reconstructed, but still is an imposing facade. 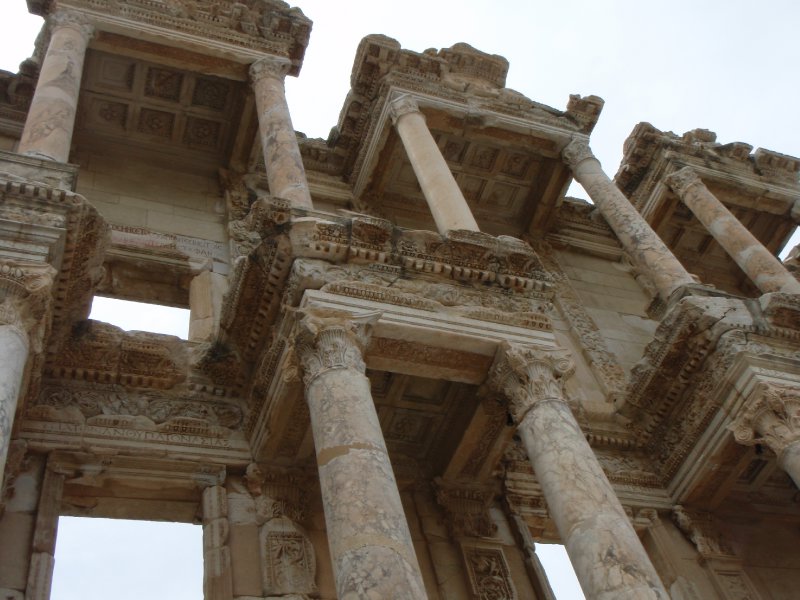 Just beyond, in a covered structure, are the Terrace Houses, which require a separate admission fee. These are essentially Roman insulae transplanted to the hills of Ephesus, and they are in an astounding state of preservation, with many of the frescoes and mosaics still intact. 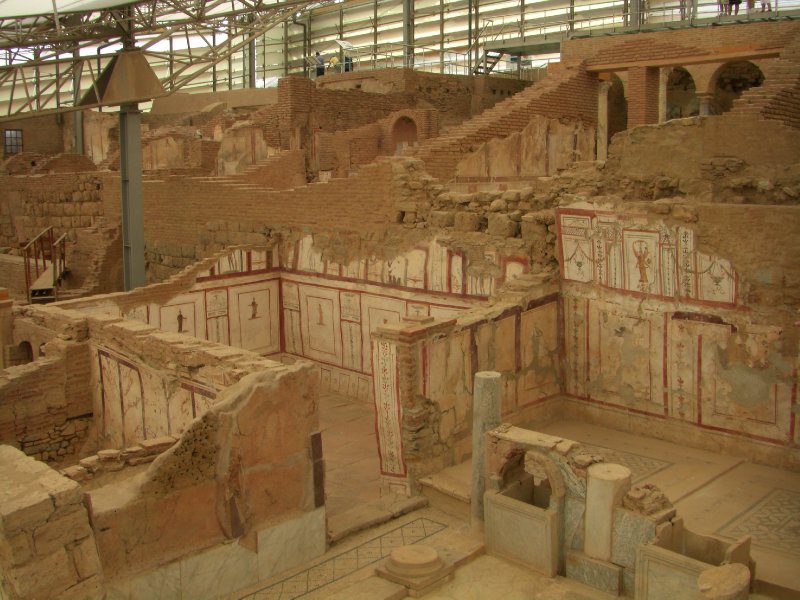 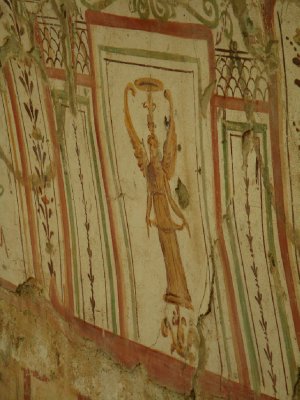 The painted walls are still intact

Our last stop is a short visit to the remains of the Temple of Artemis, once one of the 7 ancient wonders. Now, it is a lone pillar in a neglected field of rubble and grass. 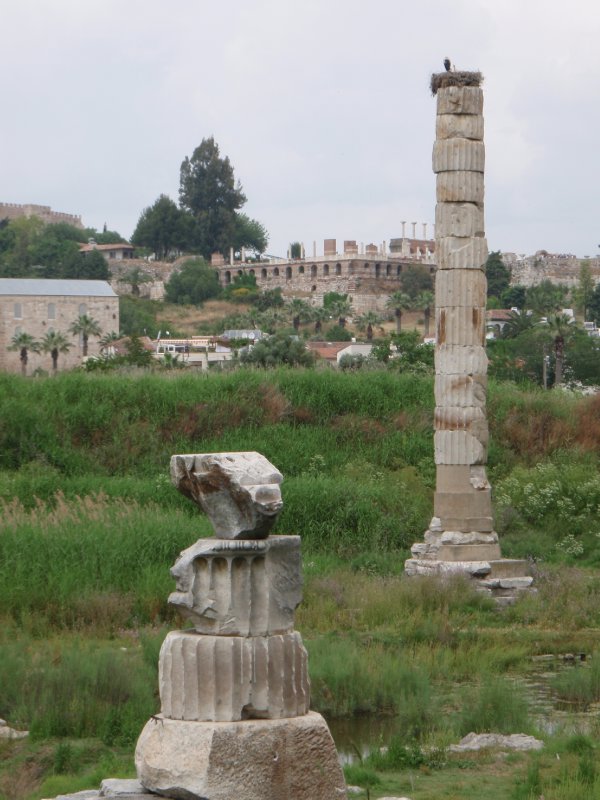 What's left of the Temple of Artemis

At the Temple, we're approached by two rival booksellers, both trying to sell us the same book. Fortunately, a tour bus pulled up at that moment, so we were able to escape. Rose asks us if we want to shop for leather work or carpets. We decline, and she sits in the front seat and ignores us for the ride back to port. I can't say I was crazy about her services, especially contrasted with Fatih the day before.

We visit the buffet for the first time since our illness tonight. It's a very early dinner, before they even really changed over from lunch. We then head up to the Lotus Pool, which is deserted.

Tonight's entertainment choices are Motor City in the Vista Lounge, "The Black Swan" in the Princess Theater, and "Toy Story 3" at MUTS.

Overnight, we'll wind our way across the Aegean for our stop in Piraeus, the port for Athens.