Our next stop is the Aya Sofia (or Hagia Sophia). 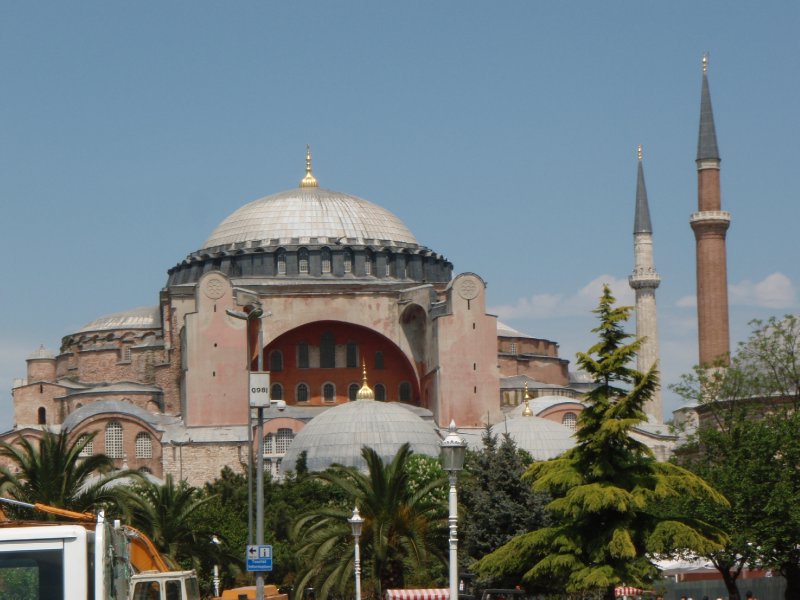 This is another show stopper, and we tour both the ground floor and the upper gallery. The mass of the structure is incredible to behold. Rather than the soaring spaces of more modern structures, you can see and feel the brawn that holds up the enormous dome. The dome itself, although not as tall as the one at St. Peter's, is actually even bigger in diameter. It's hard to get a sense of scale from photos, but the interior is vast. It must have been a most awe inspiring place when it was built. 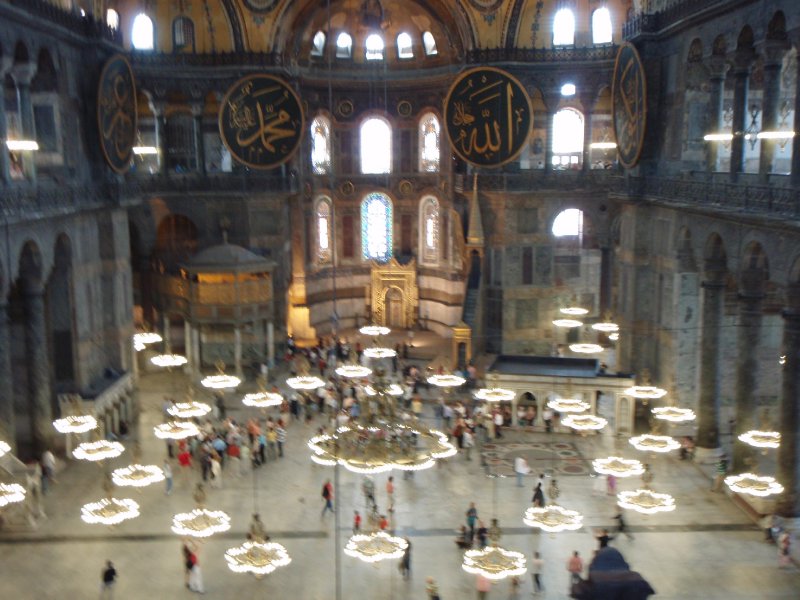 Inside the Hagia Sophia

On the second floor, you gain a real sense of the enormous stresses the structure is under, viewing the warped floors, vaults, and columns. 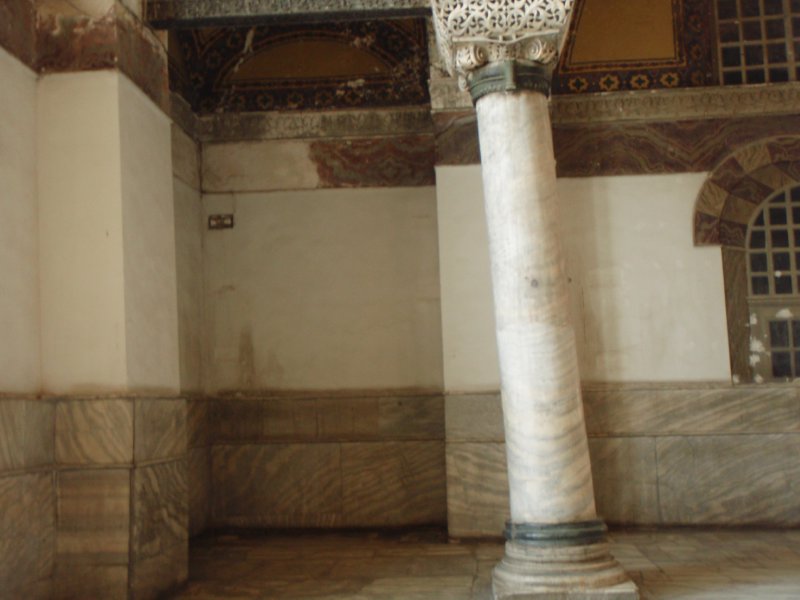 Twisted Columns on the upper level of the Hagia Sophia

The other major draw here is the mosaic work, on such an enormous scale and so finely crafted that it appears to be paint at first, the ceiling and walls were once covered by semi precious stones in glittering mosaics that were plastered over when the space was converted to a mosque. Now, some of the mosaics have been restored. 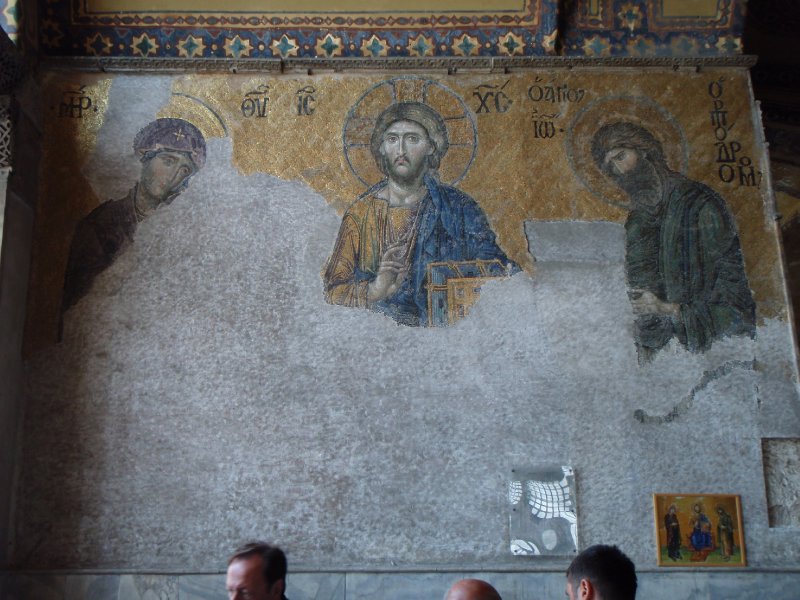 Uncovered mosaics in the Hagia Sophia 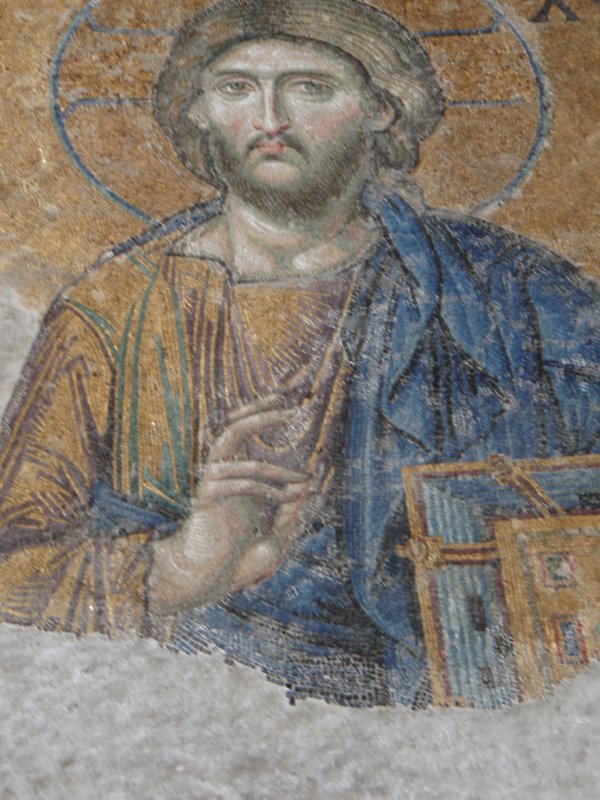 Detail of the precious mosaics

We also viewed the huge bronze doors, appropriated from southern Turkey, that turned out to be too big to fit in their intended doorway, and the lovely book-matched marble panels that line many of the walls. 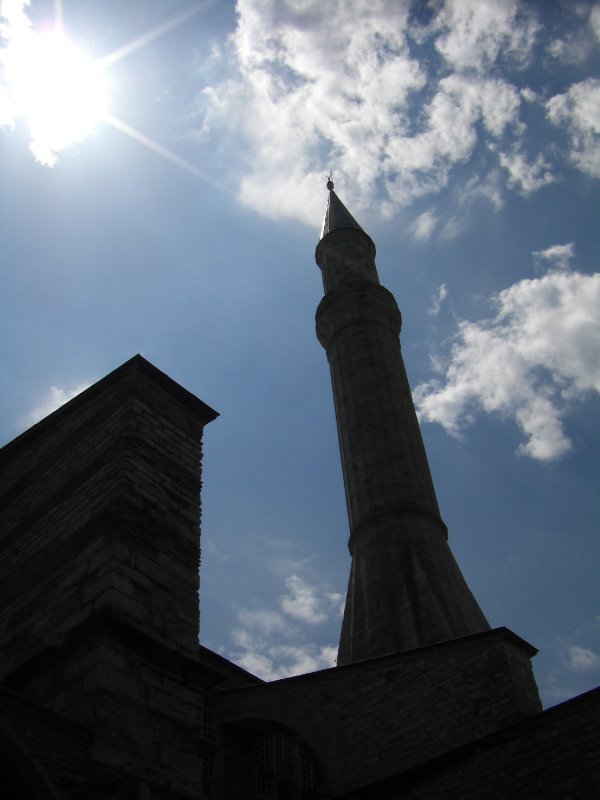 A minaret, silhouetted against the blue sky

Leaving the Aya Sofia, we view the Hippodrome, which includes the top two thirds of an obelisk relocated here from Luxor by the emperor Theodotus. 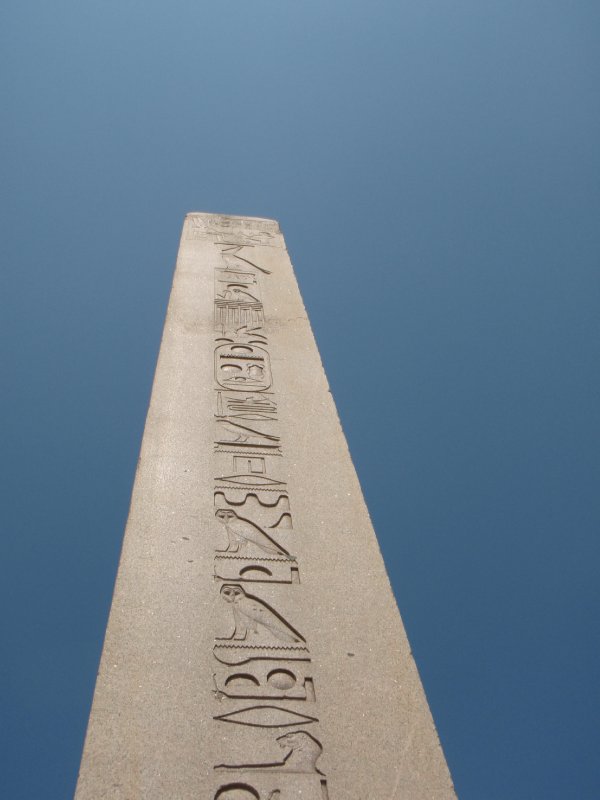 The Obelisk at the Hippodrome

Now, it's down to the cools spaces of the Basilica Cistern. Once a major water supply for the city, filled to the top of the vaults with fresh water, it's now a moodily lit underground forest of columns on a shimmering lake. It's both beautiful and atmospheric, and is often used as a venue for musical concerts and weddings. 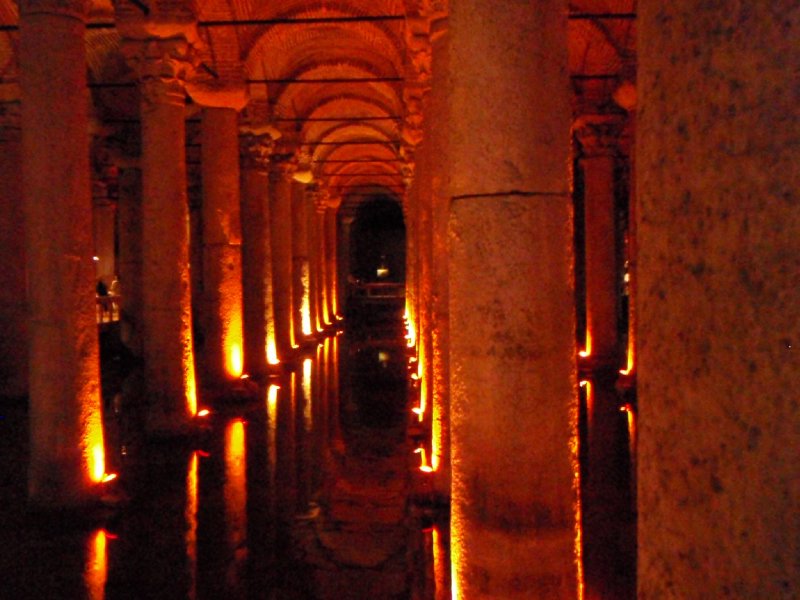 We walk to the furthest reaches to view the Medusa heads, propping up ancient columns. These Roman Medusas were wedged under columns at the very rear edge of the cistern, facing the wall and placed upside down and sideways to nullify any bad luck associated with using them as building material. 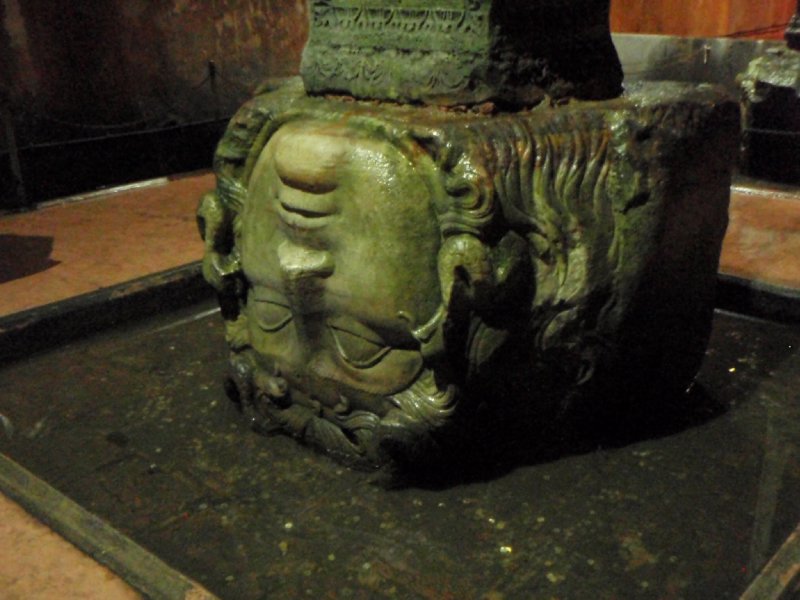 A Medusa Head used as a foundation in the Basilica Cistern

Lunchtime brings us to the Pudding House. It's recommend by Fatih, and he laughingly admits that he gets to eat there for free, as long as he brings in customers. We don't mind, and I enjoy a meat-stuffed aubergine, eggplant stuffed with a spiced meat and topped with mashed potato. Mrs. Z decides to eat a bit, and enjoys some kofte, a spiced Turkish flattened meatball. We finish off lunch with Turkish coffee, thick and full of grounds, and apple tea. Restrooms are upstairs, clean, and monitored by an attendant handing out hand towels, so be prepared with a small tip.

We backtrack toward the Mosque of Sultan Ahmed, better known as the "Blue Mosque" because of the thousands of blue Iznik tiles covering the walls. We pass through the refreshing spray of a park fountain on on our way there.

Enjoying the mist from the fountain

We've come prepared with bags for our shoes and a scarf for Mrs. Z. Fatih tells us she doesn't need to cover her head, as she's a tourist, but she insists. 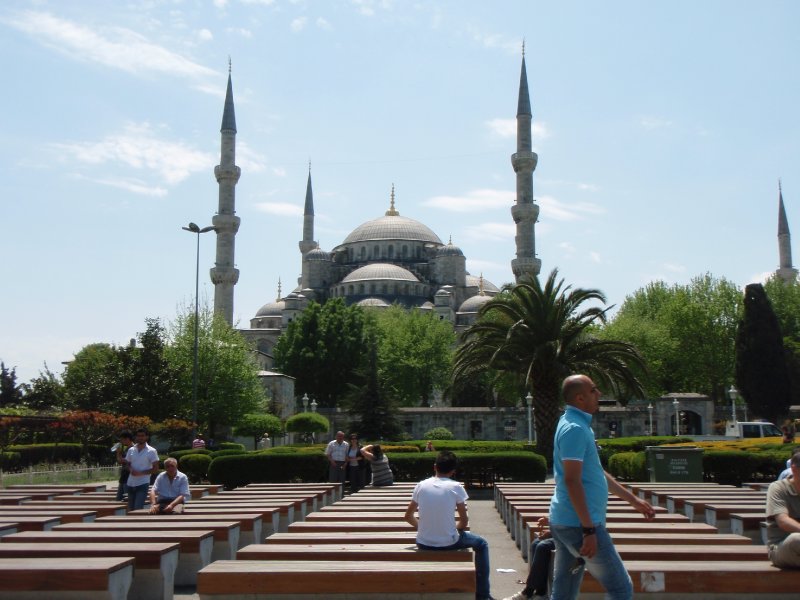 We enter the beatiful mosque and soak it in. Of course, the attraction here is the Iznik tiles, but honestly, we were able to view them much better in the Palace. 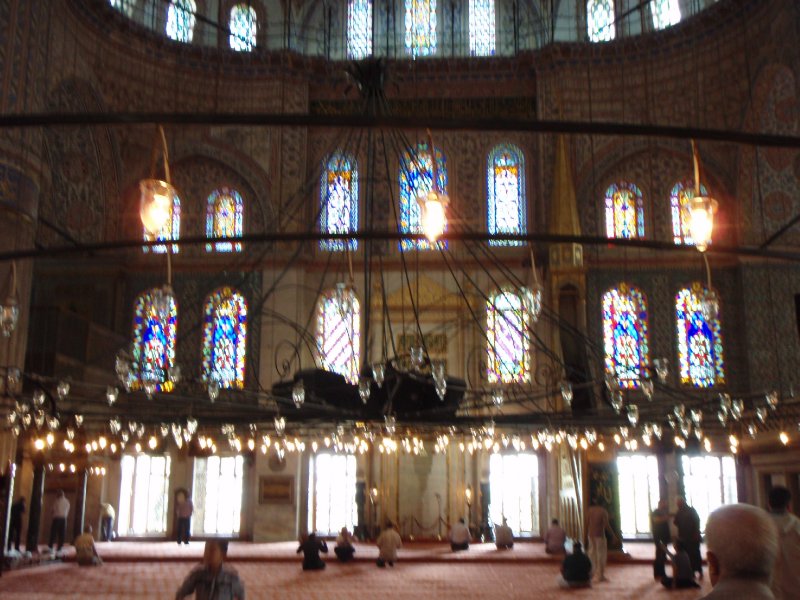 Inside the Blue Mosque of Sultan Ahmed 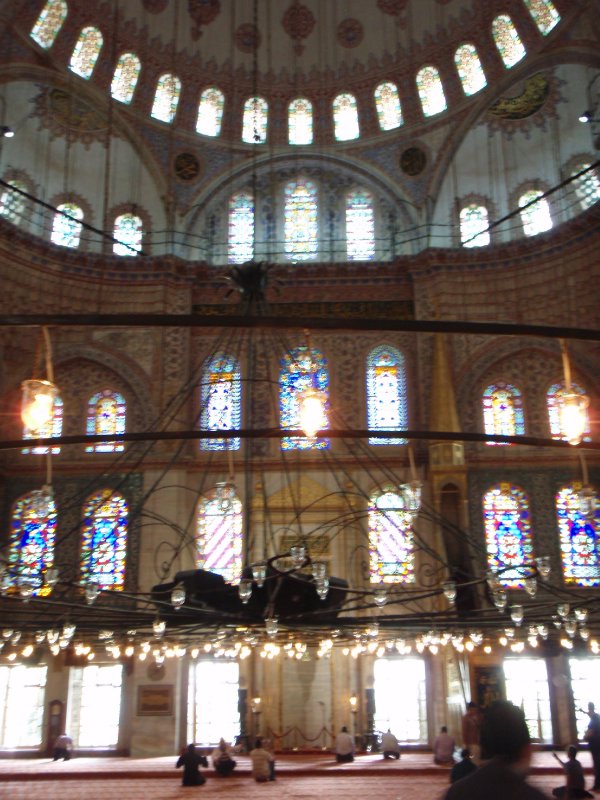 Inside the Blue Mosque of Sultan Ahmed

Nevertheless, we enjoy our visit to yet another of the world's premier places of worship. Fatih seems genuinely moved that we showed such respect for his religion by being prepared to carry our shoes and insisting on covering Mrs. Zuke's head.

Finally, although we certainly have misgivings, we allow Fatih to bring us to Nakkas, a "carpet maker". He's been upfront with us all along about it, and says that we might enjoy seeing the goods even if we don't purchase. We agree to go in. After a brief, but interesting demonstration of carpet weaving, we move upstairs to the showroom. There, with great fanfare and flair, we are shown a dazzling array of hand knotted carpets, wool and silk.

The carpets themselves were amazing. If had anyplace to put them, I truly might have been tempted. We explain that we are very impressed with the quality, but simply are not in the market. Our host is very gracious, not pushy at all, and offers to show us his jewelry and ceramic shop as well. Our eye is caught by the ceramic shop and we go in. The handcrafted work here is just amazing. We buy a quartz glazed plate in an intricate blue design after bargaining just a little. We feel we've paid a fair price for the quality of the workmanship.

It' been a long but amazing day. I'm very impressed with the welcoming atmosphere in Istanbul, and the way Turkey has seemed to successfully combined a 98% Muslim population and a secular government. There's an air of tolerance and openness here that I had not expected. This is a place I would not mind visiting for a longer period of time on a land-based tour. Fatih has done an outstanding job, and I'd recommend him highly if you're looking for a tour in Istanbul. You can reach him at fatih @ copuroglu.com.

We skip dinner tonight, and relax on our balcony. Tonight, the Princess Theater is featuring "Movie Night" with a presentation of "Little Fockers". The production show, Motor City, is being held in the smaller Vista Lounge.