Today's plan is to wander down to the Frari church, then out to San Giorgio Maggiore, finishing with a walk through Dorsorduro. Our first stop is Santa Maria Gloriosa dei Frari, in the San Polo district. Inside, we find spectacular artwork by Titian (along with his monument), a tomb for Canova (that only contains his heart), and a number of over-the-top baroque monuments. Photos aren't allowed inside, so we purchase a few postcards from the gift shop. 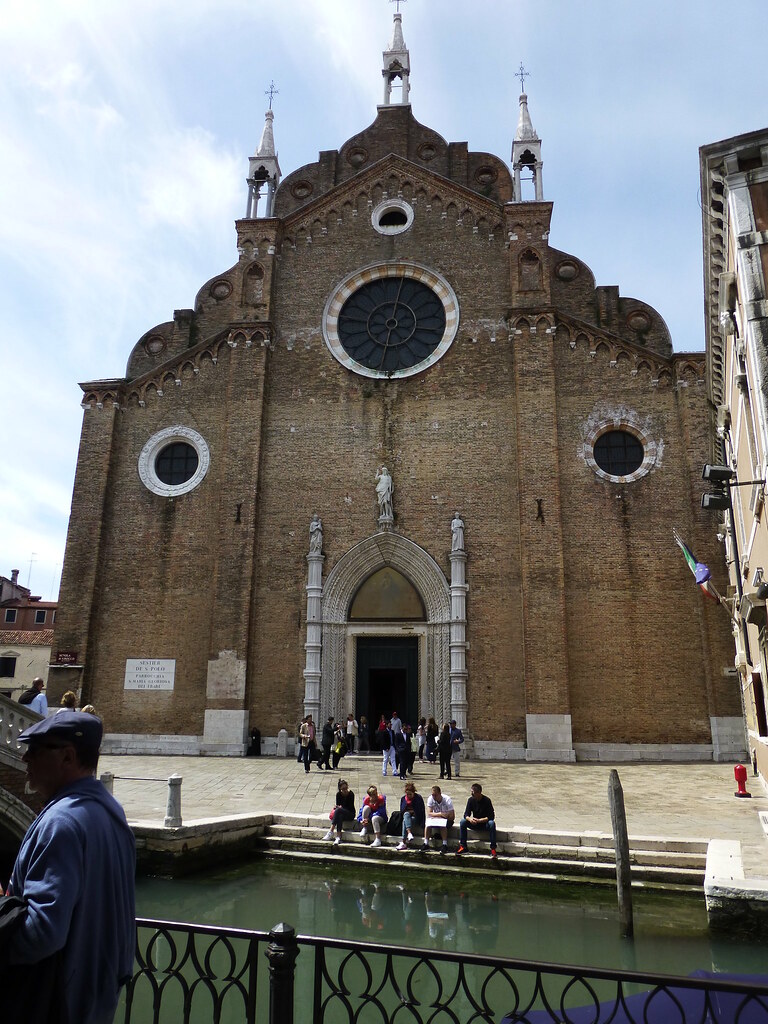 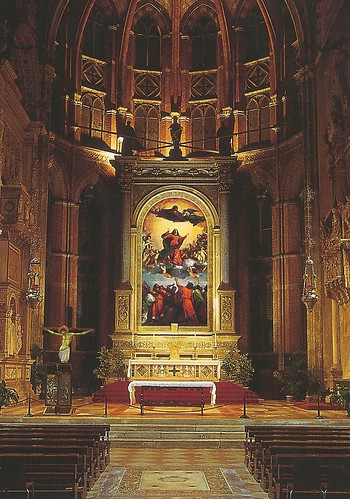 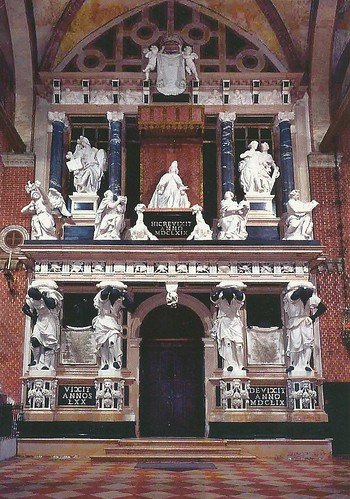 We wander down toward Piazza San Marco, to catch the vaporetto to the island church of San Giorgio Maggiore. Along the way, we pass through Campo San Toma. 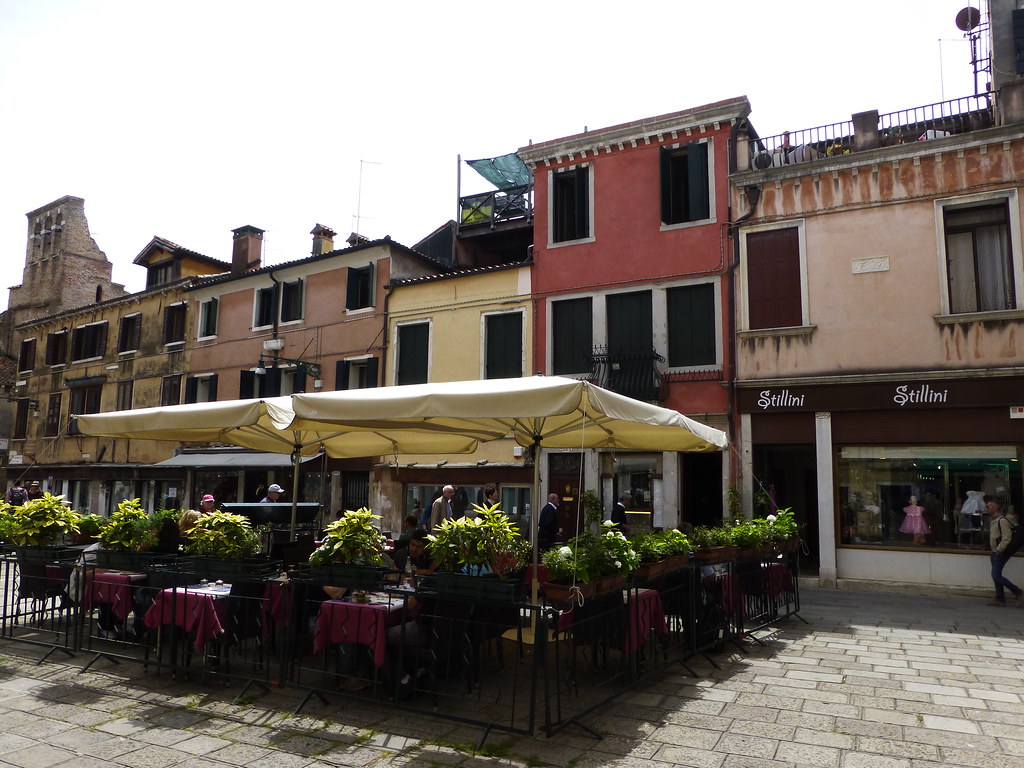 TIP: If you plan on using the vaporetto system, it's well worthwhile to purchase a daily or multi-day ticket. Individual vaporetto rides, even if only for one stop, are quite expensive. 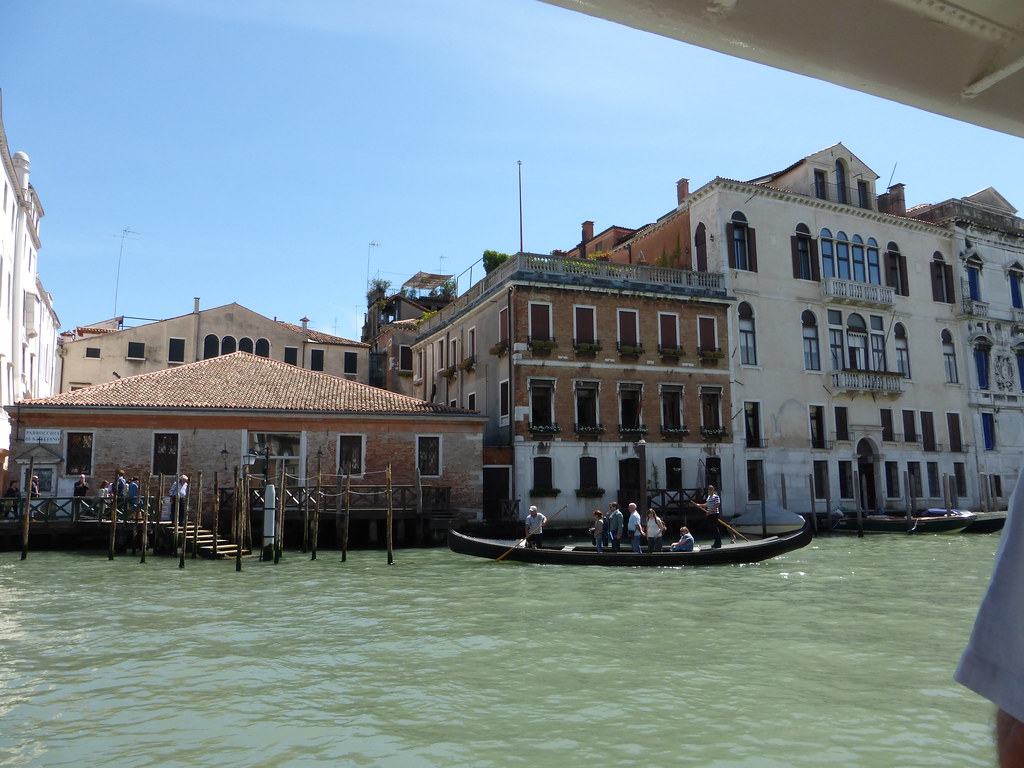 A Traghetto crossing the Grand Canal 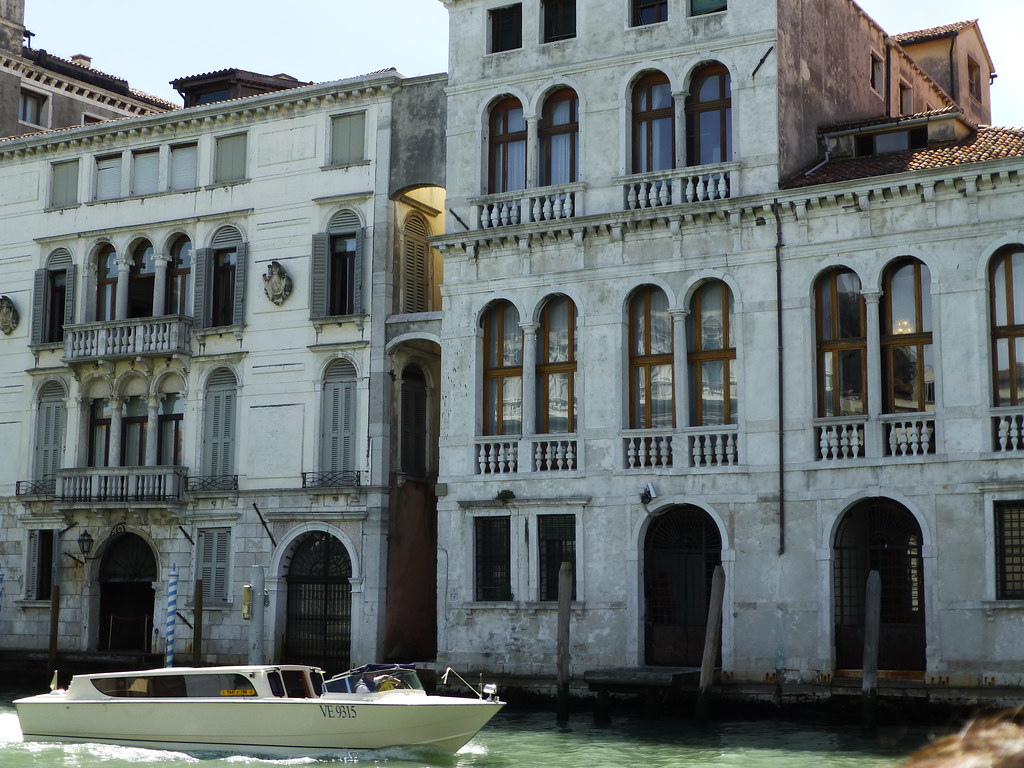 Along the Grand Canal 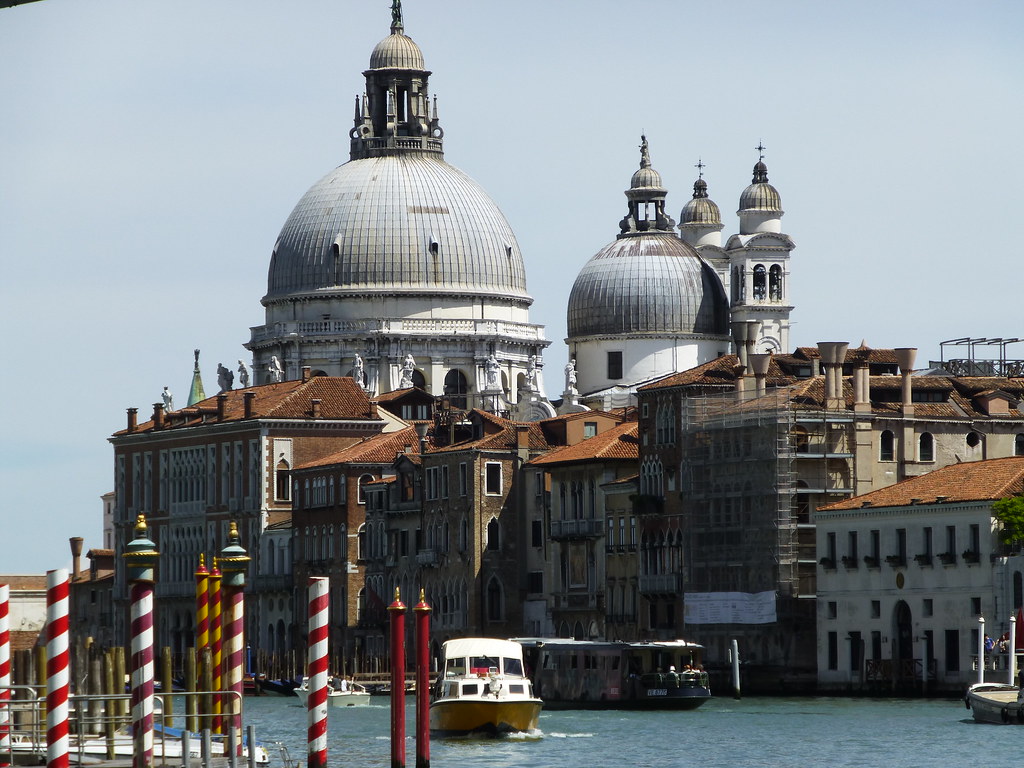 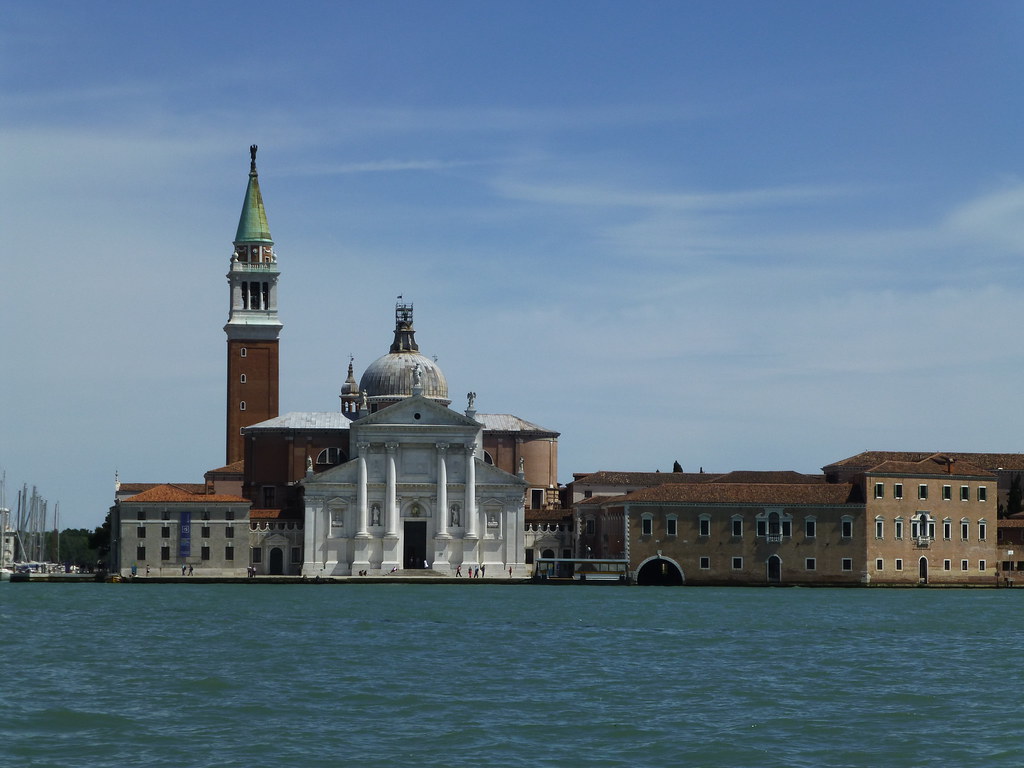 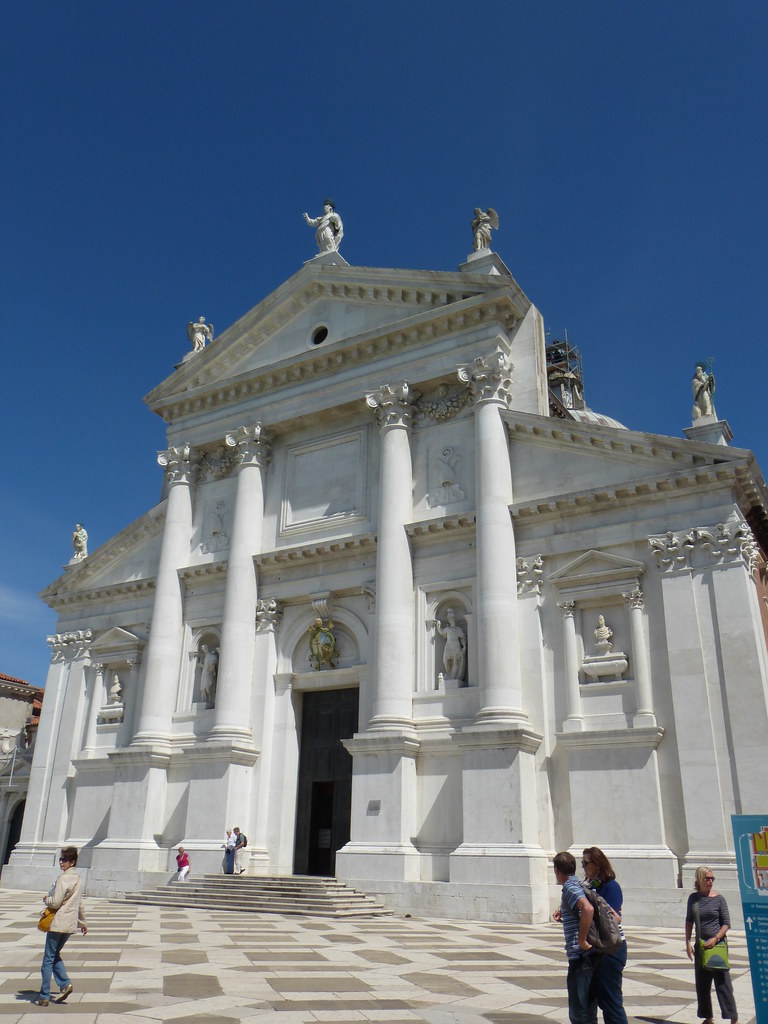 The Church of San Giorgio Maggiore is isolated on it's own island, at the eastern end of Giudecca, with no bridges, so the only way to reach it is by private boat or vaporetto. When we arrive, we find the statue at the top of the cupola is wrapped in scaffolding, part of an ongoing project to restore damage caused when the statue of St. George was hit by lightning during a storm, causing him to nearly drop his lance.

Inside, scaffolding reaches high up into the dome, and a team of conservators is working on cleaning the bronze's in one of the chapels. 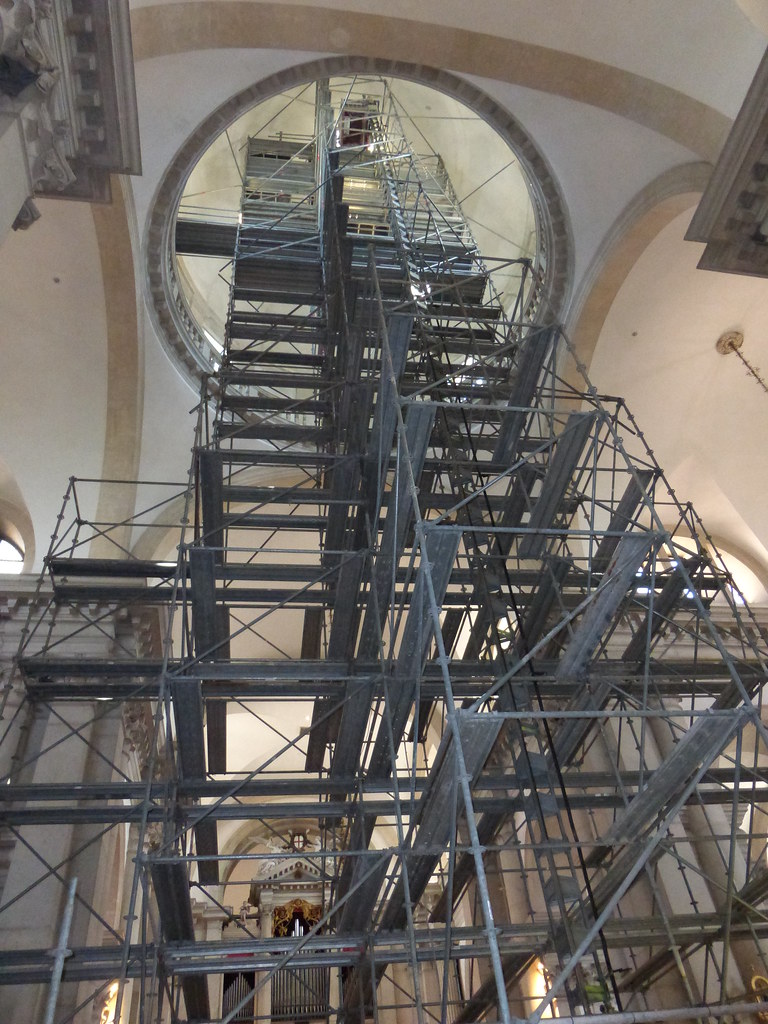 Scaffolding reaches high into the dome 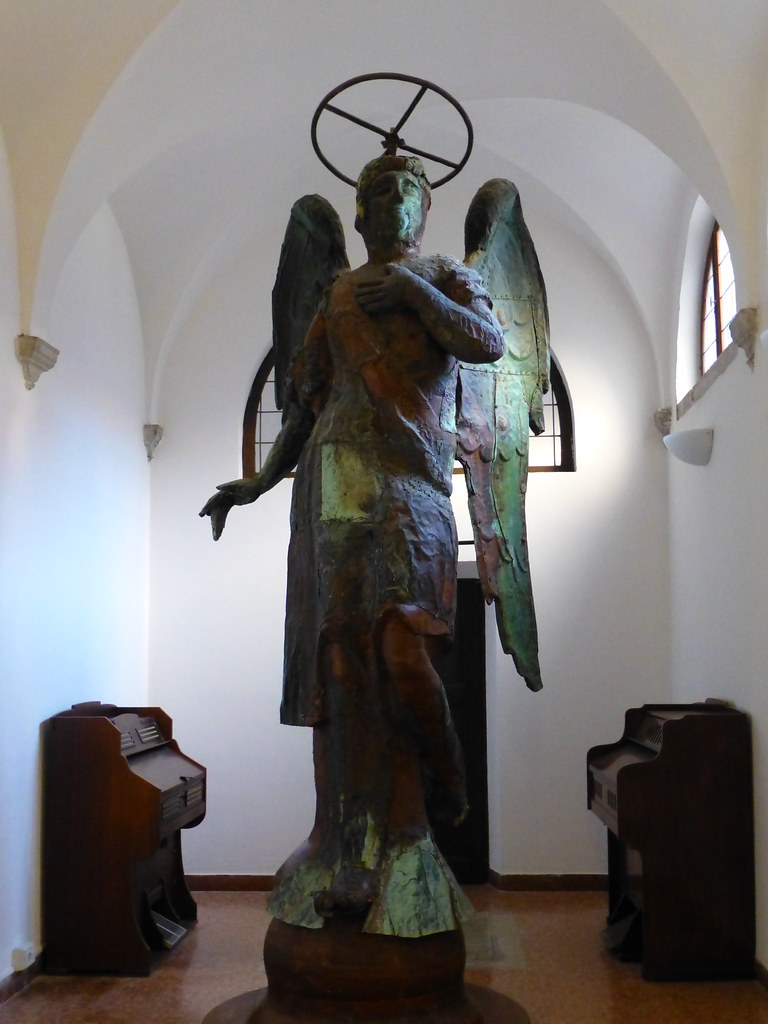 Statue removed from the top of the church for conservation 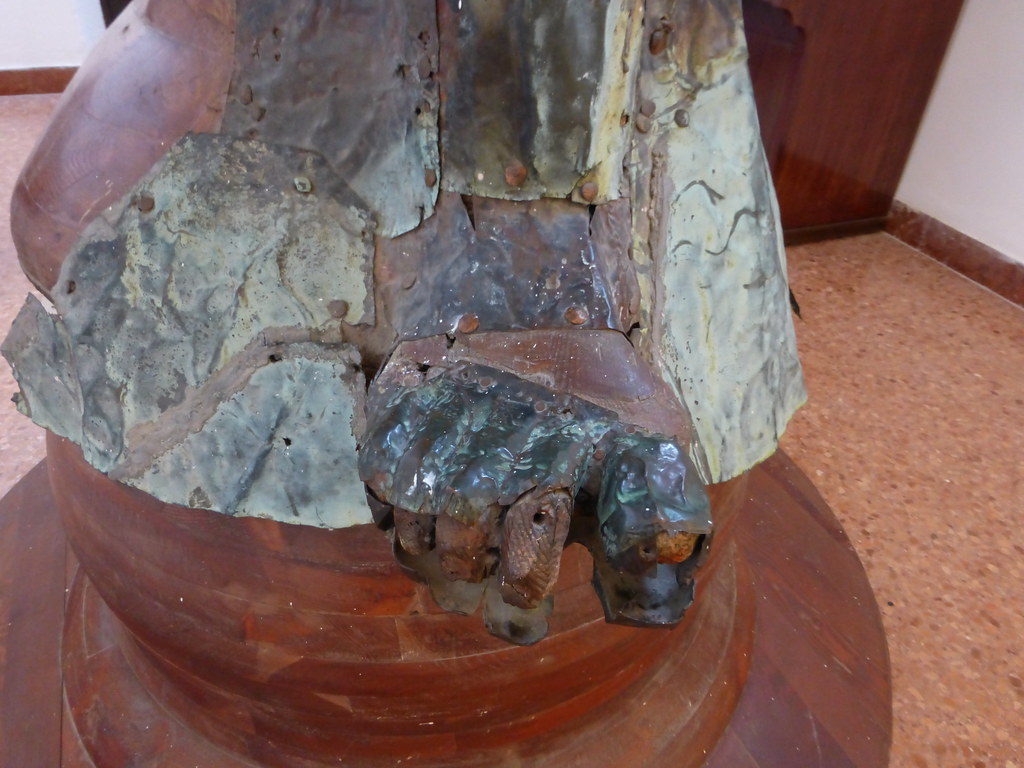 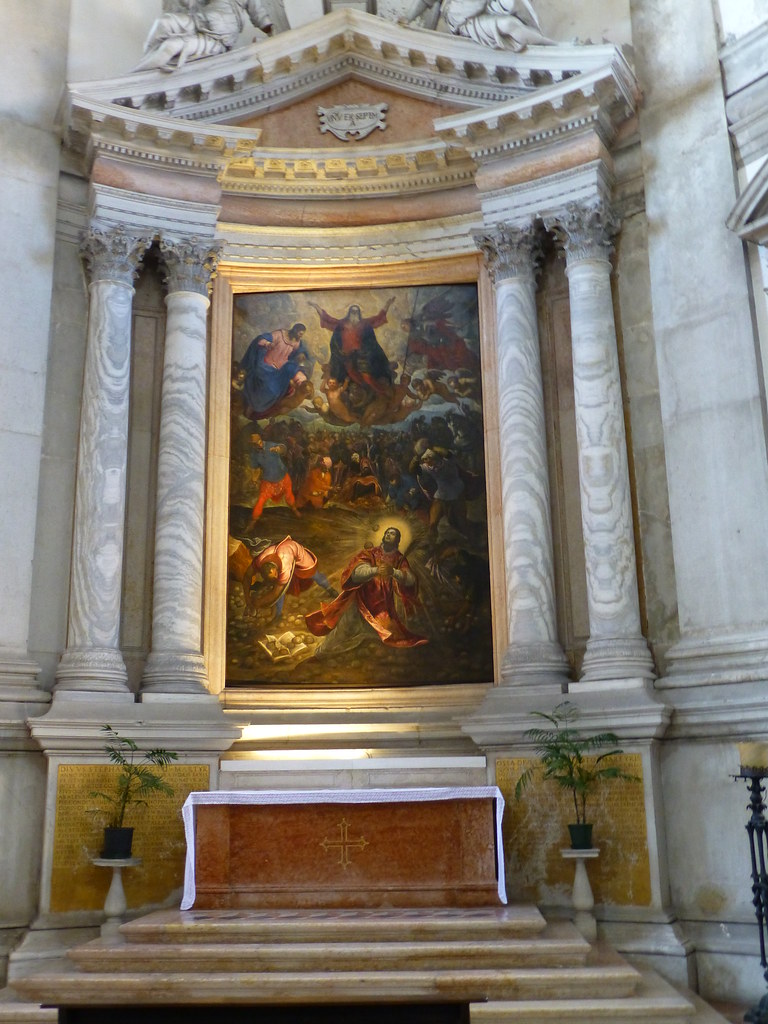 We take the elevator to the top of the bell tower for some views over Venice (stairs are not open to visitors here). 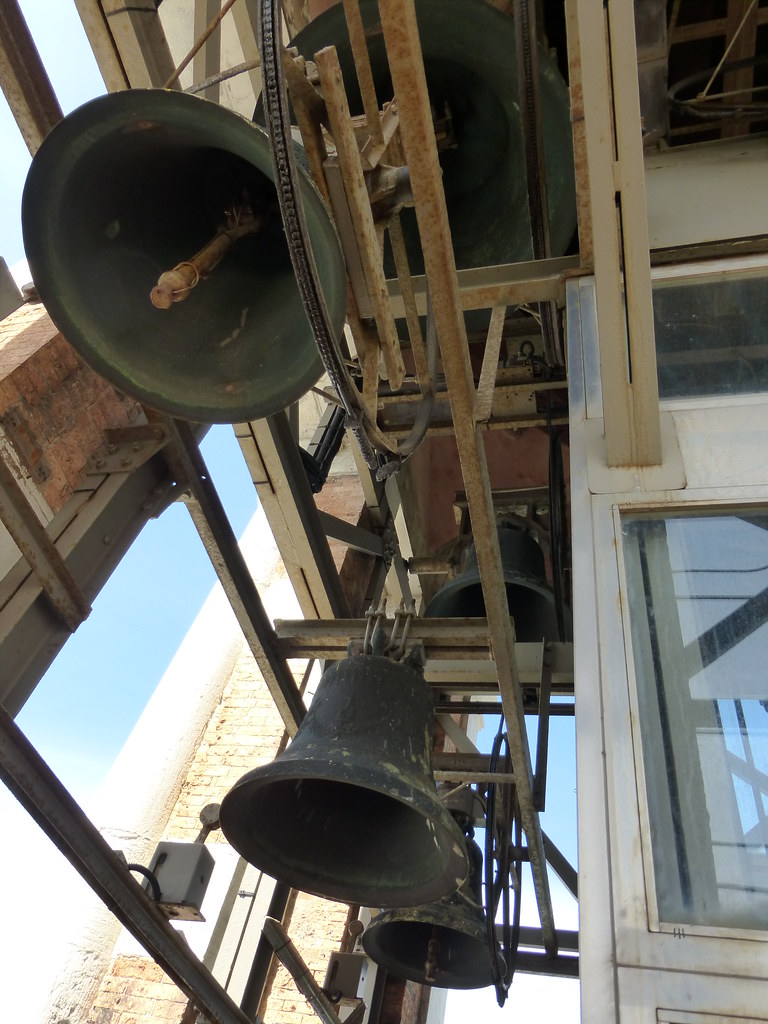 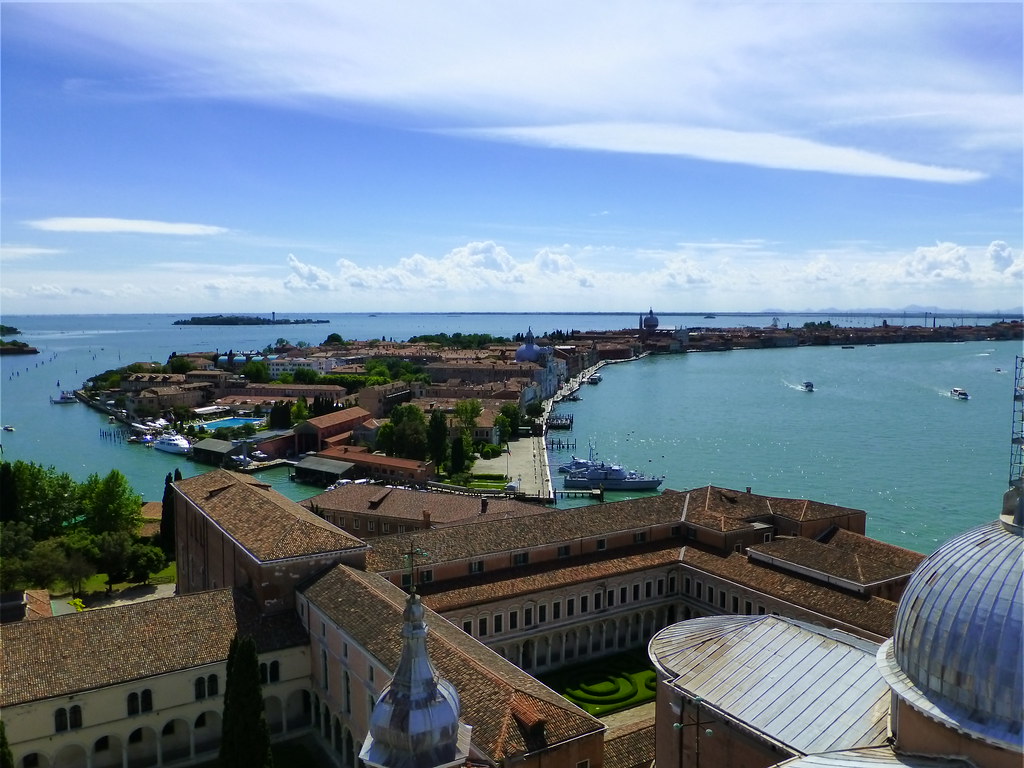 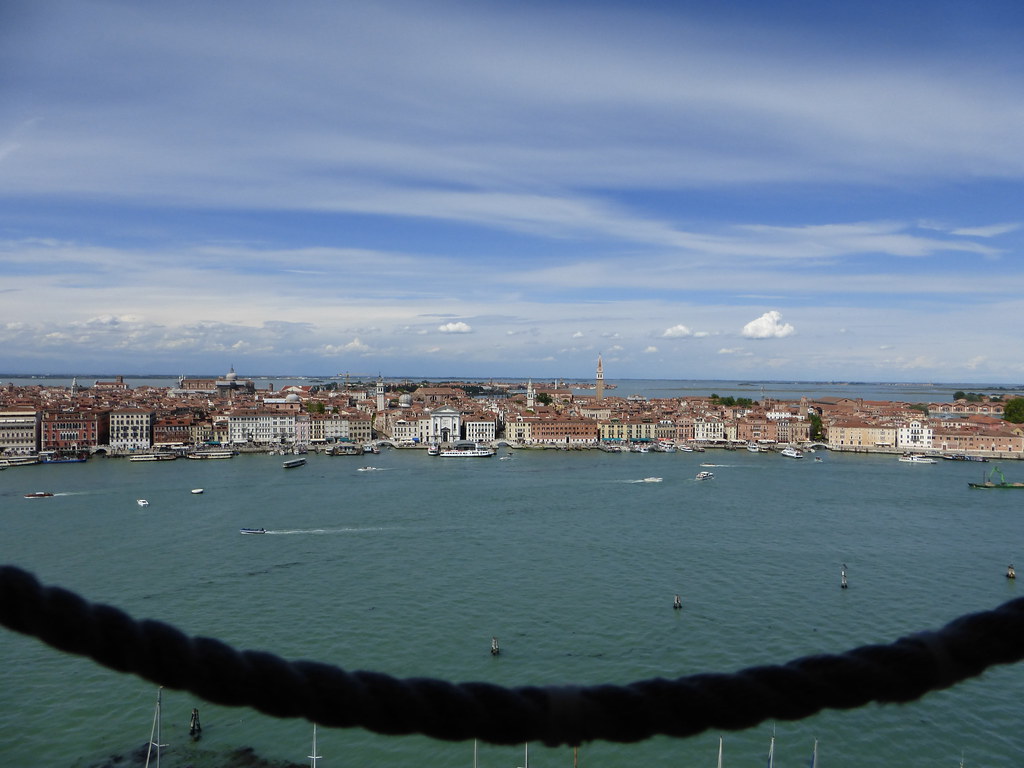 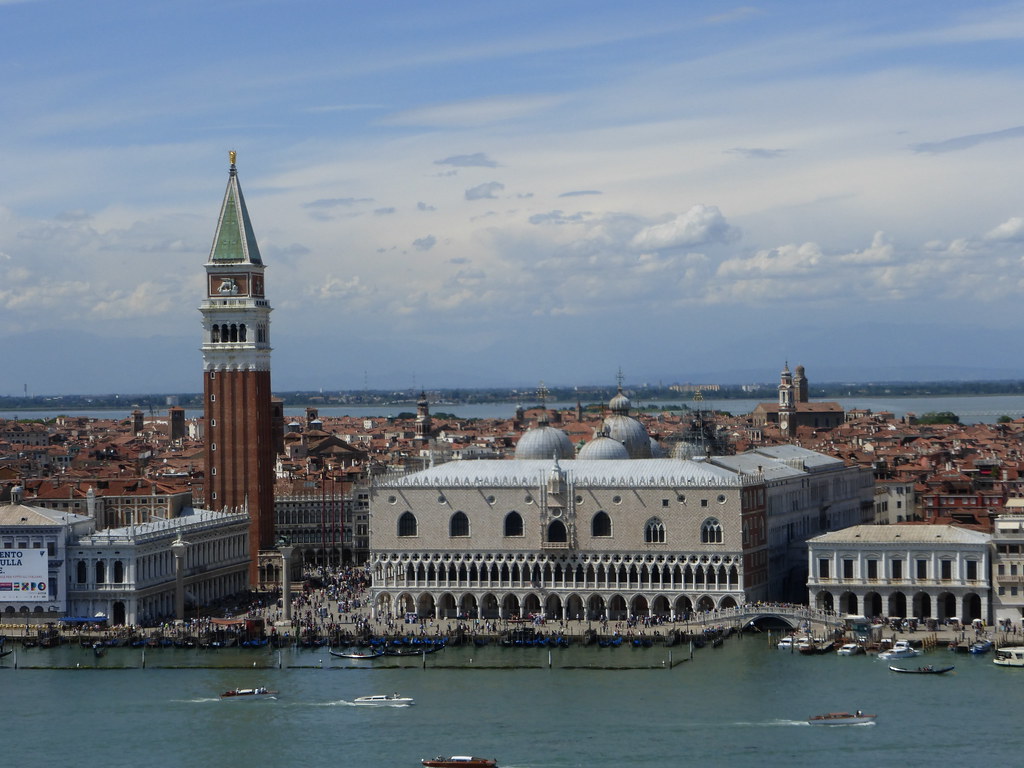 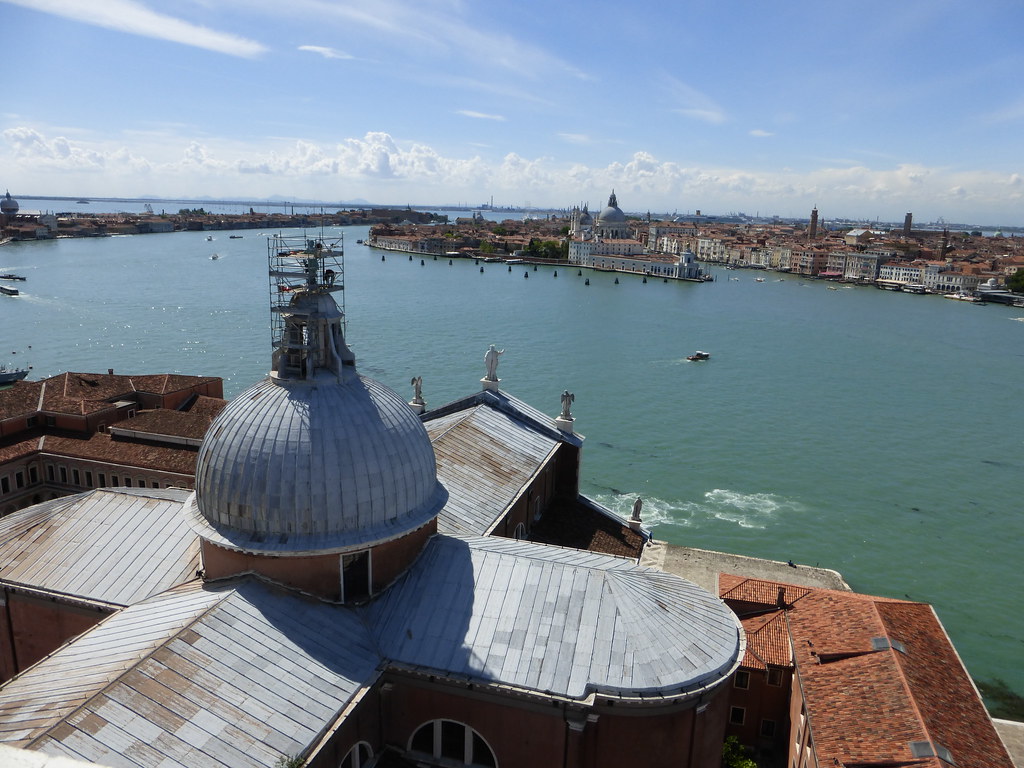 Next entry, we'll continue on with our visit to Venice.