It's a rainy Thursday on May 22nd, our final day in Rome. Today, we're going to do a little cleanup work, visiting some areas of Rome we have yet to see. We start off the day with a short walk, just a few blocks from our apartment, to visit the Fontana delle Tartarughe, the "Fountain of the Turtles".

The fountain is located in the Piazza Mattei. Orginally, it sported water-spouting dolphins instead of turtles, held in the air by the figures surrounding the basin. Unfortunately, the aqueduct serving this piazza just didn't have enough velocity to support all those dolphins, and all they did was dribble. They were removed and placed on a more appreciative fountain elsewhere. 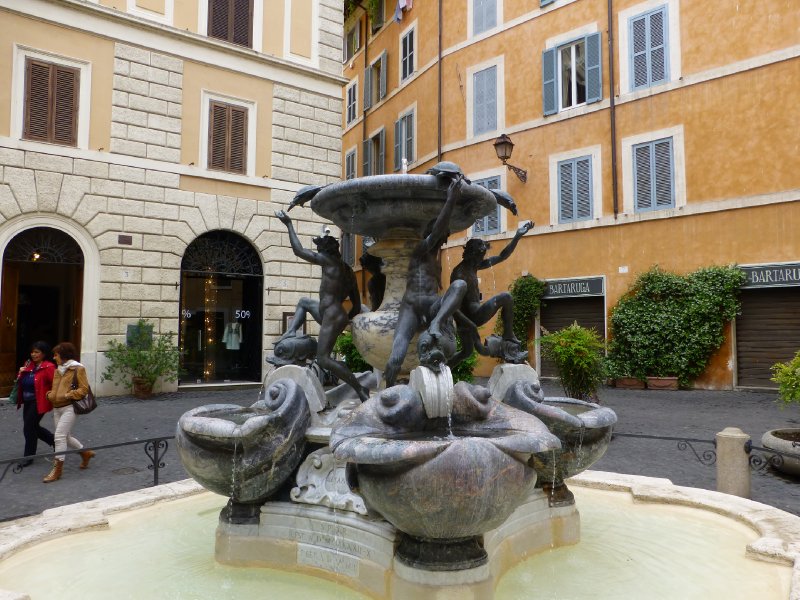 About 75 years later, someone realized the figures looked a bit ridiculous reaching into the air, since they were no longer holding dolphins. An artist, probably Bernini, was hired to cast some turtles and add them to the rim of the basin, giving those outstretched fingers something to tickle. 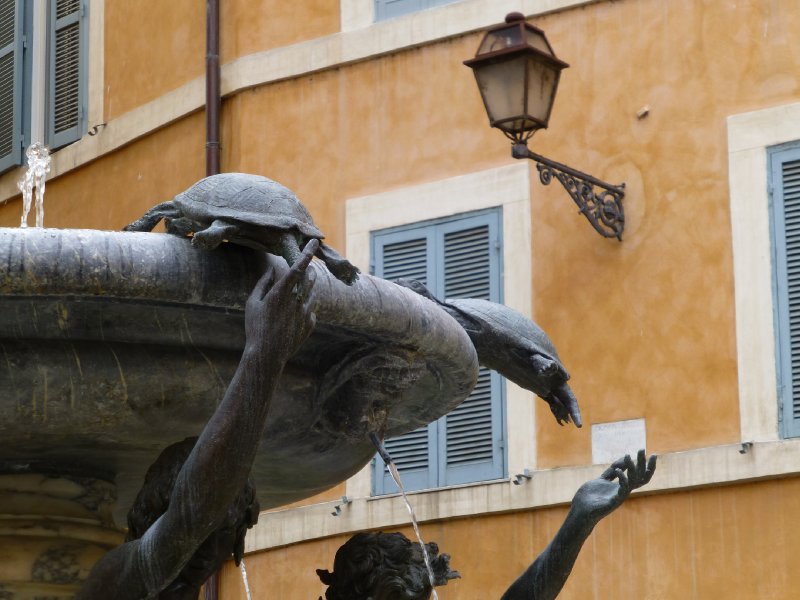 Next stop is Castel Sant' Angelo, across the river. We brave the gauntlet of living statues and jelly monster vendors that ply their trade on the Ponte Sant' Angelo. Security police shoo them away, but it's like trying to hold back the ocean with a teaspoon...as soon as one vendor vacates, another trickles into his space. 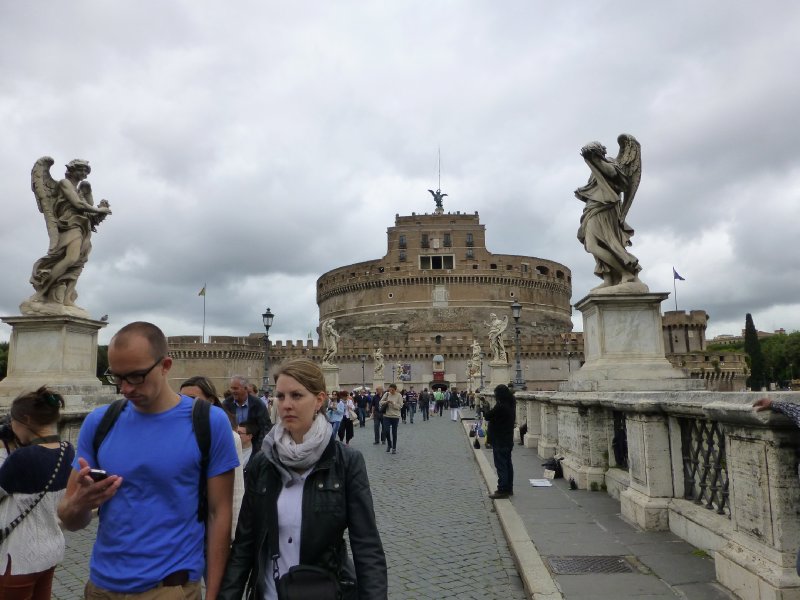 Castel Sant' Angelo was originally the tomb of the Roman Emperor Hadrian. It resembled an enormous drum, with a man-made hill full of trees atop it. By the early 5th century, it had been incorporated into the defensive walls and turned into a military fortress. In the 15th century, the Popes decided it would make a great castle, and began adding Papal apartments to it, dedicating it to the Archangel Michael.

Inside, a wide spiral ramp winds around the drum:

Eventually, you climb a stairway to emerge into the sunlight in the Courtyard of the Angels. 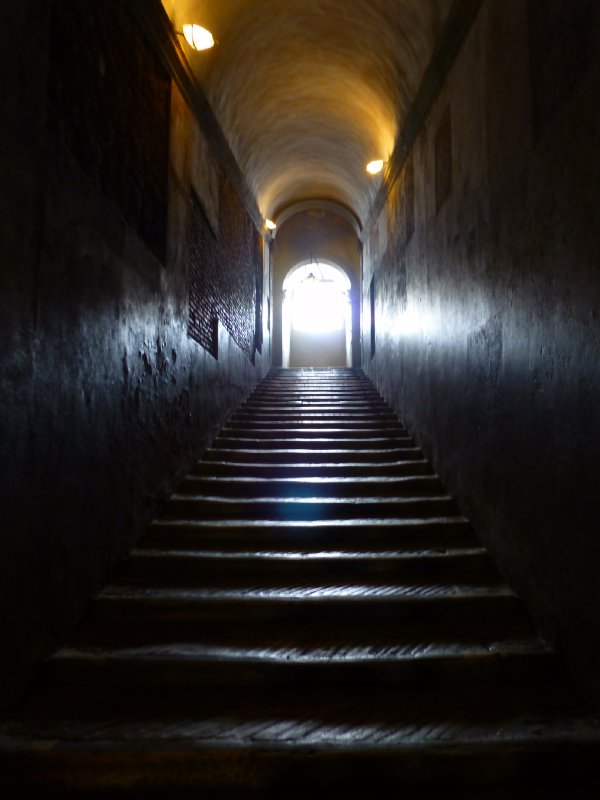 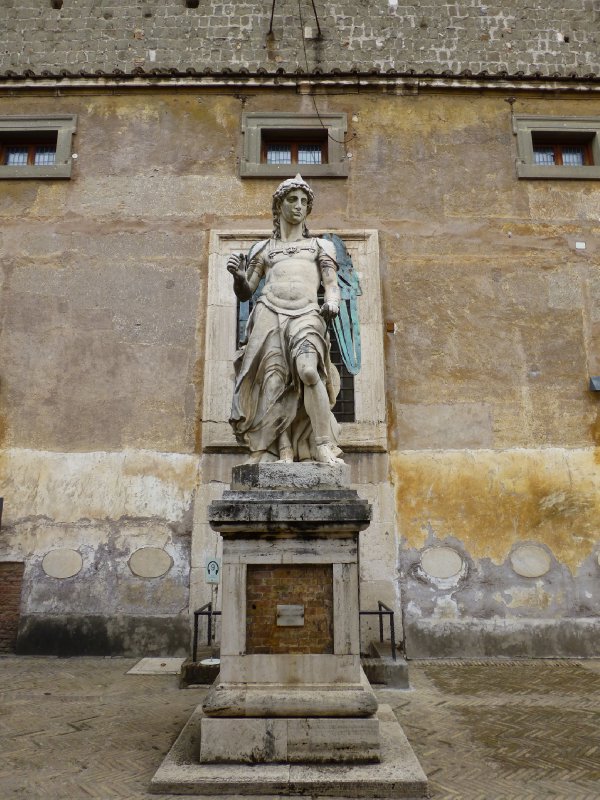 Congratulations! In ascending that stairway, you've passed through one thousand years of history!

The Papal apartments are all museum spaces now. A temporary exhibit has been set up, highlighting art and archaeology that had been stolen and recovered. This fossil, part of that collection, catches our eye. 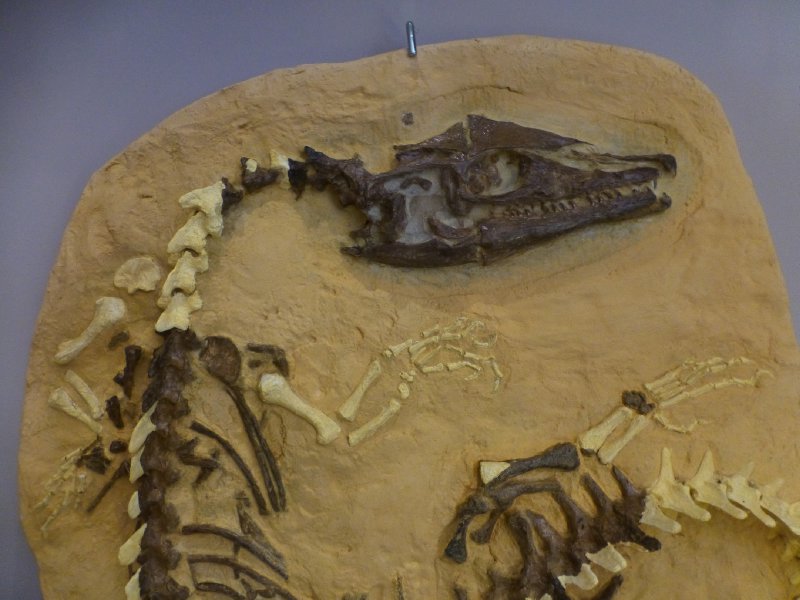 The exhibit has been constructed using false walls...we peek behind them, and spot the original collections of medieval weaponry that these rooms normally display. We're not too disappointed...the weapon collection at the Doges Palace in Venice was, in our opinion, much more comprehensive and entertaining.

Ascending from the courtyard, we begin passing bees carved into the ornamentation. We remember our history lesson from our first visit to Rome, and recall that these bees were the family symbol of the Barberini's, one of whom was elevated to Pope in the 1600's. 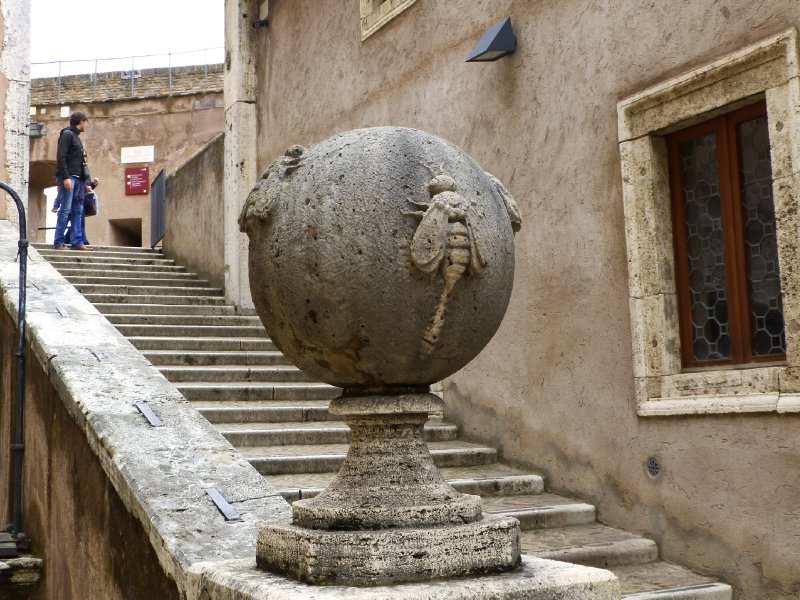 We reach the highest point that tourists are permitted to go, just below the level of the massive statue of St. Michael brandishing his sword that crowns the structure. We have sweeping views of Rome and the Vatican from up here. 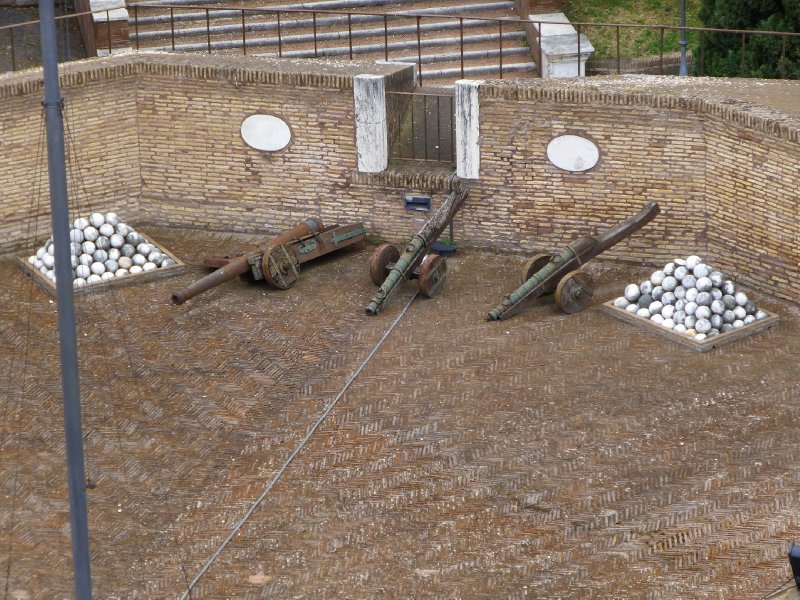 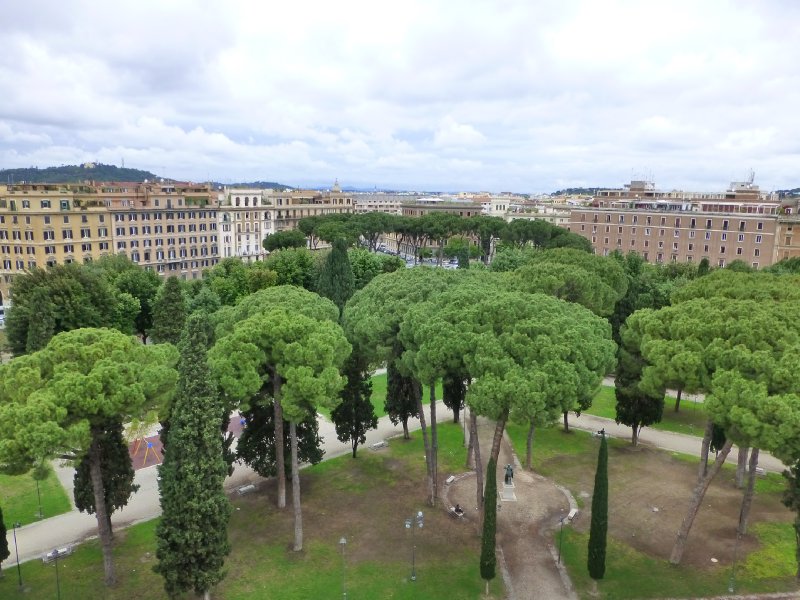 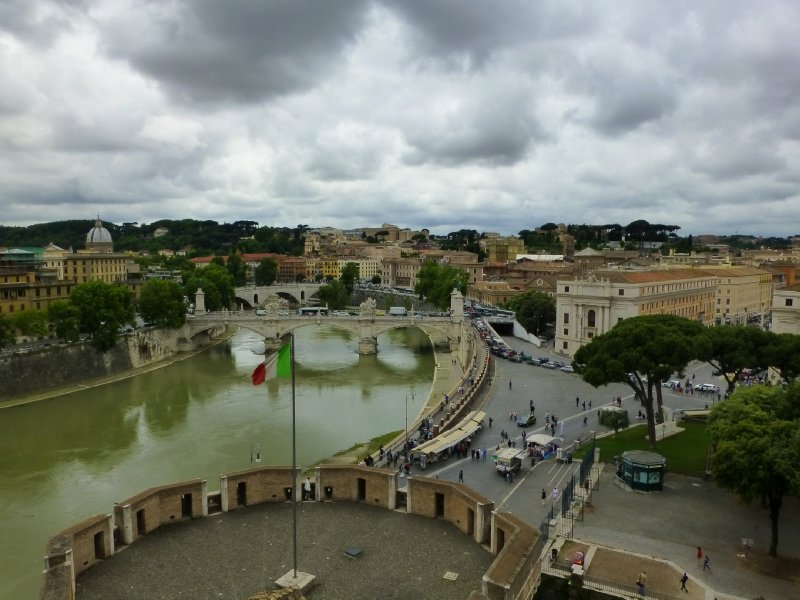 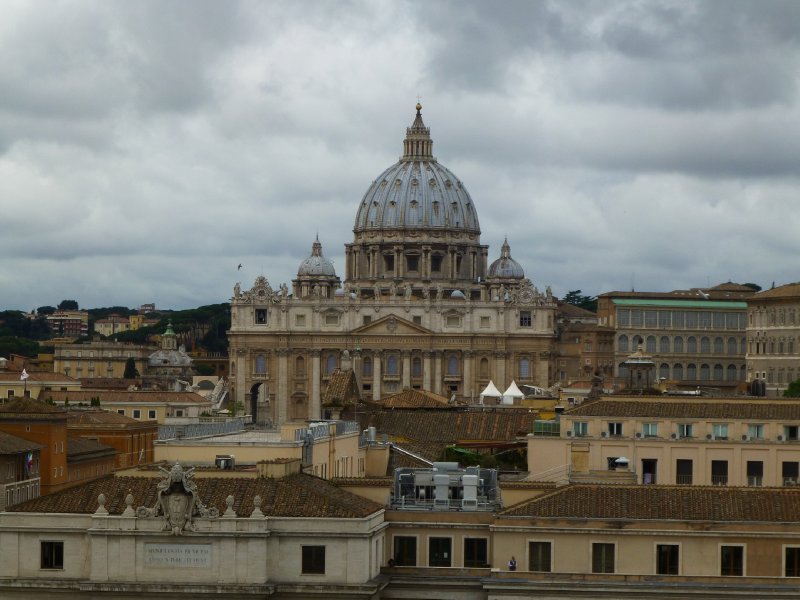 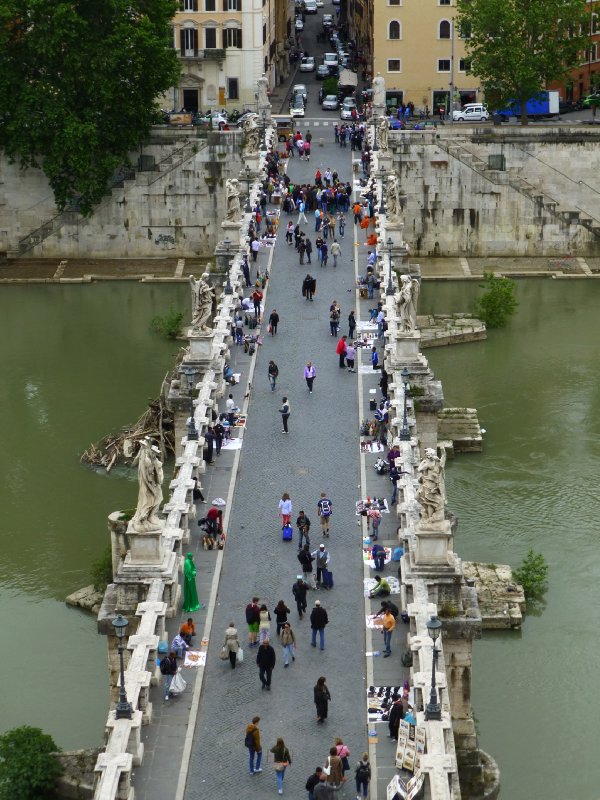 Ponte Sant' Angelo. Note all the vendors and buskers lined up along both sides of the bridge. 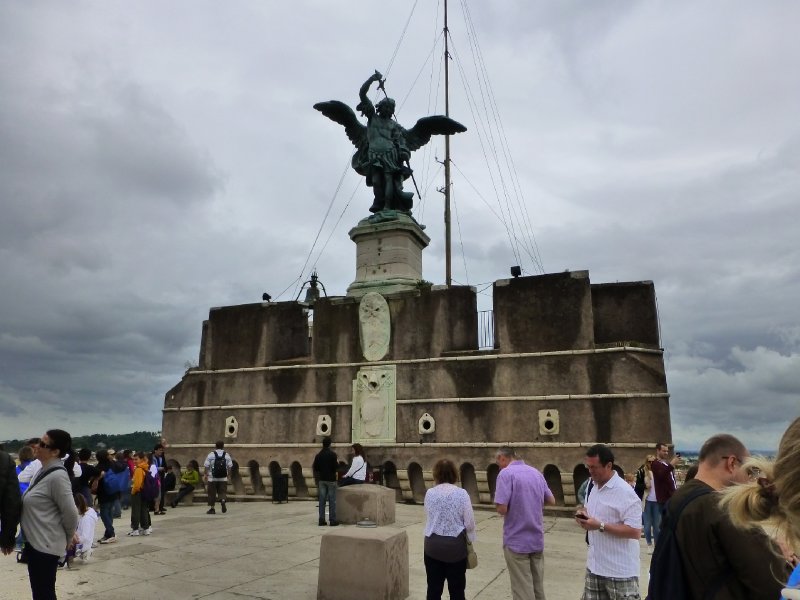 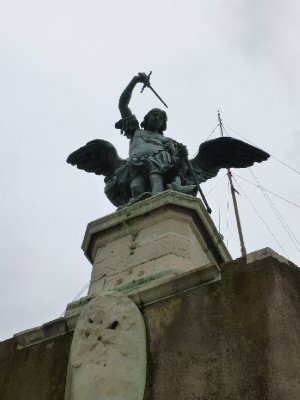 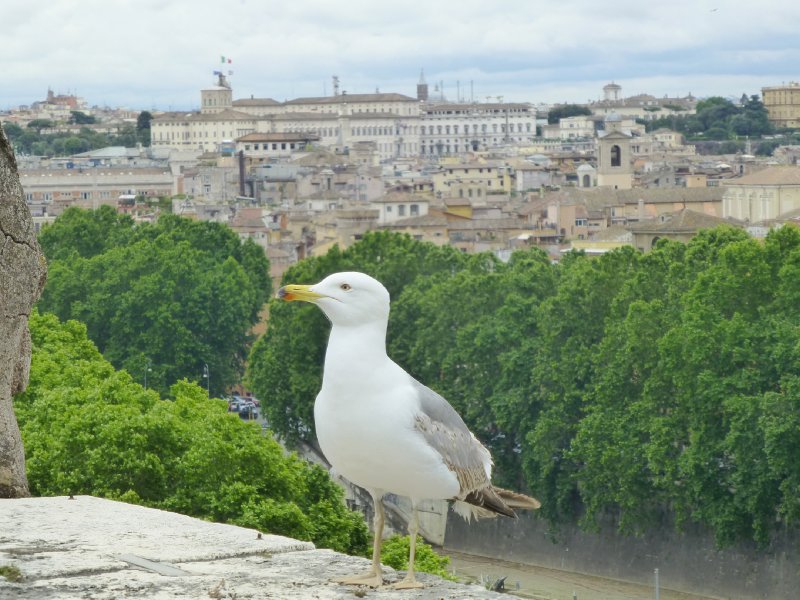 Since we're in Vatican City anyway, we decide to make an attempt to climb the dome at St. Peter's. We head down to St. Peter's Square, but barricades are being put up just as we arrive. A conference of Bishops is about to begin, and St. Peter's is being closed to the public. 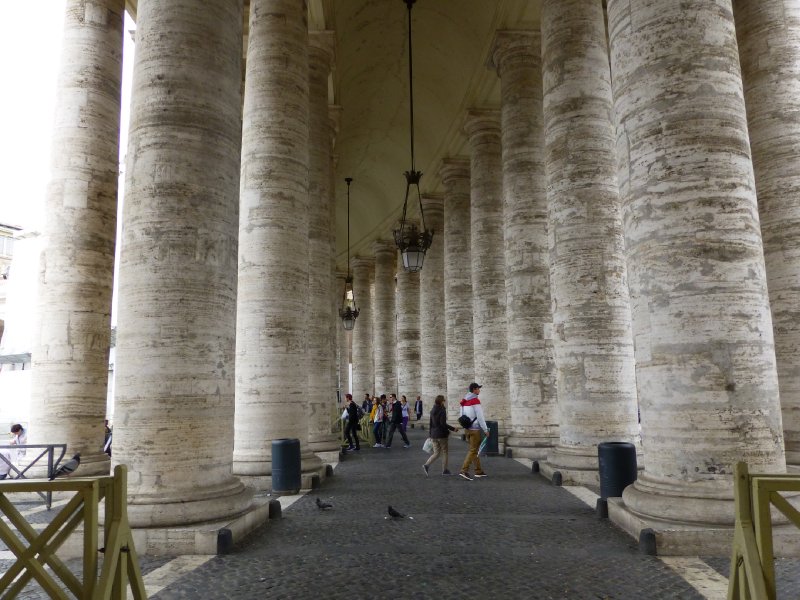 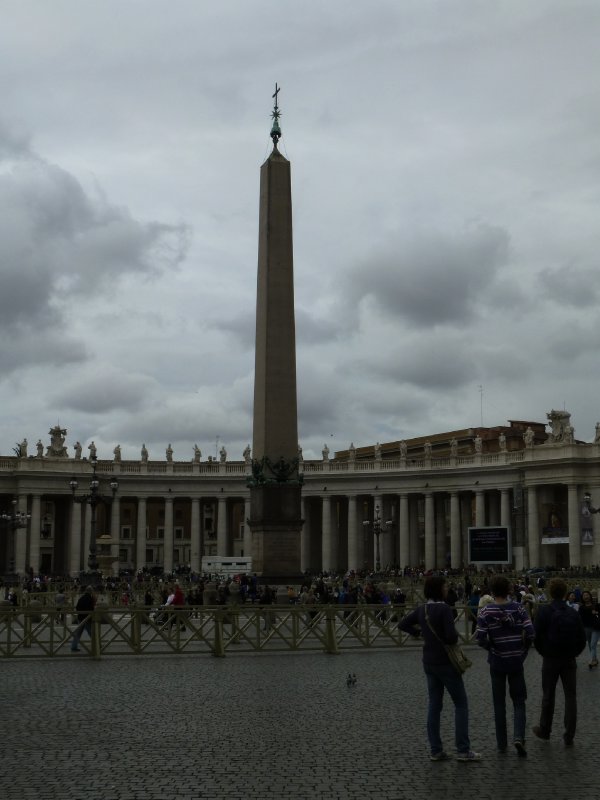 Leaving the walls of the Vatican, we stop for a bite to eat at a small pizzeria with a single table. As we're eating, a woman comes begging at our table. Oddly, she's not looking for money...she actually wants some of our pizza. We give her a few pieces, and she wanders away.

We head back across the Ponte Sant' Angelo, and begin walking along the Tevere. At the next crossing, we see the impressive Palace of Justice. 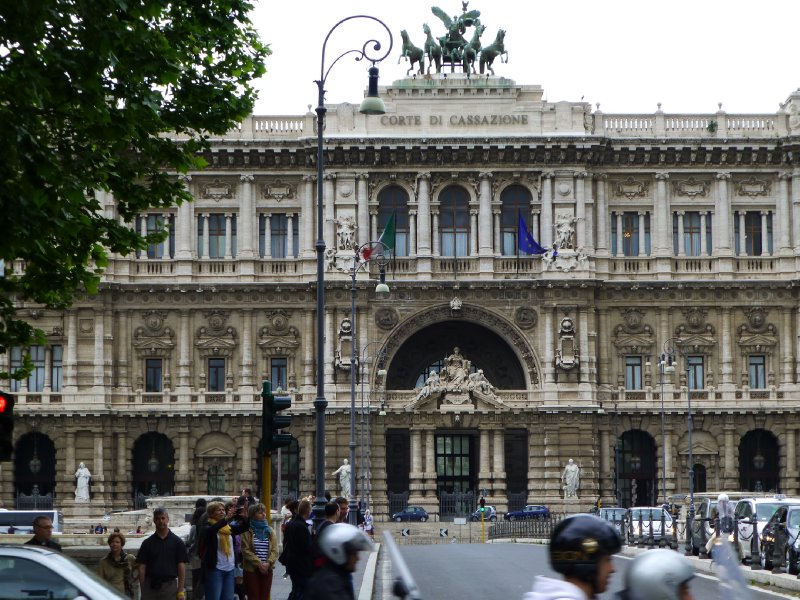 Not far away, we come across this rather amazing piece of artwork, painted on the third-floor wall of a residence: 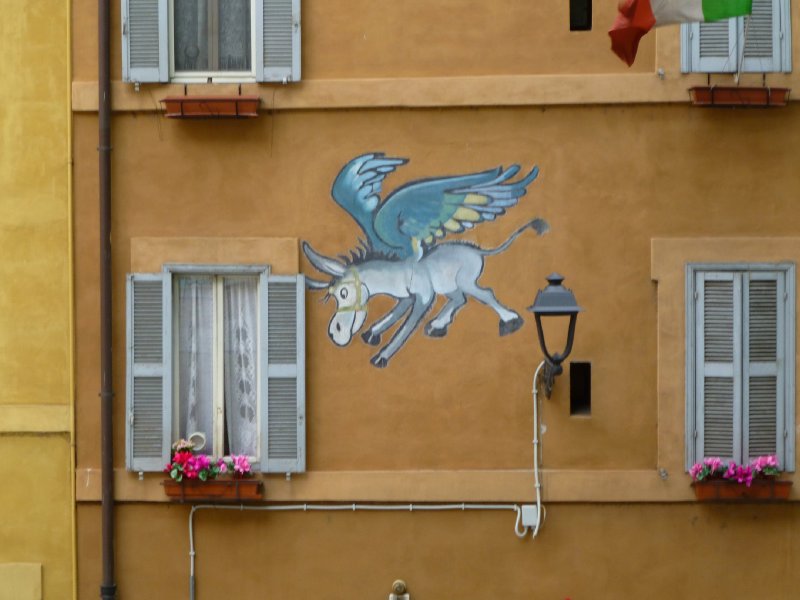 We head up to Piazza del Popolo, the major piazza that adjoins the Borghese Gardens and the Via del Corso. Piazza del Popolo is an expansive area. We can see tourists clambering up onto the fountains, to pose with the carved animals. Street performers, jelly monster vendors and living statues all have plenty of elbow room to ply their trades. 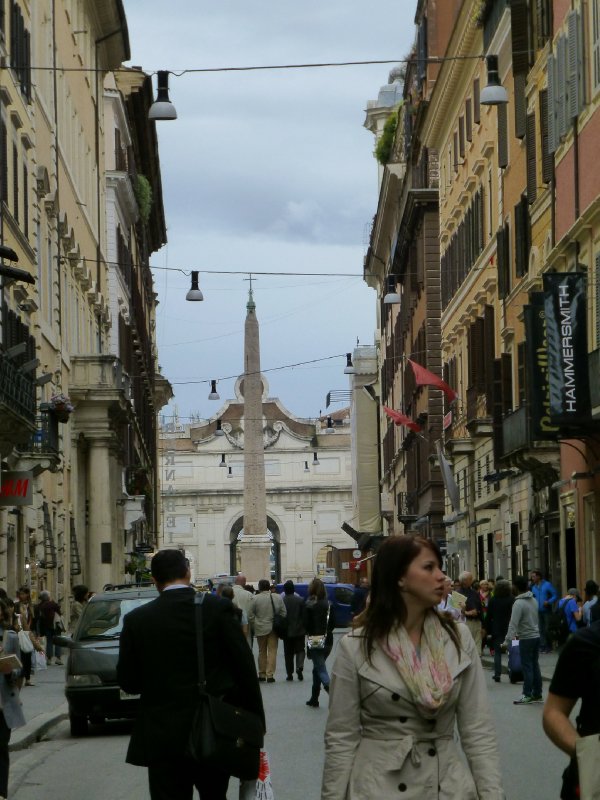 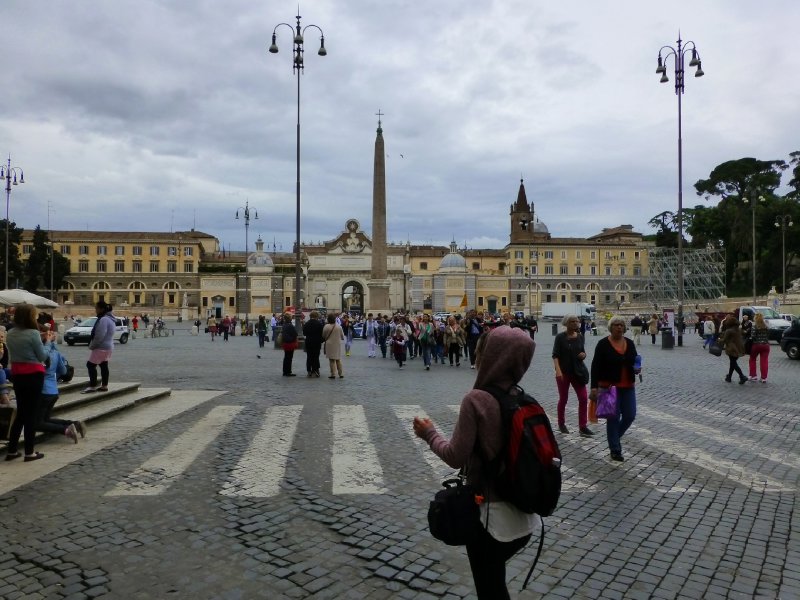 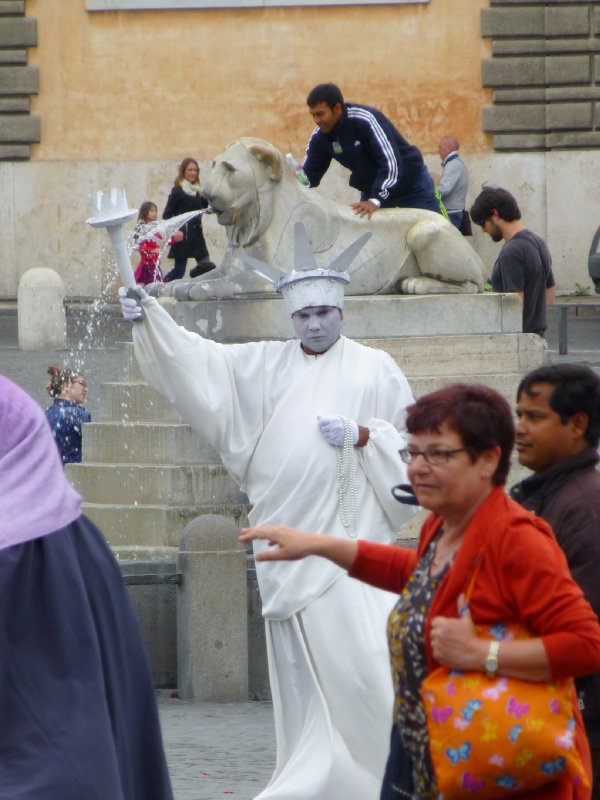 Which catches your eye first, the guy climbing on the lion, or the Statue of Liberty with white robes and pearls?

Flanking the Via del Corso exit of Piazza del Popolo are the "twin" churches of Santa Maria dei Miracoli and Santa Maria in Montesanto. The two churches appear at first glance to be mirror images of each other, but they're actually quite different. 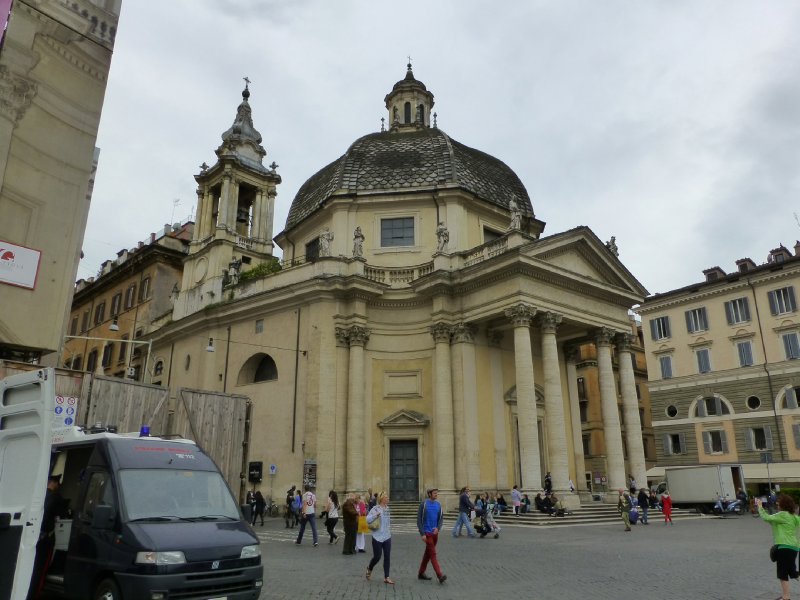 Our travels take us down past the famed Spanish Steps, crowded with tourists despite the showery weather. 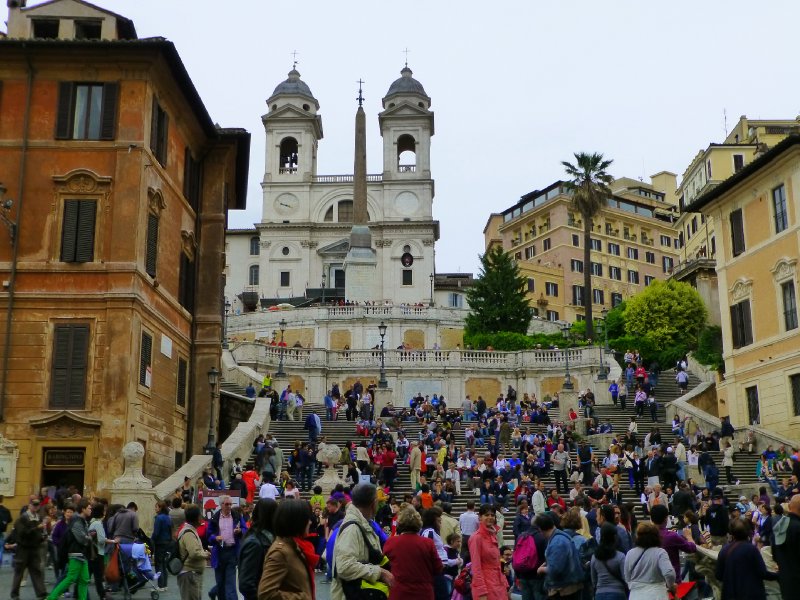 It's time to catch a bus back to our apartment. The nearest stop is at the Parliament building. As we wait, we catch sight of this bunch of young tourists laboring up the hill on pedal-powered hexacycles. Shortly after this photo was taken, they gave up trying to pedal, and got out to push. 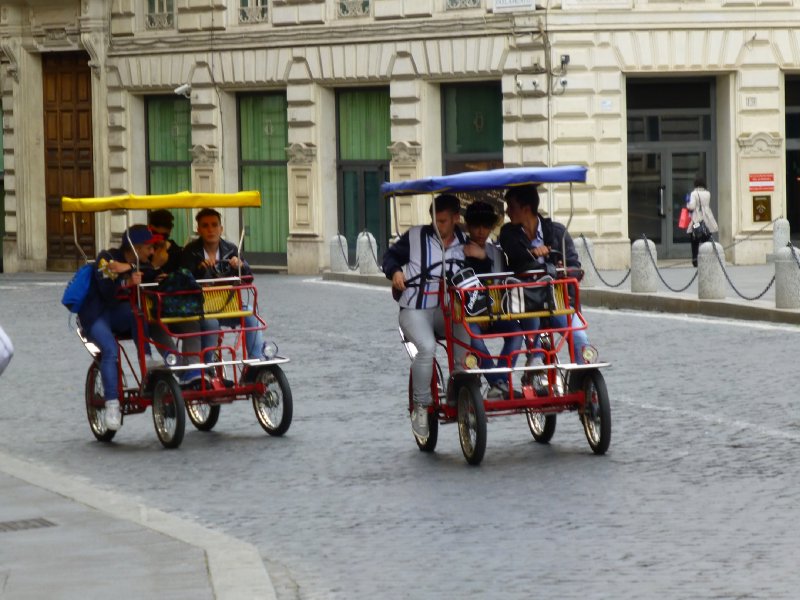 Tonight, we head back to Al Fontanone in Trastevere for our farewell dinner. Tomorrow we'll be heading back home. It's time to say arrivederci to Roma.

Next entry, we'll wrap things up with some final thoughts on this trip. See you then!

Posted by Zukini 17:30 Archived in Italy