A Trip to the Past: Pompeii and Herculaneum

It's Friday, May 17th, and today we're going to be heading to Pompeii and Herculaneum (Ercolano) for some history. For those of you who don't already know, these two cities were buried during the cataclysmic eruption of Mt. Vesuvius in AD 79, entombing them until they were rediscovered in 1599.

We're going to use public transportation for our trip today, and we've purchased a set of Unico Campania 3T tourist transportation tickets. These tickets allow us unlimited use of the bus and commuter train network throughout Campania for 3 days, and are priced at 20€ each. With the number of bus and train segments we're planning on using, we've worked out that it's about a break-even proposition, but it saves us the trouble of having to buy tickets at Tabacchi shops.

We walk up the hill to the Sorrento station for the Circumvesuviana commuter train, for the roughly 40 minute ride to Pompeii Scavi. 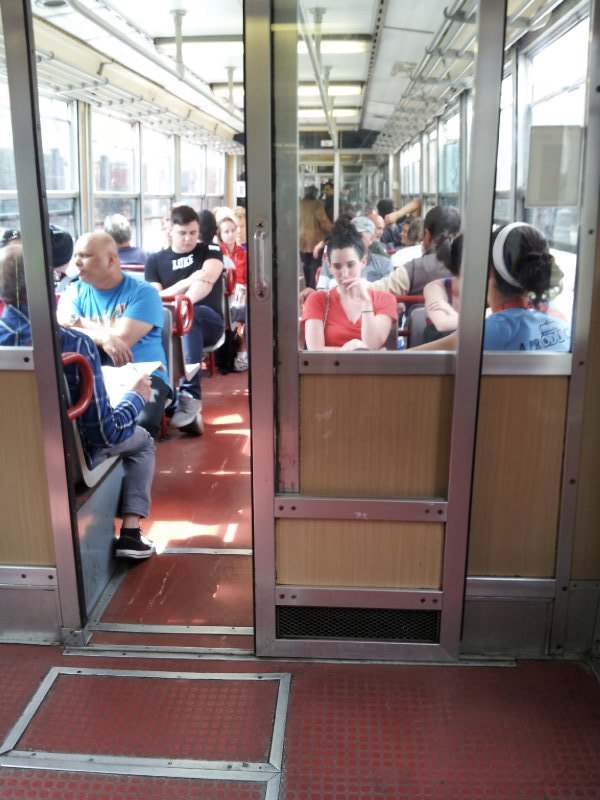 Pompeii is a sprawling site, covering the space of a small city. We pick up a map at the ticket booth, but they're out of the accompanying guidebooks. It's windy (we've been told that the area is experiencing the effects of sirocco winds out the Sahara, resulting in windy, unsettled conditions), and dust devils of dirt and grit sweep across the site. 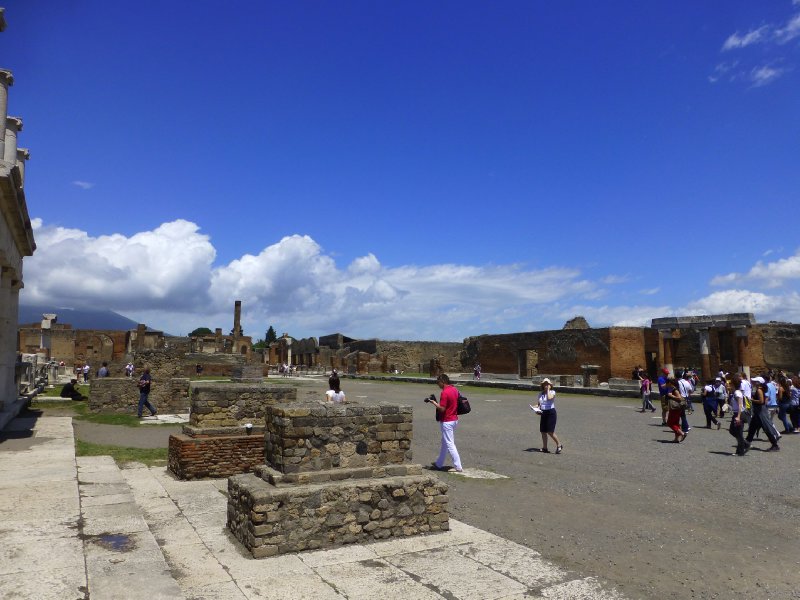 We come across the storage areas, where pottery, amphorae, and architectural fragments are being kept. Here, we also find some of the plaster casts of the victims of the volcanic eruption. When the site was excavated, archaeologists would occasionally come across voids in the volcanic ash covering the site. They injected these voids with plaster, and when the ash was chipped away, they would find the plaster had taken the form of the unfortunate people who had suffocated in the ash fall.

These plaster casts are moving and tragic, but also so forlorn. Here they sit, some in glass cases, some not, almost as an afterthought in a cluttered storage room. 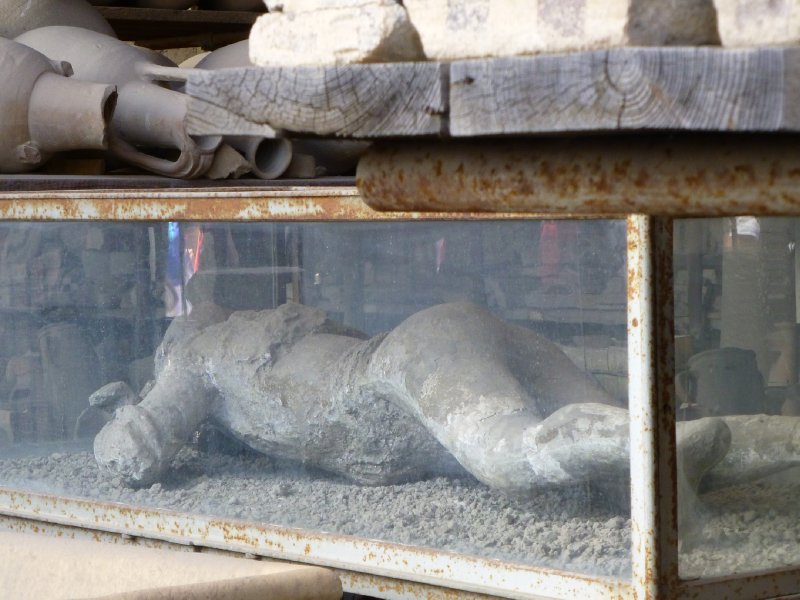 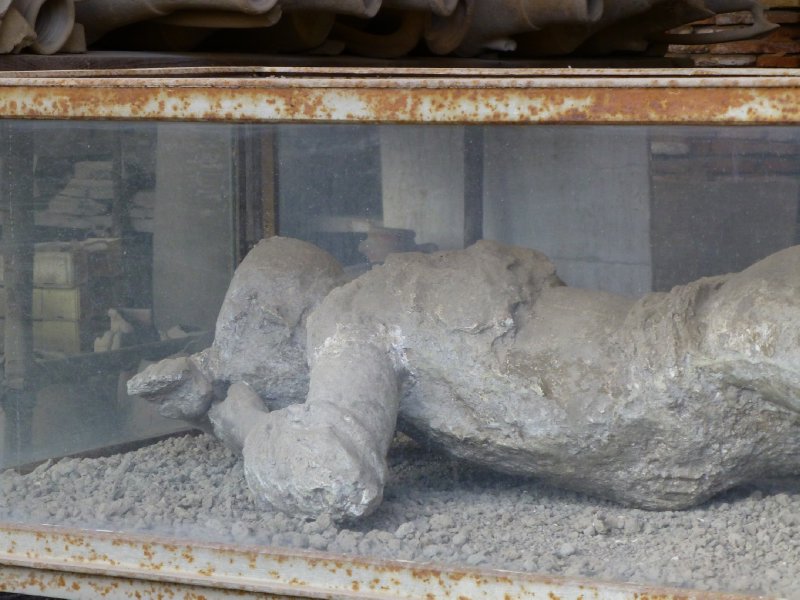 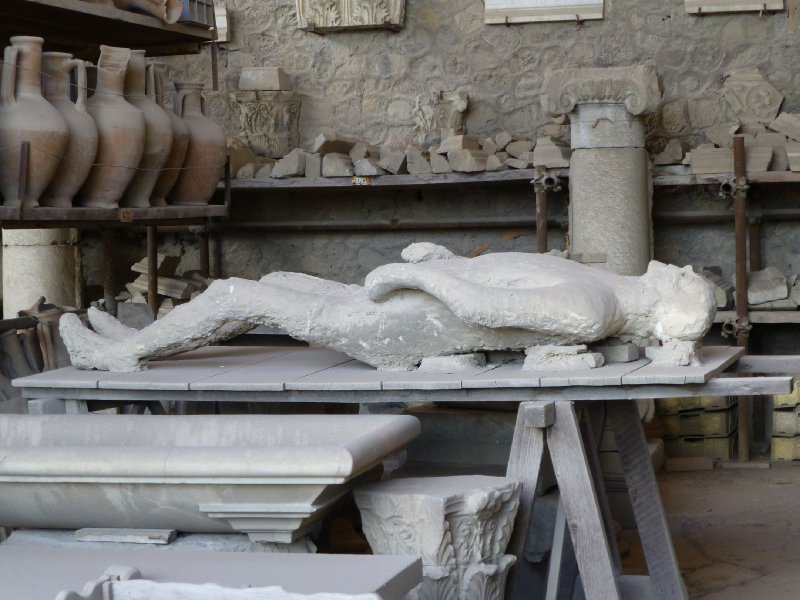 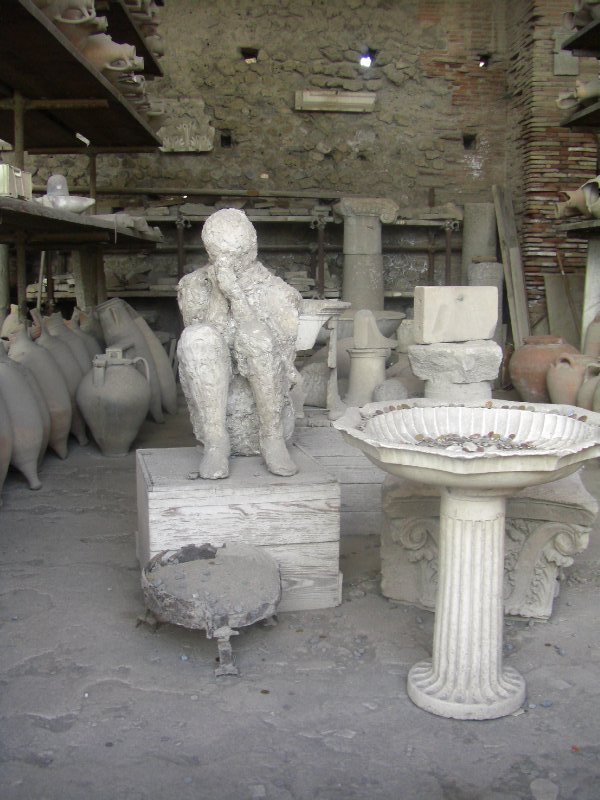 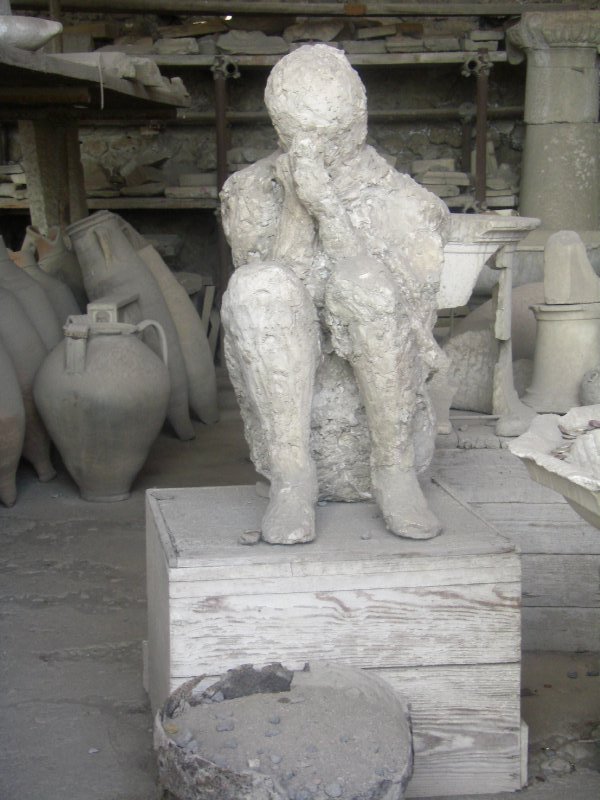 (Some of the casts are in context at an area called the Garden of the Fugitives. We missed that area entirely during our visit.)

As we work our way through Pompeii, we seek out some of the more famous buildings. Unfortunately, due to neglect and the elements, some of the buildings have experienced significant degradation (there was a collapse at the House of the Gladiators in 2010). For this reason, some of the major buildings are padlocked or chained. 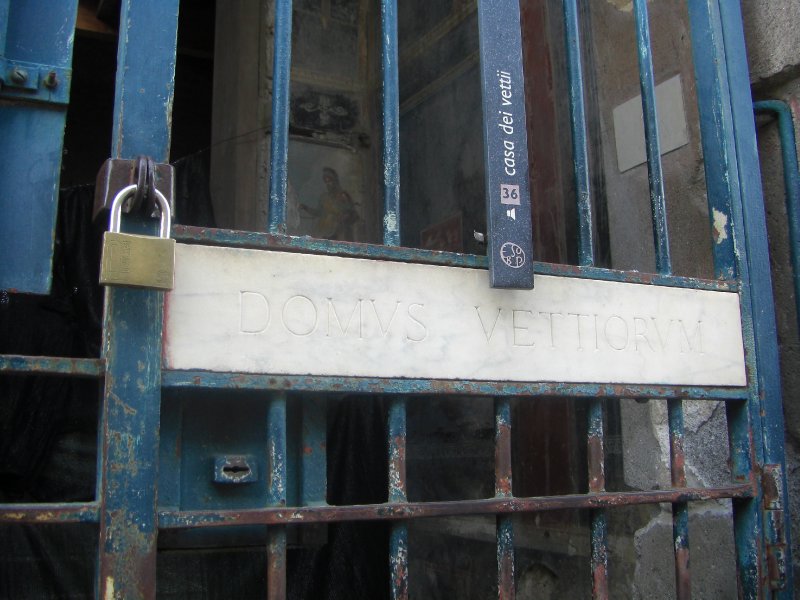 We do have the opportunity to see the House of the Faun. This is of particular interest to us...it contains two iconic artifacts of Pompeii, the elaborate "Alexander the Great" mosaic, and the "Dancing Faun". Both of these, visible in situ, are reproductions. We had the opportunity to see the originals back in 2011 in the Naples Archaeological Museum (see my blog entry "Sweet Napoli" ) 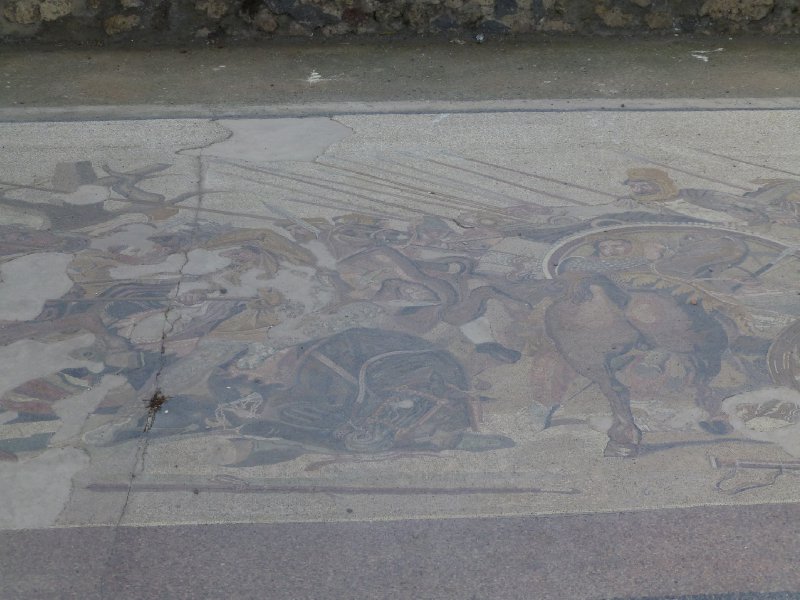 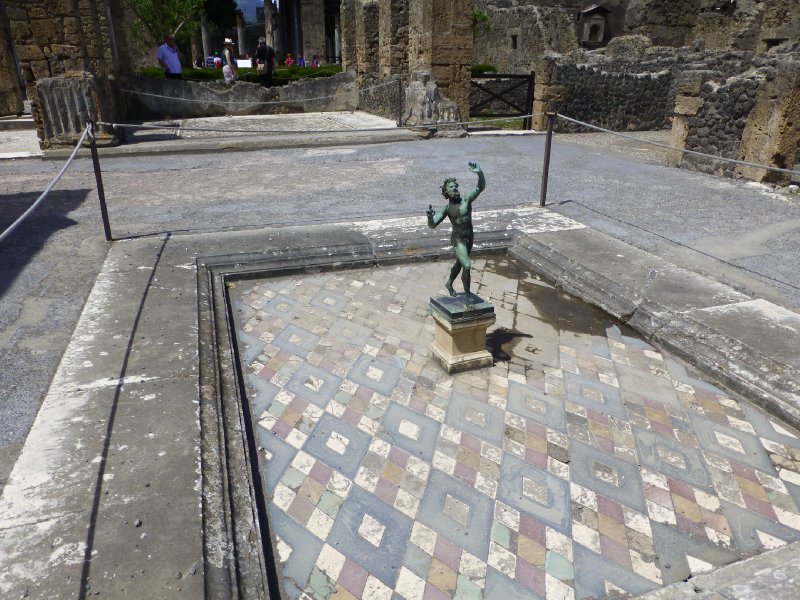 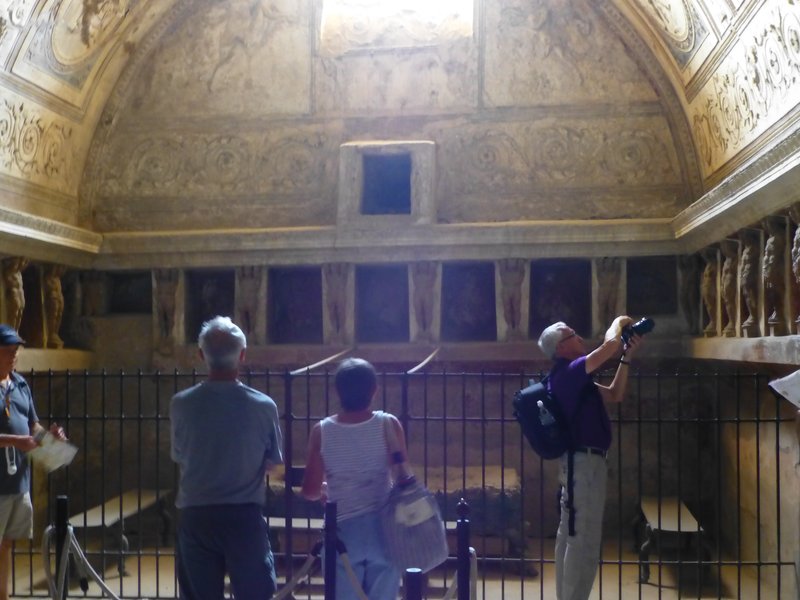 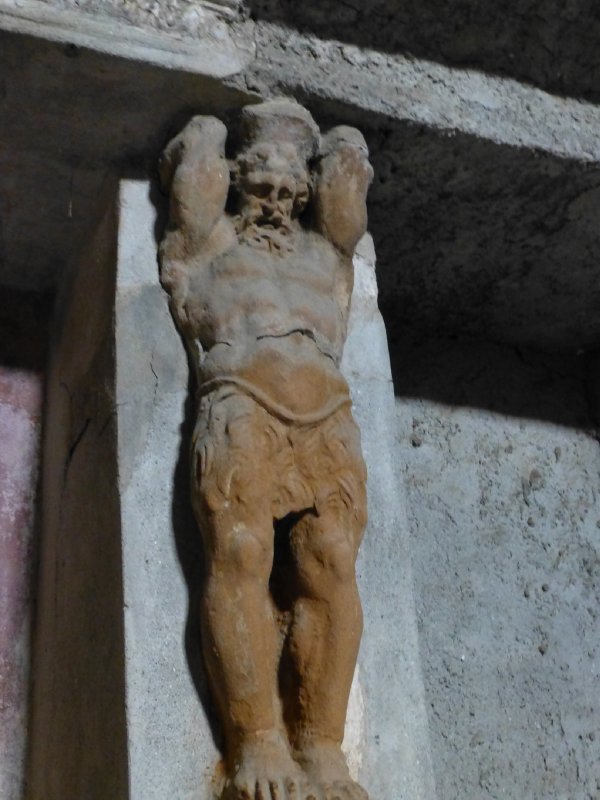 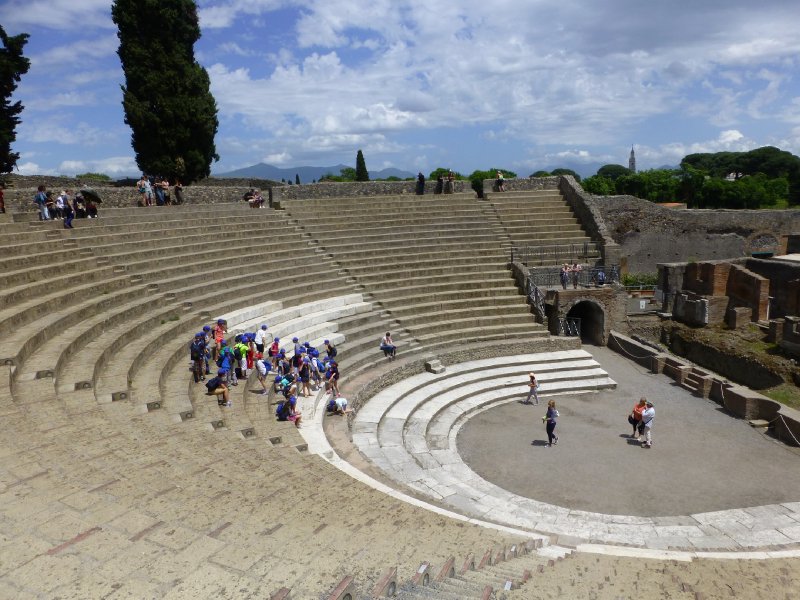 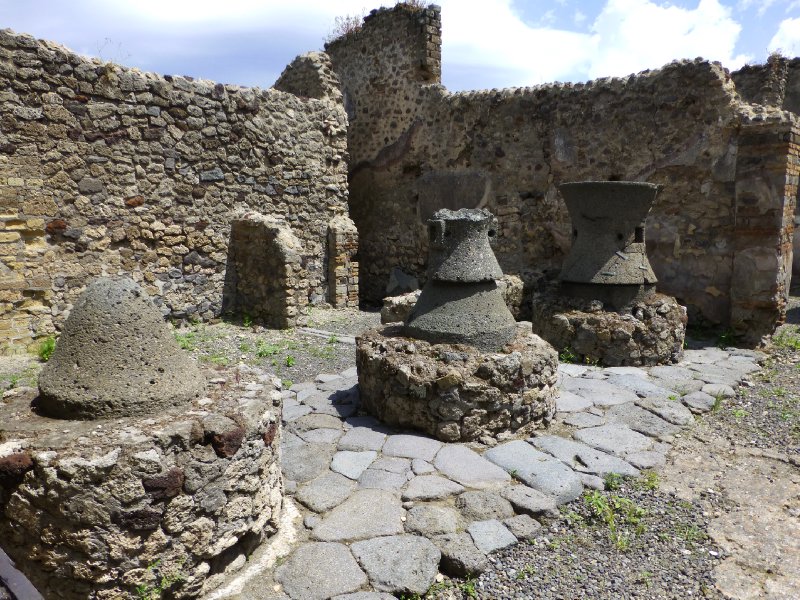 The afternoon wears on, and we'd like to get in a visit to Ercolano (Herculaneum). Ercolano, a seaside town, was also destroyed by the eruption of Vesuvius, but the primary culprit there was a searingly hot pyroclastic flow, rather than the slow accumulation of ash that suffocated Pompeii. It is a much smaller set of excavations, as it is under the existing modern city of Ercolano, so only a few square blocks are available to visitors. 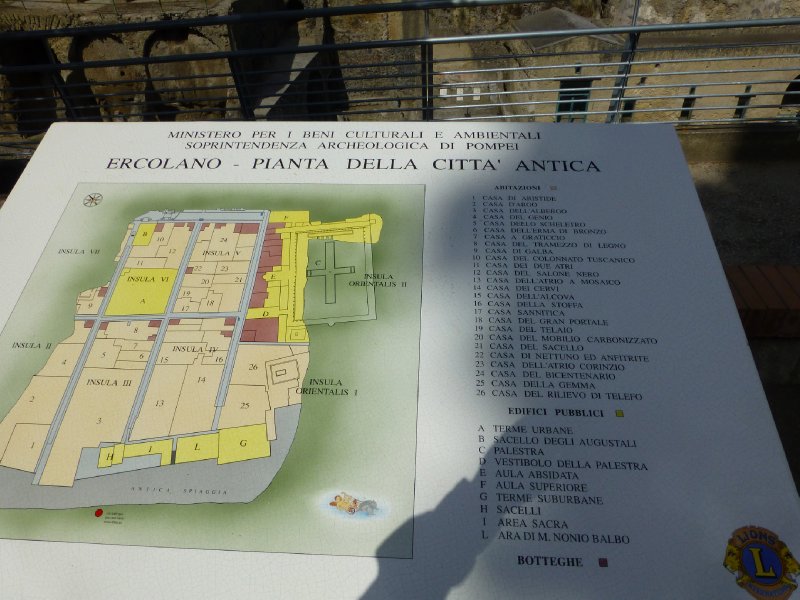 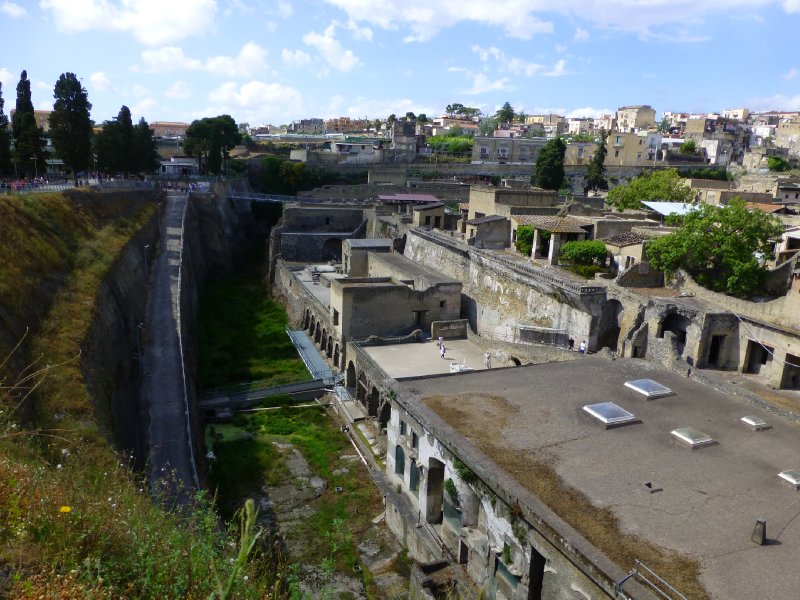 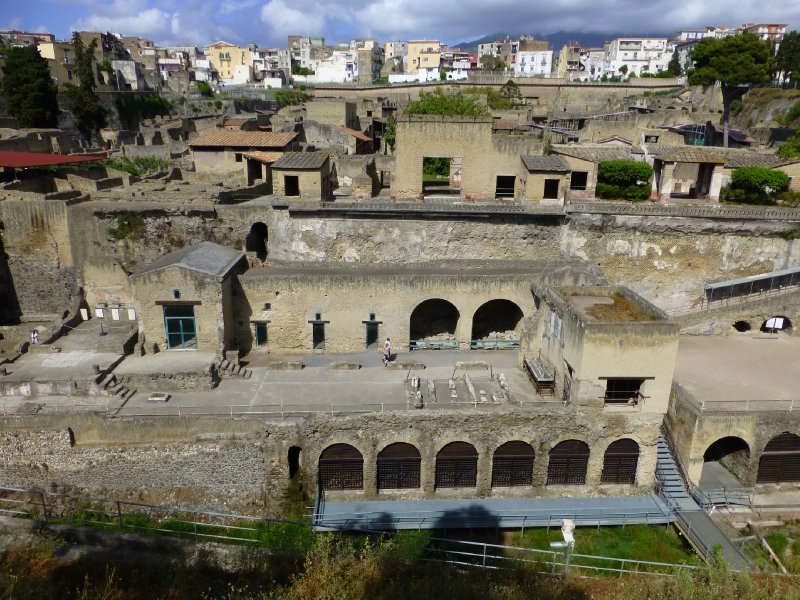 The portions of the excavation that are open to visitors are in an astounding state of preservation. Frescoes that once adorned stately homes are still relatively intact, with vibrant colors. 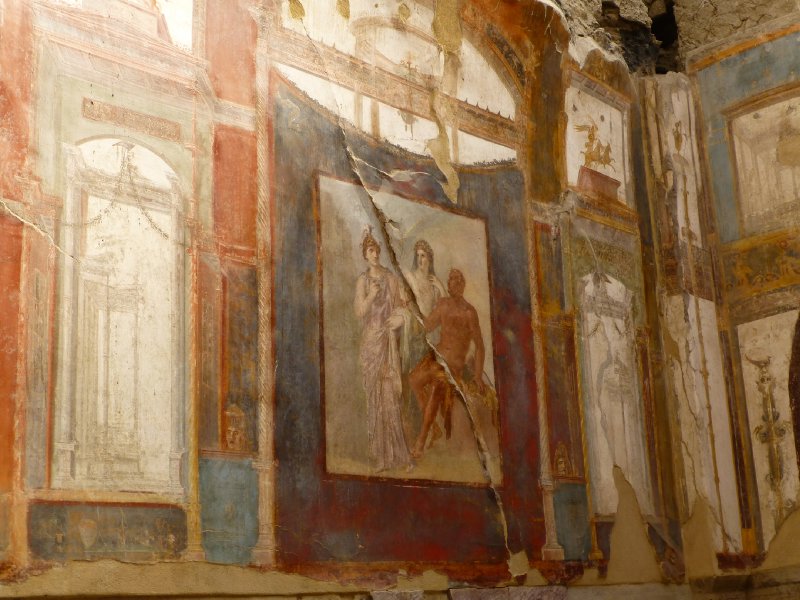 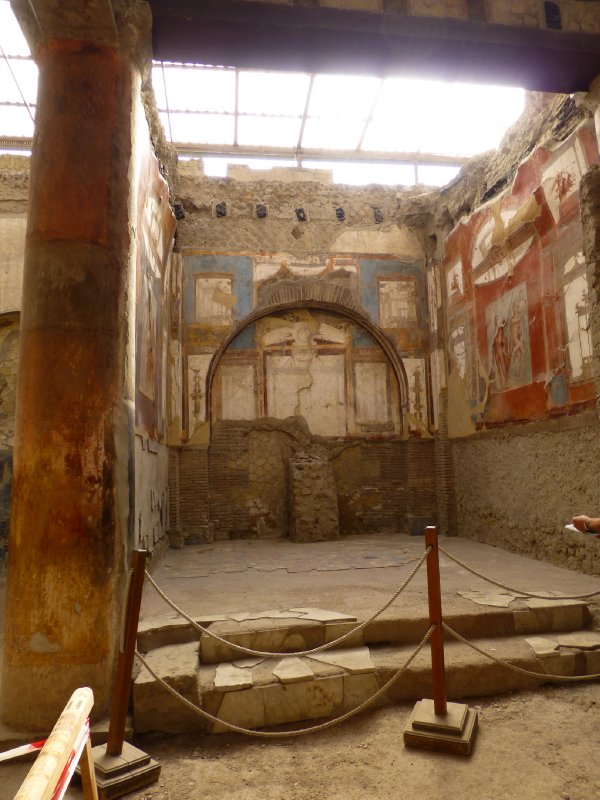 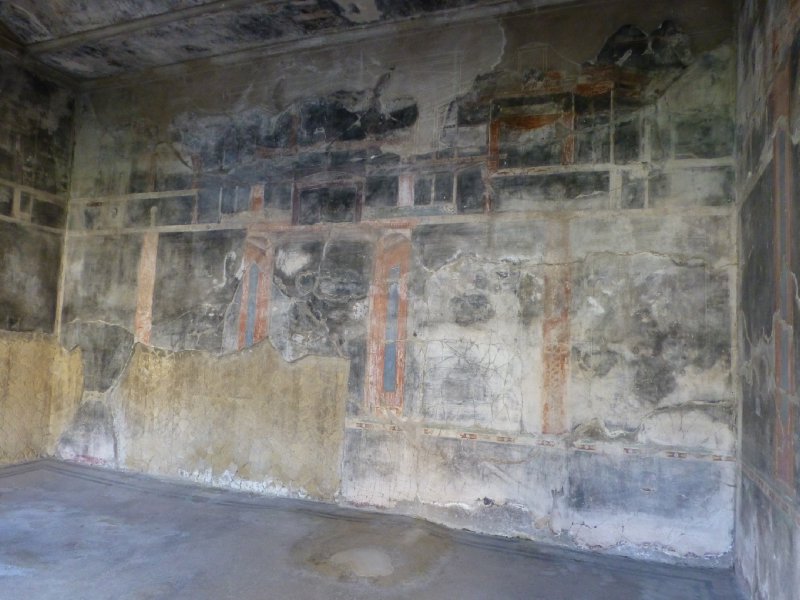 Ancient infrastructure is still in place. We pass a Thermopolium, where it looks like the food counter is waiting to be stocked. A cutaway in a nearby wall shows the sophistication of ancient Roman plumbing. 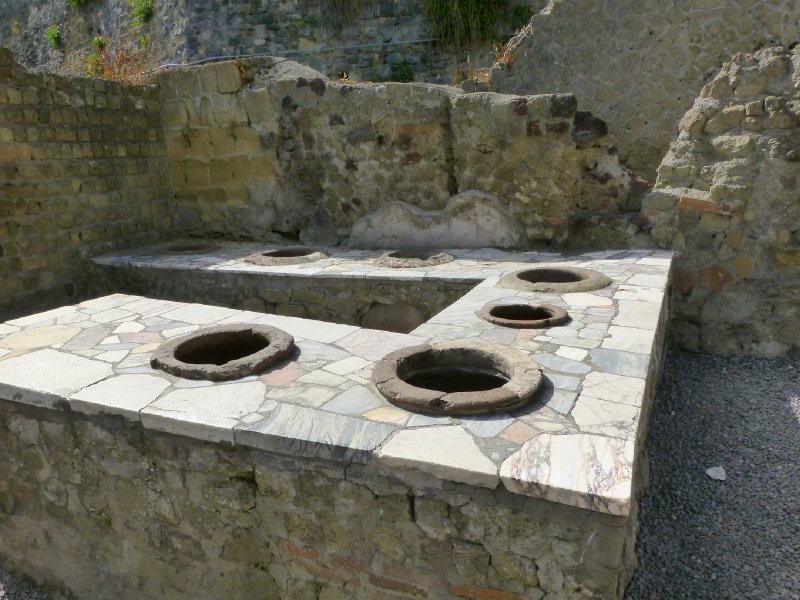 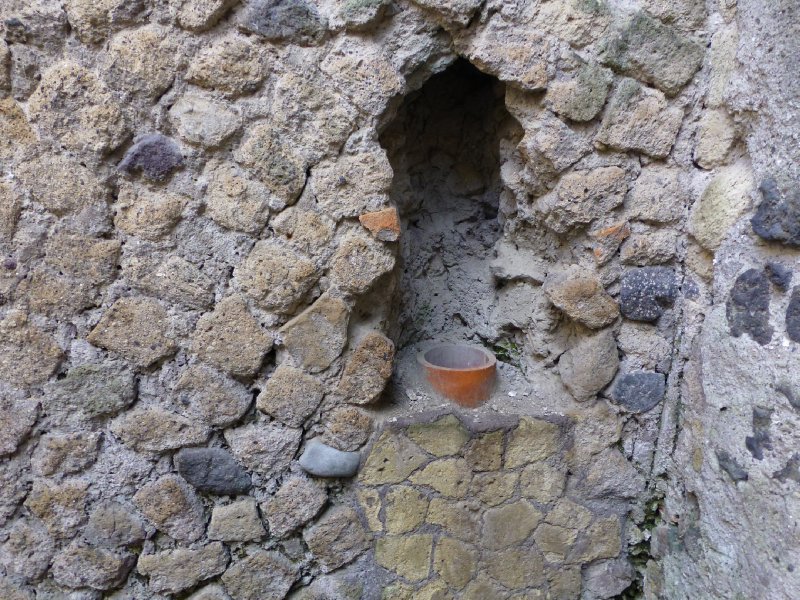 In some homes and shops, the intense heat of the pyroclastic flow carbonized all of the woodwork into charcoal. 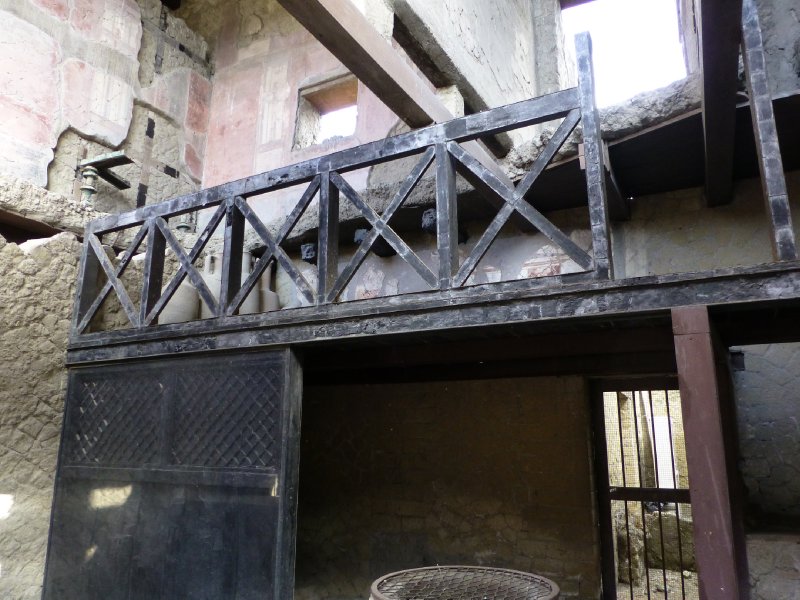 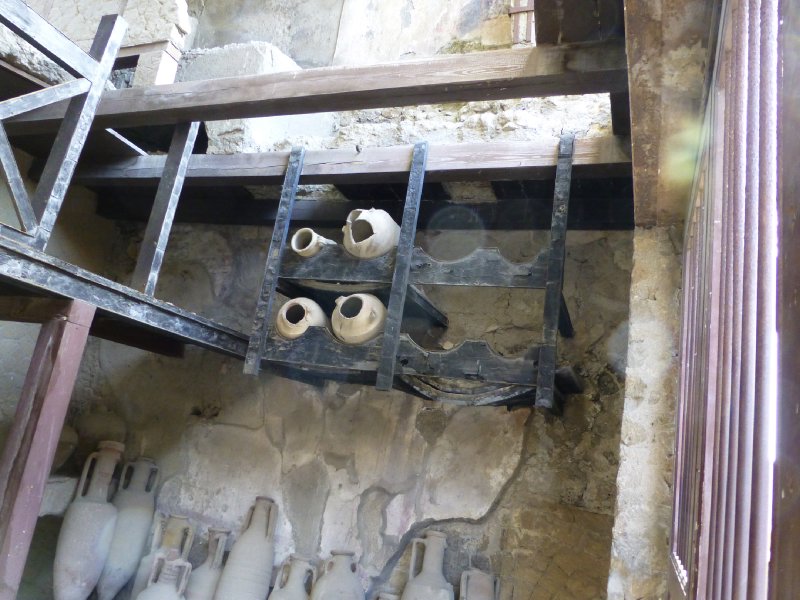 In other homes, fragile mosaics and beautiful frescoes have been preserved. 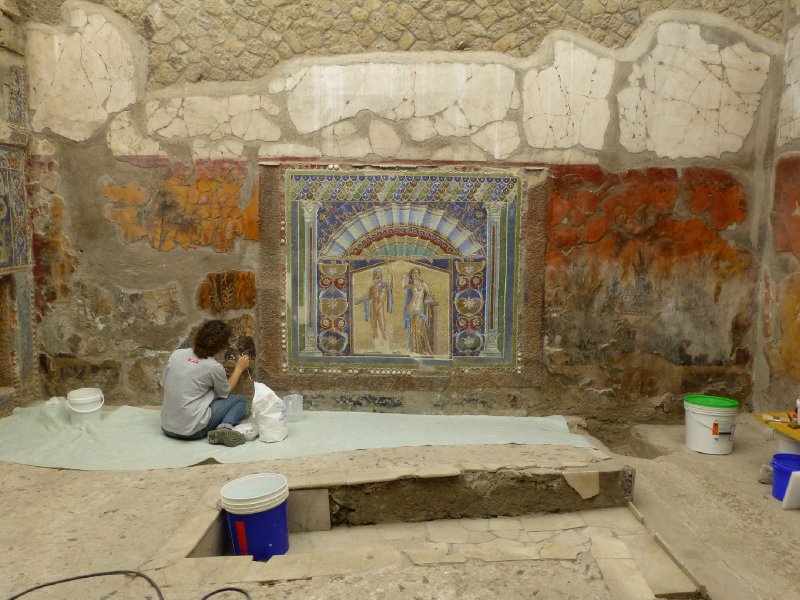 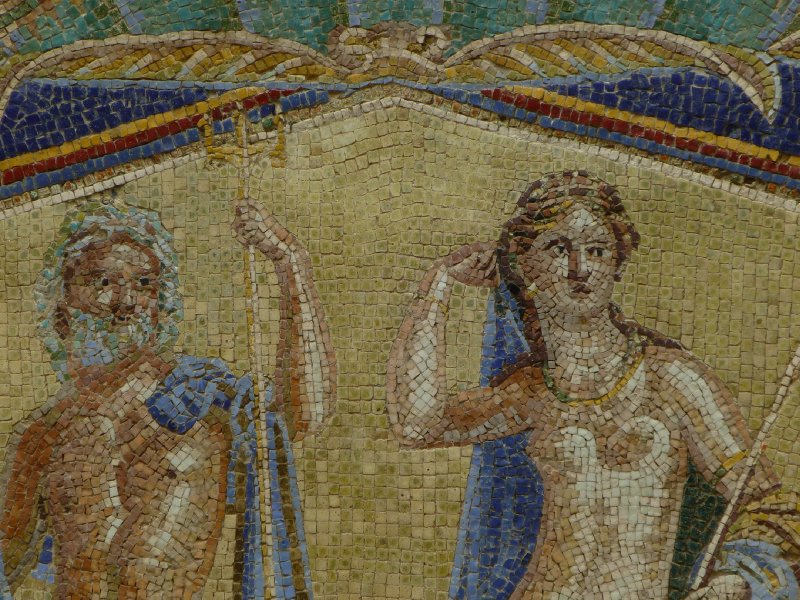 A restoration project is ongoing, and we have the opportunity to watch a conservator at her painstaking work.

Exiting the site, we pass the old warehouses beneath the town, with openings facing the sea. Many sought refuge here from the relentless onslaught of Mt. Vesuvius. Centuries later, their cracked and scorched bones were found, huddled in groups in these warehouses. 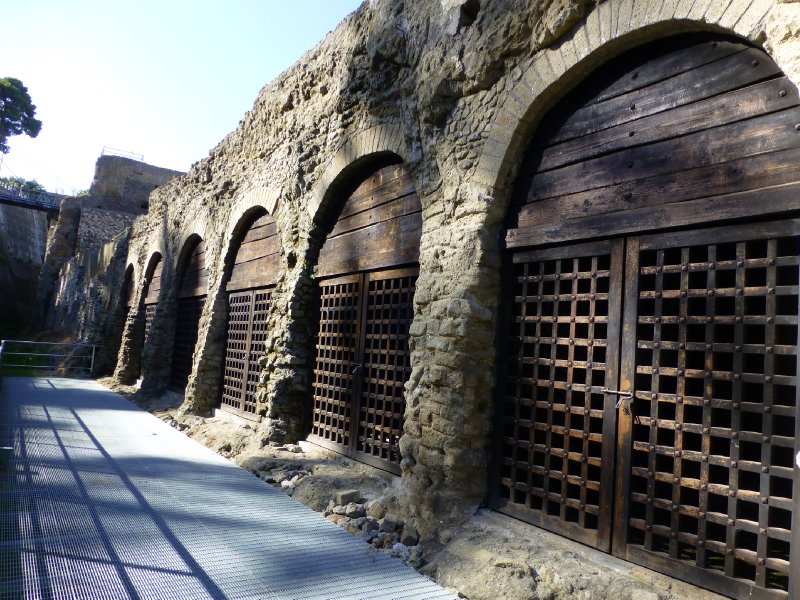 It's been a rewarding day. Pompeii is vast and iconic, while Ercolano is a small, intimate glimpse into the destruction of a community. Both are deeply affecting.

We head back to Sorrento on the Circumvesuviana. Tonight, we'll enjoy a dinner at Zi'Ntonio's again, feasting on their fine Neapolitan style pizza. 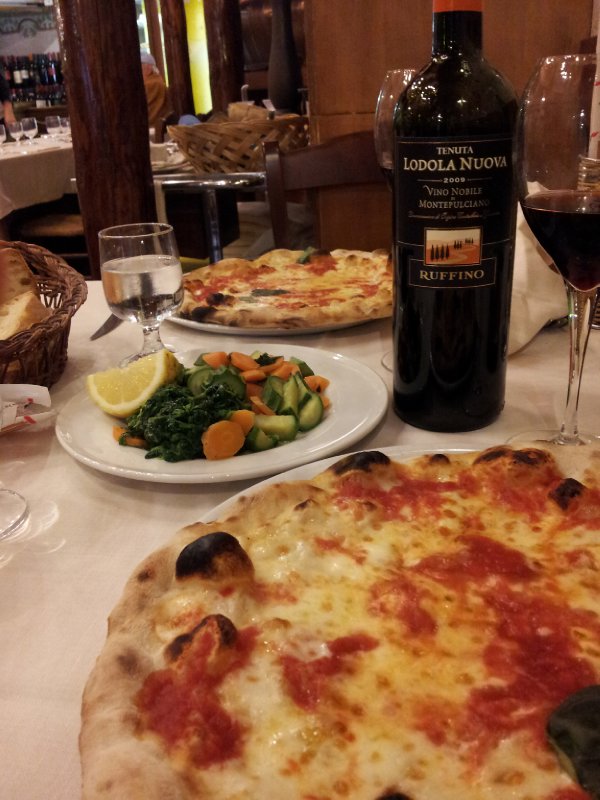 Next installment, we'll be heading to the island of Capri.